On Monday evening, President Donald Trump stood at the front of the White House’s briefing room and uttered yet another proposal that lacked both specifics and any probability of becoming a reality. “So, we’re looking very seriously at a capital-gains tax cut and also at an income-tax cut for middle-income families,” Trump said, echoing a promise to cut taxes before the 2018 midterms. “We’re looking at expanding the tax cuts we’ve already done, but specifically for middle-income families.”

Politically, it makes sense. Some 70% of Americans consider themselves in the middle class. (In reality, the middle class makes up around 50% of the country, although a definition is hard to nail down.) In an election year, cutting — or at least offering to cut — taxes can be appealing. In the middle of a pandemic, it’s an even sweeter promise, assuming you’re not one of the 31 million Americans who have already lost their jobs and have a lot less income to tax. Economic anxiety is through the roof and maybe the prospect of a few extra bucks in the wallet could ease some of those legitimate jitters.

But in trying to appeal to middle-class voters, Trump may have tipped us off to his biggest threat to a second term. Recent elections already indicate that the group has been drifting steadily away from Republicans. In 2016, Hillary Clinton carried 49% of voters earning less than $100,000 annually, outpacing Trump by 4 percentage points. Two years later, Democrats boosted that support to 56% to carry the midterms and recapture a majority in the House.

Hours before Trump spoke at the White House, a bipartisan pair of respected pollsters released their latest polls taken in battleground states. Their findings: white voters in the middle class are defecting from Trump at a pace that could send him into history books as a one-term President. The bipartisan Georgetown University Institute of Politics and Public Service/ Battleground Poll puts the slice of the electorate in the middle class around 59% — a chunk you cannot ignore. Specifically, they found, white voters in the middle class presently account for 46% of the electorate.

Within that group, deep problems lurk for Republicans, who historically have banked those votes. Back in October, the pollsters found Trump with a 9-point advantage over a generic Democrat among white middle-class voters. By the first week in August, Biden claimed an 8-point advantage over Trump. “Normally, a successful nationwide Republican campaign is winning a majority of middle-class voters, driven by winning white middle-class voters by 20 points,” Republican pollster Ed Goeas writes. “For many of the reluctant Trump supporters who were willing to put up with his persona in exchange for economic prosperity, the current economic climate no longer upholds this bargain.”

If that sentiment holds steady, it could mean a disaster for both Trump and other Republican candidates lower down the ballot. Those middle-class voters have been the GOP’s insurance policy against rock-ribbed support among Black voters for Democrats. With the electorate expanding via vote-by-mail options and a new energy on the Left over a Civil Rights renaissance, Republicans may need more than a phantom tax cut for the middle class to hold the line. 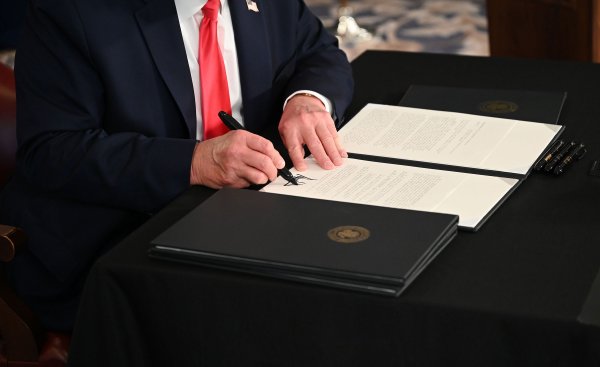 Trump Lays Dangerous Trap for Democrats
Next Up: Editor's Pick