Ollie Arviso, a production manager at World Central Kitchen, an NGO that provides food to the hungry, says his job delivering supplies to those on the Navajo Nation is more than just a job for him. Arviso recently lost his uncle and cousin to the coronavirus.

“I’m not just here for a job. I’m actually coming here to do something because I lost loved ones,” Arviso says in a video series TIME is producing with Katie Couric. “It’s been hard but that’s my drive to continue to help the reservation. This virus—we need to get rid of it.”

World Central Kitchen says it has “packaged and delivered (…) half a million meals to the Navajo Nation.”

Dr. Loretta Christensen, chief medical officer at Navajo Nation, tells Couric she is grateful for the support and that it is needed now, more than ever.

“It is crucial that when somebody is told to go home and quarantine or isolate that we give them the tools to survive during that time and to stay well (and have access to) nutritious, healthy and culturally appropriate food,” she says.

Christensen says the Navajo Nation documented their first COVID-19 case on March 13. Cases gradually increased through March, the trend became even worse by the beginning of April and hit its peak in May. She says Navajo Nation, which spans 27,000 square miles in the Southwest with a population of 170,000, has recorded more than 11,000 positive cases and more than 400 deaths. She says they have “the most cases per capita in the country and as many cases as some of our small states in the U.S.”

The Navajo Nation faces additional challenges as some people have no running water and many live in multigenerational homes in very small spaces. “We’re trying to promote social distancing and it’s just physically impossible,” Christen says. The region also has a high prevalence among the population of diabetes and cardiovascular disease — preexisting conditions that can worsen COVID-19’s effects.

Still, she tries to remain hopeful. “Even though we grieve every day for our losses, we are so grateful that there’s been over 6,000 people that have recovered,” she says.

See the full interview in the video above. 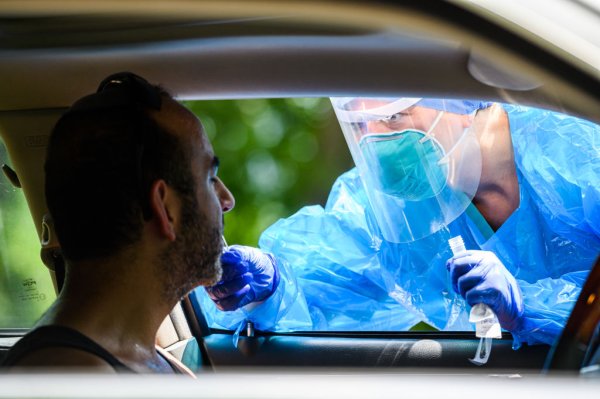 5 Million People in the U.S. Have Tested Positive for COVID-19 as Surges Continue Around the Country
Next Up: Editor's Pick