A police officer in Logan, Utah, was fired after a state investigation concluded he “mishandled” explicit photographs that were used to extort University of Utah student Lauren McCluskey, the Logan Police Department announced Friday.

In October 2018, 21-year-old McCluskey told the University of Utah Police Department that her ex-boyfriend Melvin Rowland was extorting her for money by threatening to release explicit photographs of her. She then sent those photographs to Officer Miguel Deras, the on-duty campus police officer, according to a report summarizing the Utah Department of Public Safety’s (UDPS) investigation into Deras’ conduct. A little over a week later, McCluskey was shot and killed by Rowland, who later died from a self-inflicted gunshot wound.

The UDPS investigation began after the Salt Lake Tribune reported back in May that Deras had inappropriately downloaded, shared and bragged about the photos of McCluskey to his co-workers. The Tribune reported that Deras had saved the photos to his personal phone. However, the investigation did not find evidence that Deras had downloaded the images or sent them to “anyone other than the detective assigned to the case,” Chatman said in his statement. However, as the Tribune notes in its coverage, the report says Deras had gotten a new phone since McCluskey’s killing and “the information which was ultimately recovered may have been the products of backups (or partial or incomplete backups) from the previous phones he had owned.”

The UDPS’s investigation found that Deras showed the photographs of McCluskey to “a small number of officers” who “inappropriately commented on the photos before, during or immediately after a shift change briefing,” the University of Utah’s Chief of Police Rodney Chatman said in a statement on Wednesday. “I am deeply disturbed by this finding and disappointed in the officers who were present and who did not report this incident through appropriate university channels.”

“Our continuing efforts to hold sacred the public’s trust and our duty to serve and protect has resulted in today’s decision,” Logan Chief of Police Gary Jensen said in a statement.

Chatman also said the University of Utah is “pursuing action against individual officers based on the findings in [UDPS’s] report.”

Deras’ attorney Jeremy Jones released a letter in response to the UDPS’s investigation on Wednesday, saying, “This report directly falsifies virtually every aspect of the Tribune’s original reporting and roundly corroborates Officer Deras’ account of events as released on May 19, 2020. Contrary to the prior reporting Deras did not inappropriately download images to his phone. He did not electronically share them with another officer… He is not, nor has he ever been, a boogeyman.”

When asked for comment on Deras’ firing from the Logan Police Department, Jones told TIME, “Unfortunately this is what happens when you have somebody get tried in the media. We really perceived the original reporting in this story to have been thoroughly debunked and falsified. Unfortunately, that hasn’t stopped the public pressure campaign from costing Miguel Deras his job.”

“This is a clear attempt to obfuscate,” said the Tribune’s Senior Managing Editor Matt Canham when asked to comment on Jones’ statements. “If anyone wants to know what happened here, read The Salt Lake Tribune’s investigative reporting, or read the Department of Public Safety report, or the comments from the University of Utah police chief or the comment from the Logan Police Department.”

Following the recent release of the report, students at the University of Utah protested, calling for Deras’ firing. A Change.org petition titled “Fire and Press Charges against Miguel Deras for Distributing Lauren McCluskey’s Photos,” which launched three months ago, has at least 135,446 signatures as of Saturday afternoon ET. 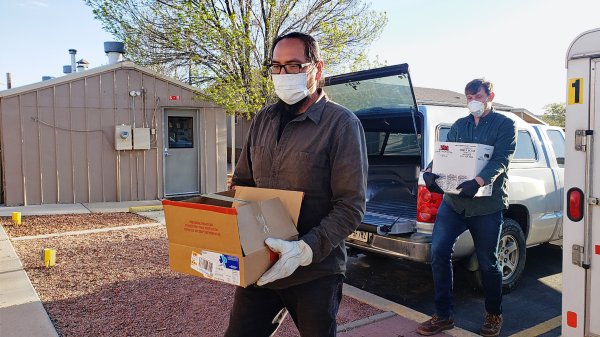 How the Coronavirus Has Affected Utah's Navajo Nation
EDIT POST