By Sanya Mansoor and Anne Most

Chris Wise didn’t plan on showing up to Black Lives Matter protests as a medic when he first started attending Portland’s demonstrations in the wake of George Floyd’s death. That changed when he kept seeing people getting hurt — in particular, a young woman who was hit in the face with a piece of shrapnel. Seeing her wounds, he realized that he needed to start coming out with medical supplies. “When you can help somebody, I feel like you kind of have a moral obligation to help somebody. You can’t see stuff and just ignore it,” he says.

Street medics in Portland and around the country—many of whom are activists themselves—have been injured by law enforcement and arrested amid the chaos as they perform their duties.

Wise and several other volunteer street medics in Portland, with the help of the ACLU, sued the U.S. Department of Homeland Security (DHS), U.S. Marshals Service and the City of Portland last month for “targeting and attacking them at Portland protests against police brutality.” Two medics who are plaintiffs in the ACLU lawsuit shared their experience with TIME in a July 25 interview. Shane Grannum, a Perkins Coie attorney representing plaintiffs, said in a statement that federal officers and Portland police “violated the constitutional rights of our clients to protest and lend medical services, supplies and treatment to protesters.” Portland protesters say that police brutality from local law enforcement was a problem long before the feds came and continues to be one, especially at protests.

Rights groups have said law enforcement is targeting street medics at protests nationwide. Human Rights Watch highlights police shoving medics and destroying their supplies in North Carolina, police firing “so-called less lethal weapons” at medics in Texas and a police officer pinning down a medic with his knee before arresting and detaining him in a crowded cell in New York.

Wise, who is biracial (his father is African American; his mother is Norwegian and German), works as a receptionist for his day-job and previously went to school to be an EMT. The protests have left him bruised and battered. Last month, he was struck with a tear gas canister in his head, leaving him with a concussion and a “fairly sizeable hematoma on the side of (his) head.” But he is still determined to continue showing because the “significant risk” to his community “outweighs the risk to his personal safety,” he says.

“You can hit me in the head with as many tear gas canisters as you want, I’m still going to show up and try and help in whatever capacity is safe for me to do so,” Wise says.

Wise was also shot in the leg months ago and the wound got infected, he’s been hit by pepper bullets and in the foot with flash bang grenades, shoved to the ground and sprained his shoulder.

He takes every Sunday off for his mental health and says he needs to compartmentalize a lot of what he sees and experiences. “I’m the type of person where it’s easier for me to have my head on a swivel and have my brain on high alert during the protests,” Wise says. “I just really can’t afford to think about it too hard during the rest of the day otherwise I’d just be upset all the time.”

Michael Martinez was arrested in Portland on June 13 “while packing up the OHSU medic tent after protesters were gassed and beaten.” “I was arrested doing one of the safest vanilla jobs as a medic, which was running a table that handed out supplies,” he says. Since his arrest, he does not wear medical insignia because he feels like medics are intentionally targeted.

Like Wise, Martinez also started out attending protests only as an activist and not a medic. “A lot of the characterization of the protest has been that we’re these violent anarchists when the only destruction is (targeted at) a racist power system; that’s what we’re out there to destroy,” Martinez says. “This country does not treat people like they are all created equal. It does not give liberty and justice to all and (…) I think it’s our duty to stand up against that.”

Martinez says being on the ground elicits a mix of emotions — “amazing moments of community” where you’re eating free ribs with fellow activists, chanting and speaking out against injustice but that these are “bookended by moments of fear” and “terror.” “All of a sudden, people are screaming for a medic, people are bleeding and there’s only chaos and you never know when you’re going to be arrested and injured.”

The Department of Homeland Security did not respond to TIME’s request to comment. Spokespeople for the Portland mayor’s office and and U.S. Marshals Service said they do not comment on pending litigation.

The Trump Administration signaled about a week ago, per Oregon Gov. Kate Brown, that it would start withdrawing federal officers from Portland. However, the DHS said in a statement on Aug. 4 that “there has been no reduction in federal presence” and “federal law enforcement remain in Portland at augmented levels.” Protests and the ensuing response from law enforcement appear to have calmed down recently but became tense again as police declared an unlawful assembly outside a precinct Thursday night, according to the Associated Press.

It’s not just medical expertise that Wise uses on the ground; he also relies on bad humor to ease the collective mental health of protesters and add some levity amid the chaos. (Martinez confirms that his jokes are indeed, bad. “Every time he gets injured, he comes up with another bad dad joke,” he says.)

Wise says that as an African American there have been several instances in his life where law enforcement has treated him unfairly. “When you explain that to people (…) everyone wants to make sure that you rule out every single thing that may not have happened before they can finally say yeah, that was probably racist,” Wise says. “I’m not necessarily mad at the racism itself so much as everyone’s willingness to try and ignore it.”

With additional reporting by Dori Sotirovska 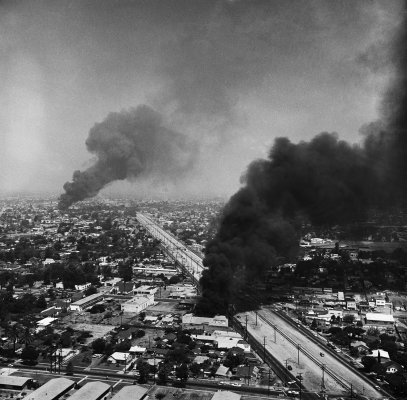 The Watts Riots Show Black History Is Full of Heavy Memories
Next Up: Editor's Pick