How Maine's Lobster Industry Got Trapped in Trump's Trade Wars

A lobsterman measures the size of a lobster on a lobster boat at a dock in Stonington, Maine, on Feb. 4, 2020.
Wang Ying—Xinhua/Getty Images
By John Walcott / Spruce Head, Maine

Standing on the deck of the Captain Carl, his 34-foot lobster boat, Jeff Woodman reflects on how the rocky shores of Spruce Head, Maine, have become an unlikely frontline in both President Donald Trump’s global tariff wars and America’s battle against the coronavirus pandemic.

“Lobstering has been a family business. I’m third-generation,” says Woodman. “But it’s changing.”

Maine’s world-famous lobster industry is sinking. For years, China had been the top buyer of U.S. lobster, 80% of which is caught off the state’s coast. But when Beijing retaliated for a second round of U.S. tariffs on Chinese goods, it slapped a 25% levy on the elite treat and reduced its tariff on Canadian catches. As the Trump Administration continues battling with the E.U., Europe, too, has been buying more from Canada; Ottawa and Belgium signed a trade deal three years ago that eliminated tariffs on Canadian lobster, while U.S. catches retain an 8% tax.

As a result, by early this year, Maine’s year-on-year lobster exports to China and Europe had both dropped by about 50%. The market for Homarus Americanus has shrunk to little more than domestic consumption and a limited number of wealthy epicures in Singapore, South Korea, the United Arab Emirates, and Qatar, says Annie Tselikis, the executive director of the Maine Lobster Dealers’ Association.

“Then comes COVID,” Tselikis says. The major U.S. buyers of Maine lobster – casinos, cruise ships, restaurants, resorts, and corporate campuses — all shut down. The state’s lobstermen and women are still venturing out, but about a third of them have received nearly $15 million in federal Paycheck Protection Program loans to help them cope with the COVID-19 related losses.

Mainers aren’t used to being caught up in national crises, other than wars. Despite the long tradition of Beltway residents flocking to the state each summer, America’s Vacationland has an ambivalent relationship with the federal government. Policies and programs devised with good intentions in Washington haven’t always survived the voyage Down East as well as a plane full of live lobster can make the 10-hour trip in a “cloud pack” – tails down, claws up – from a warehouse in Spruce Head to Europe.

Nevertheless, the northeastern state and its embattled lobstermen and women have become one of many focal points in the upcoming election. As Republicans seek to hold on to their Senate majority, Maine is home to one of the toughest races, in which Republican Sen. Susan Collins is locked in a tight race with her well-funded opponent Sara Gideon, the Democratic speaker of the Maine House of Representatives.

With control of the Senate and presidency at stake, one of the nation’s least populous states has assumed a disproportionate political importance. Trump visited the inland city of Bangor on June 5 and threatened to slap a new tariff on European cars if the Europeans didn’t immediately eliminate their tariff on American lobster. On June 24, he ordered the Agriculture Department to offer the lobster industry a bailout similar to those given to farmers also caught in his trade war with China.

So far, the results of those efforts only appear to have validated decades of local Republican skepticism about the federal government’s competence to manage the economy. Representatives of the $1.4 billion-a-year lobster industry, along with Collins and Maine’s independent Sen. Angus King, who caucuses with the Democrats, and the state’s two House representatives, Democrats Chellie Pingree and Jared Golden, have met with staffers from the U.S. Department of Agriculture and its Foreign Agricultural Service, only to find that the department, not surprisingly, doesn’t know much about lobstering. At one meeting, an Agriculture Department representative asked a member of the Lobster Dealer’s Association, “Why don’t you just concentrate on China?”

The state’s politicians have found themselves tutoring government bureaucrats who are more familiar with corn than crustaceans while they try to understand why they’re trapped in a battle over China’s poaching of American technology. “It’s very frustrating to be caught in a trade war over intellectual property,” says Tselikis. “It’s not like the soybean industry. We’re sort of in a no-man’s land.”

Not only have lobster sales plummeted, keeping a lobster business running has become harder as Trump’s tariff wars have escalated, says Woodman. The burly lobsterman says bait and fuel are more expensive, as are digital water thermometers and the satellite technology and color screen he uses to navigate Penobscot Bay. Lobster pots, now made of steel instead of wood, cost $70 to $90 each, thanks in part to Trump’s tariffs on Canadian steel, he says. A new boat, he adds, can cost $100,000.

Even if there is a truce in the trade wars, lobstermen are facing heavy seas ahead. Over the past 15 years, Gulf of Maine has been warming faster than 99% of the world’s other saltwater bodies, according to a study from the Gulf of Maine Research Institute, and lobster are migrating to cooler waters. The state’s fleet is aging, access to capital is limited, and wages are dropping. A “sternman,” who baits and sets the traps and hauls them in, used to make $30,000 a year, but is now making about $23,000, according to Woodman. Entry level jobs in the industry pay $15 to $17 an hour, says Tselikis.

Without newcomers willing to apprentice themselves, learn the trade, and spend long hours on wet slippery decks in cold seas at that pay grade, it has become harder to find crew members. Sometimes Woodman’s 74-year-old father, for whom his boat is named, and his seven-year-old son help crew for him.

The influx of funds from the forgivable PPP loans has helped some people in the industry. According to the Small Business Administration, some 1,360 Maine lobstermen – about one in every three – have received loans of less than $150,000, more than workers in any other industry in the state. But as in other industries, the biggest players got more from the federal trough. Four of the state’s largest lobster companies hauled in $350,000 to $1 million, according to the SBA.

Those who didn’t get enough federal cash to weather the multiple crises facing the industry are learning to adapt. Some, like Woodman, are shipping their catch to processing plants in neighboring New Brunswick, which then sell them, tariff free, to China and Europe and back to customers in the U.S. He and others also are capitalizing on the market for frozen lobster, usually tail and claw meat, but now also entire crustaceans. “Everybody’s trying to think outside the box,” Woodman says. 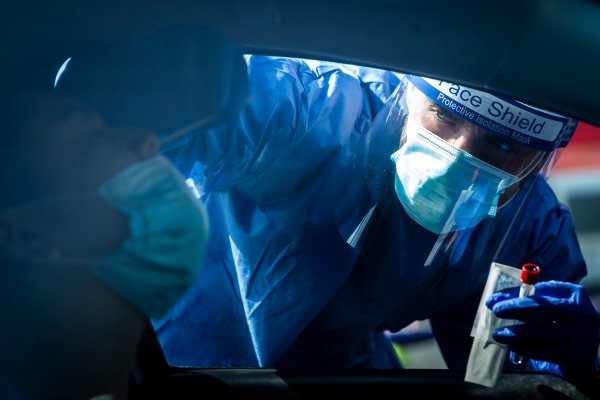 America Needs to Rethink Its COVID-19 Testing
Next Up: Editor's Pick