'It Was Like a Kidnapping.' Distressing Video Shows NYPD Tackling Teen Protester, Forcing Her Into Unmarked Van

New York City police officers aggressively arrested a teenage protester by forcing her into an unmarked van during an anti-police brutality demonstration in Manhattan on Tuesday.

Several videos posted online show NYPD officers pulling the protester into an unmarked silver minivan at the corner 2nd Avenue and 25th Street. As demonstrators congregated on the scene to call attention and challenge the arrest, additional officers surround the van and use their bicycles to fend off protesters.

Footage of the incident quickly went viral and criticism over the NYPD’s tactics grew Tuesday night. The use of an unmarked van in arresting the protester — identified by friends as an 18-year-old transgender woman named Nicki (or Nikki) — has drawn comparisons with recent incidents in Portland, Ore., where federal agents used unmarked vans to arrest people.

“Our civil liberties are on the brink. This is not a drill,” Rep. Alexandria Ocasio-Cortez tweeted. “There is no excuse for snatching women off the street and throwing them into unmarked vans.”

The NYPD tweeted that the woman who was arrested “was wanted for damaging police cameras” and that officers from the department’s Warrant Squad were “assaulted with rocks and bottles” when they took her into custody, though videos from the scene do not show any such behavior on the protesters’ parts.

In a statement to TIME, the NYPD said Nicki was charged with criminal mischief and making graffiti. The NYPD also deadnamed her in the statement.

Carlina Rivera, a New York City Councilwoman who represents the district where the arrest occurred, said early Wednesday that the woman had been released. Rivera, along with multiple other New York City officials, called for an independent review and an explanation for why police are using unmarked vans to detain protesters.

New York City Mayor Bill de Blasio said the NYPD’s violent arrest of the protester was “troubling” in light of the federal policing tactics in Portland. (In a July 20 tweet, de Blasio wrote that similar incidents in the city were “divisive and dangerous.”)

“This is not Portland. What you see on the video is NYPD officers,” de Blasio told reporters Wednesday morning. “That was not the time and the place to effectuate that arrest.”

De Blasio said the woman was arrested for damaging police property, adding, “No one is allowed to damage police property. My message to everyone is if you’re out there protesting, protest peacefully.”

Protesters at the scene at the time of the arrest disputed the police’s claim that the demonstrators were violent and used rocks and bottles against officers.

“None of that happened whatsoever. We literally turned the corner and were met with a line of police who attacked us without warning,” Clara Kraebber, 20, told Gothamist. Kraebber said police were using pepper spray “seemingly at random” while they were making the arrest. “They were trying to make it painful to be there,” she added.

Another demonstrator, who identified himself as Derrick, said police were targeting Nicki specifically.

“Suddenly there was an unmarked grey van that moved out in front of us that had been waiting for us,” he told Gothamist. “Four guys jumped out and a line of police bicycles came out from down the block. We hadn’t seen them. They pushed us back. They grabbed Nicki like she was a rag doll … They had her arms on her neck and then they drove off.” 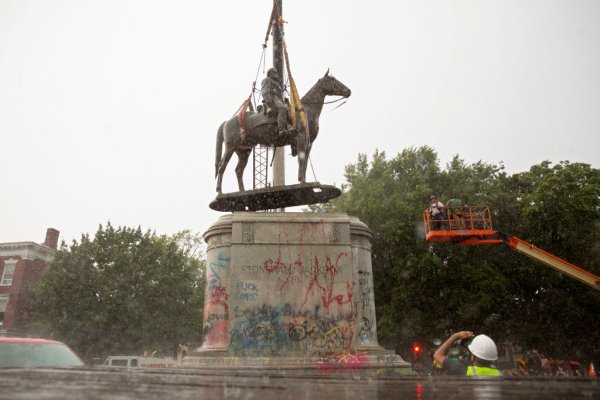 Confederate Monuments and Other Disputed Memorials Have Come Down in Cities Across America. What Should Take Their Place?
Next Up: Editor's Pick