A North Korean Defector Likely Fled Back Across the Border After He Was Accused of Sexual Assault in South Korea, Officials Say

The North Korean village of Gaepung-Gun is seen from the Odusan Unification Observatory near the border in Paju, South Korea, on Wednesday, in Paju, South Korea, on Wednesday, June 17, 2020. North Korea said it would deploy troops into areas on its side of the border where it had joint projects with South Korea, further escalating tensions with its neighbor a day after destroying a liaison office the two once shared.
SeongJoon Cho–Bloomberg/Getty Images
By Jeong-Ho Lee / Bloomberg

A defector was suspected of evading South Korean border guards by going through a drainage ditch and swimming back to North Korea, in a crossing that escalated tensions on the peninsula and led Pyongyang to lock down a city on virus fears.

The 24-year-old man is thought to have evaded detection by passing through a barbed wire-blocked ditch and entering a Han River estuary to the sea to the west, then swimming back to North Korea, Kim Jun-rak, a Joint Chiefs of Staff spokesperson, told a media briefing Monday.

The man was under police investigation over allegations of rape, according to Gyeonggi Nambu provincial police agency. The defector, who had fled to South Korea in 2017, was booked without physical detention last month for sexually assaulting a woman at his home, police added.

The man, who hasn’t been formally named, doesn’t appear to have been infected with Covid-19, South Korean health authorities said at a separate briefing Monday. It is not known how far the man may have swum but the journey could have covered several kilometers.

The crossing comes as North Korea has excoriated South Korean President Moon Jae-in over defector-led activist groups in South Korea sending anti-Kim Jong Un leaflets by balloon north across the border. Last month Kim’s regime blew up a joint liaison office in the North Korean border city of Kaesong that was a symbol of Moon’s rapprochement and told Seoul that it was “high time” to break ties.

Kim Jong Un ordered Kaesong locked down after officials found a person who may be infected with the coronavirus, the state’s Korean Central News Agency reported Sunday. The report adds to speculation that the virus has reached North Korea even though the regime has yet to confirm a single case of Covid-19. U.S. and Japanese officials have said they suspect that North Korea has cases.

The person illegally returned to North Korea on July 19, prompting the government to launch a probe into the military unit responsible for the crossing with plans to “administer a severe punishment,” the KCNA report said.

North Korea shut its borders in January due to the virus, slamming the brakes on the little legal trade it was afforded due to global sanctions to punish it for its nuclear arms program. The closing further squeezed a moribund economy set for its biggest contraction in more than two decades, according to Fitch Solutions.

“if the defector is in fact the cause for the Kaesong lockdown, then North Korea doesn’t need to deny infections anymore and can blame its epidemic on defectors and imported cases from South Korea,” said Duyeon Kim, a senior adviser on Northeast Asia and nuclear policy for the International Crisis Group.

KCNA said the person had defected to South Korea three years ago, but didn’t provide details on how it was possible to return across a border guarded by tens of thousands of military personnel.

Moon has kept on track his plans to provide economic assistance to North Korea but Pyongyang has shown no interest in the president’s offers. It has been able to receive help from its traditional allies China and Russia for virus prevention.

Even though Moon may try to use this incident to offer humanitarian assistance, the inter-Korean stalemate is likely to remain, said Choi Kang, vice-president of the Asan Institute for Policy Studies in Seoul. “This would act as a barrier, not a catalyst for inter-Korean exchanges,” Choi said.

–With assistance from Sam Kim. 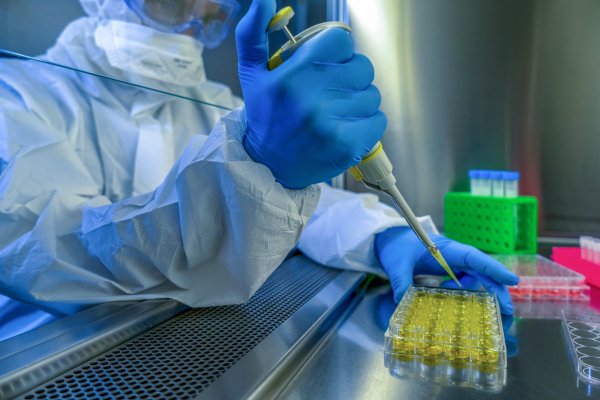 ‘We Will Share Our Vaccine with the World'
Next Up: Editor's Pick