Trump's Use of Federal Agents in Portland May Go Beyond What Is Lawful. Here's How We Can Get Answers About What's Going On

Federal officers open fire on demonstrators with 'less-lethal' weapons on July 16 at Portland Federal Courthouse
John Rudoff—Sipa USA
Ideas
By Joyce White Vance
Vance is distinguished professor of the practice of law at the University of Alabama, a former U.S. Attorney for the Northern District of Alabama and an NBC News and MSNBC legal analyst.

In questions following Wednesday’s coronavirus press briefing, President Trump conflated two very different roles for federal law enforcement, mentioning in one breath the deployment of federal agents against protestors in Portland and surging federal agents to do enforcement work in cities with high violent crime rates. Responding to a reporter’s question about presidential responsibility for violent crime in cities like Chicago, he said, “We can solve the problem very easily. We’re equipped with the best equipment, the best people. And you see what we’re doing. I mean, Portland was coming down. It was busting at the seams. And we went in and protected all the federal buildings.”

The sight we have seen in Portland over the last week, federal agents in unmarked cars and paramilitary uniforms on American streets — shooting rubber bullets and tear gas at protestors — is a shocking one. It follows federal law enforcement using “smoke canisters and pepper balls” against protesters in June when U.S. Park Police cleared protestors in Washington, D.C.’s Lafayette Park so the President could have a photo op in front of St. John’s church. Although the Administration justified the federal presence in D.C. under its special federal jurisdiction in the nation’s capital and the federal government does have jurisdiction to protect its facilities and buildings, these excessive actions are a questionable exercise of the executive branch discretion and may well go beyond what is lawful. Even if they are legal, the use of federal law enforcement capabilities against citizens exercising their rights, whether in Washington D.C., Portland or elsewhere, should not be equated with normal law enforcement activity.

But there we were with Trump at the podium.

The President didn’t explicitly call protestors—including the lullaby-singing wall of moms—who were exercising their First Amendment rights, criminals, but there was an implicit comparison. We should be concerned about that. Trump is often most clear about his intentions when he is off script, answering questions as he was when he made these comments.

Moms with interlocking arms stand with their backs up against a fence, blocking entry to the federal courthouse, in Portland on July 19
Alex Milan Tracy—Sipa USA

Our system of federalism is one where local policing is left primarily to state and local authorities. But federal law enforcement has a legitimate and important scope, supporting state and local agencies with resources and expertise, when requested. In order to do that successfully, federal law enforcement agencies have to be credible in the eyes of the public. Enforcement actions must be fair, lawful and warranted by local circumstances, both in actuality and in public perception.

There should be a sharp line between legitimate law enforcement and what appears to be an operation gone off the rails in Portland, with reports of citizens being snatched off the streets by agents who don’t identify themselves, their agency or the basis for the arrest (if you’re detained and aren’t free to leave, it’s an arrest). The Fourth Amendment requires probable cause to believe a person has committed a crime before such a seizure of them can be made. No responsible leader should try to obscure or justify improper action. Arrests can be made when an officer observes the commission of a crime, but law enforcement leaders should be candid about acknowledging mistakes when they are made. The Administration is not doing this, and the line between lawful enforcement and the improper use of federal personnel to put down civic dissent has become blurred.

When federal law enforcement surges its resources to help state and local authorities conduct a law enforcement operation, they don’t typically announce it in advance because of operational security concerns. Doing so, as the President did this week, threatening to send federal agents to cities including New York, Chicago, Philadelphia, Detroit, Baltimore and Oakland, looks more like a political stunt than legitimate law enforcement, whatever the reality is. So does his saying, “The cities, unfortunately, that are in trouble are all run by Democrats.” This President does nothing to absolve himself of allegations that he’s willing to abuse the criminal justice system to achieve political aims — in the past month alone he’s used the power of the presidency to keep his longtime friend Roger Stone from going to prison and, as a federal judge in New York ruled Thursday morning, to punish once friend, now perceived enemy Michael Cohen, who was returned to federal prison after he declined to abstain from writing a book about his relationship with the President. (Cohen has since been released.)

So it’s easy to speculate that there is something seriously wrong going on, whether that is the case or not, as the President ramps up the use of federal law enforcement in cities across the country. He has demonstrably abused his law enforcement powers and his Attorney General, William Barr, rather than providing guardrails, has enabled him. Next week, Barr is slated to testify on the Hill. He and others, like acting secretary of Department of Homeland Security (DHJ) Chad Wolf should answer serious, pointed questions about the basis for federal intervention in citizen protests, the type of action engaged in and plans for future use of federal resources in this area. Recent incidents on American streets warrant oversight. Unfortunately this Administration has been dangerously successful at avoiding the type of congressional oversight the Constitution contemplates for the executive branch. If there are legitimate justifications, for Portland, Washington, D.C., and for Chicago, where Trump has threatened to send federal forces despite acknowledging the mayor had not invited him to do so, officials should be willing to testify about it under oath in a transparent fashion, in order to help restore people’s confidence. If they are not, we are justified in drawing the inference it is indefensible.

This is the impact of damaging faith in the criminal justice system – people lose their ability to trust and the system can’t function properly. The appearance of impropriety is as destructive as actual impropriety, and in recent weeks, there has been enough of the latter that concerns are serious and faith is strained, perhaps beyond the breaking point. One thing is clear: efforts to use the power of federal law enforcement wrongfully or as a political tool that permits the President to do favors for friends and harm people he dislikes can’t be tolerated in our democracy.

As happens all too often with Trump’s Administration, we are able to identify a significant problem that no other administration could have gotten away with leaving unaddressed and are left asking, what can be done? Here, there are at least some answers. The inspectors general for the Justice Department and DHS have begun investigations into the use of federal force in Portland, and the DOJ inspector general is looking into what happened in D.C. as well. They must be permitted to proceed, unimpeded by White House interference. Congress, or at least the House, must engage in immediate oversight, enforcing that prerogative if there is not willing compliance from requested witnesses. We are entitled to the truth about what is happening in Portland and what may happen elsewhere. There is long-established precedent for congressional inquiry into the propriety of activities conducted by federal law enforcement. In Oregon, the state’s Attorney General has filed a lawsuit, challenging the federal government’s conduct in her state. Increasingly, it has fallen to the states to hold executive branch power in check. Likely, that trend will continue. And a federal judge has enjoined federal officials from preventing press and legal observers from reporting out on events in Portland, noting that “The free press is the guardian of the public interest, and the independent judiciary is the guardian of the free press.”

There is a glimmer of hope here. Many have questioned whether our democratic institutions are strong enough to withstand this President’s disregard for the rule of law. But in the wake of George Floyd’s death and the protests that have followed, we’ve seen that most important of American institutions, an engaged public, demand that flaws in our system be addressed. Internal government watchdogs, state officials, the courts and the press are now pushing back against the Administration’s efforts to quell protests in one of the most sustained efforts we’ve seen to hold it accountable in the last three years. The next Attorney General of the United States will have his or her work cut out to restore public confidence in the Justice Department’s leadership. In the meantime, preventing this Administration from using federal law enforcement in an illegitimate manner is essential to our country’s future. 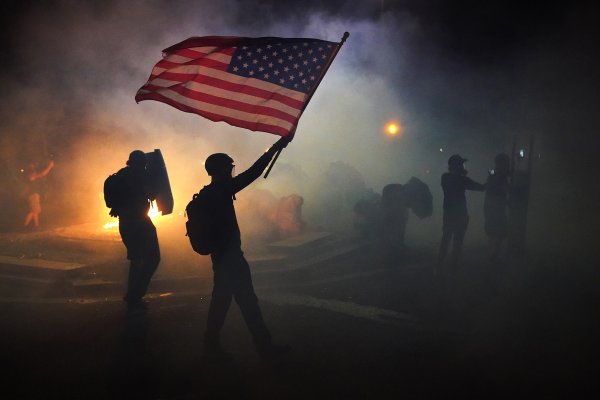 Trump's Intervention in Portland Shows GOP Has Lost Its Way on States' Rights
Next Up: Editor's Pick