Members of the Oromo community march in protest after the death of musician and revolutionary Hachalu Hundessa on July 8, 2020 in St. Paul, Minnesota.
Photo by Brandon Bell—Getty Images
Ideas
By Ribka Ayana

Ribka is co-chair of the Oromo Advocacy Alliance, which advocates for peace, justice, inclusive governance and the economic well-being of the Oromo and other peoples of Ethiopia

The June 29 murder of Haacaaluu Hundeessaa, singer and activist, has triggered a popular uprising in Ethiopia. TIME columnist Ian Bremmer described the protests in a recent piece; since he wrote it the death toll has risen to at least 289, with over 7,000 detained. Internet services were shut down within hours of the assassination, and were only restored after four weeks.

But it’s important to understand what is taking place from the point of view of the grassroots in Ethiopia. That this single event would cause such a country-wide uproar has many asking, who was Haacaaluu? What are his songs about? Why did his death evoke such an outpouring of anguish, pain, and rage?

Haacaaluu, 34, was a bold performer and artist considered a cultural treasure, particularly by the Oromo people, the country’s largest nationality, cultural and linguistic group with a population of around 40 million.

His killing has touched every young person among the Oromo and many more who had access to a radio or a playlist. Haacaaluu’s songs breathed life into an ancient art form with great skill, making his music accessible across generations as well as nationalities.

Most notably his messages propelled the politically active grassroots youth movement often referred to as Qeerroo (meaning young unmarried person) in ways that the world beyond Ethiopia is just beginning to understand.

They played the leading role in creating the political opening that brought the current Prime Minister, Abiy Ahmed, into his position. Haacaaluu’s musical messages deeply resonated with the historically marginalized who regard him as the embodiment of standing proud in their own identities.

Haacaaluu’s music provided the soundtrack for youth protests that erupted in 2014 against the expansion of Addis Ababa into Oromo territory. At the heart of these grassroots protests was the question of rights in the face of past and current land grabs that left Oromos dispossessed and strangers on their own lands. With his words playing in their ears, they persisted against brutal crackdowns to turn out en masse in the streets. This movement brought down the repressive regime of Hailemariam Desalegn, demanding fundamental freedoms and justice.

Haacaaluu’s songs highlighted deeper historical injustices and resonated deeply with those whose lands were confiscated to create Ethiopia and its capital city in the late 19th century. He spoke to their dream of building a decentralized Ethiopia that reflects the rich diversity of its many peoples. However, this desire creates alarm and fear among Ethiopians who support the kind of assimilation that created the country. From the view of the dispossessed, Haacaaluu’s assassins crushed their hopes. His death evokes anguish and rage because it symbolizes an assault on their identities, their human dignity and their deepest aspirations.

The idea that the Ethiopia is divided into ethnically-based territories by its constitutions is the issue most misunderstood in the West. It is only one one side of a major debate in Ethiopian politics today.

The constitution drawn up in 1995 starts: “We the nations, nationalities, and peoples of Ethiopia….” capturing the commitment of the country’s diverse peoples to build and live together in a multinational federation in Ethiopia that reflects the identities of all its peoples. Prior to this, the majority of the country’s population lived under governments that pursued assimilationist policies which suppressed cultural expression and diversity.

Creating constitutionally-protected multinational states was the first sign of a historic transition from autocracy to democracy. The grassroots in Ethiopia treasure the constitution and they are determined to protect it.

Surprisingly, the vision that Abiy offers now stands in contradiction to the will of the majority that brought him to power. His vision of a single national identity purports to “transcend” ethnic divisions. On the contrary, for the grassroots movements, it is a return to the assimilationist politics of the past. This vision has been tried time and again by Ethiopia’s emperors and by the Dergue military regime, which was in power from 1974 to 1987, but it has failed utterly.

The constitution enshrined multinational federation as a democratic response to the age-old question of nationality or cultural identity in Ethiopia. What is cloaked as “unity” in Abiy’s vision erases and persecutes ethnic identity and associated rights. As such it is seen by the grassroots youth movement as anti-democratic. Haacaaluu, inspiring the youth, championed a view which Abiy has turned against.

The grassroots movement has resumed because Abiy Ahmed has resorted to a politics that is deeply troubling, opening old wounds of conquest and historical trauma and indefinitely postponing elections. Further, he has jailed opposition leaders Bekele Gerba and Jawar Mohammed on false accusations of inciting violence — ironic because they have championed peaceful protests and civil disobedience since 2014. This on top of the closure of the country’s only independent Oromo news outlet, the imprisonment of journalists and the killing of protesters shows that Ethiopia’s democratic transition is in peril.

Until this renewed crackdown on opposition the movement had been remarkably peaceful. Yet as JFK said, “those who make peaceful revolution impossible make violent revolution inevitable.” The current situation where the people are subdued by brute force is not sustainable. As Africa’s second most populous nation and an important regional political broker, the root causes of Ethiopia’s current crisis must be politically addressed and resolved to achieve stability in the region.

The international community can make a great contribution by taking steps to promote a democratic process, encouraging Abiy to return to the promises made at the outset of the transition, reinstating freedoms of speech and assembly, democracy and access to opportunity. Abiy cannot presume to pursue democracy with the opposition in custody. In addition to urging the release of prominent opposition leaders, journalists and protesters, global institutions must support a genuine political dialogue with input from all parties and stakeholders, including youth, to develop a roadmap to participatory democracy by way of free and fair elections.

Even though he is gone, Haacaaluu’s call for people to come together and build an Ethiopia that reflects all of its peoples still resonates. 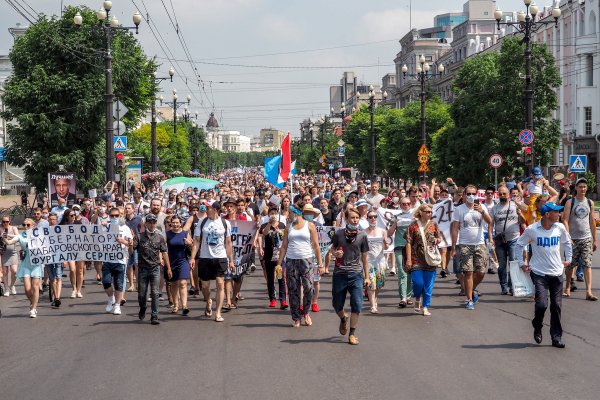 Protests Over the Arrest of Governor Sergei Furgal Show Populism Is Alive in Russia—and May Create Real Problems for Putin
Next Up: Editor's Pick