Beijing Orders the Closure of the U.S. Consulate in Chengdu as Pompeo Takes Aim at China’s ‘New Tyranny’

China on Friday ordered the U.S. consulate in the southwestern city of Chengdu to close in response to Washington’s “unjustified” order for the Chinese consulate in Houston to cease operations.

In announcing the latest tit-for-tat salvo between the world’s two biggest powers, the Chinese Foreign Ministry warned of “gravely harmed U.S.-China relations,” while adding that the “U.S. is responsible for all this.” Chengdu is the westernmost of the five U.S. consulates in mainland China, and its closure deprives the Trump administration of an invaluable outpost for gathering information on the restive regions of Tibet and Xinjiang.

On Wednesday, Washington ordered China’s Houston consulate to close within 72 hours amid accusations that it had been used to orchestrate rampant intellectual property theft. TV news broadcasts showed local firefighters called to the scene after consular staff apparently began burning documents in the wake of the closure order.

The shuttering of the Houston consulate was among many subjects broached by Secretary of State Mike Pompeo during a stinging speech Thursday evening at the Richard Nixon Presidential Library in Yorba Linda, Calif.

In a wide-ranging attack on the Chinese state, Pompeo said the Houston consulate was a “hub of spying and IP theft.” He accused China of having “ripped off our prized intellectual property and trade secrets costing millions of jobs across America.”

On Friday, Foreign Ministry spokeswoman Hua Chunying condemned Pompeo for “launching a new crusade against China in a globalized world.” She tweeted: “What he is doing is as futile as an ant trying to shake a tree.”

Prof. Wang Yiwei, director of the Institute of International Affairs at Renmin University in Beijing, says that the closure of the Houston consulate is intended to signify a permanent break in bilateral ties.

He notes that Houston was one of the first Chinese consulates in the U.S., with the city holding positive associations for Chinese as the place where Yao Ming made his name as an NBA great. The most enduring image of Deng Xiaoping’s state visit to the U.S.—the first by any Chinese paramount leader—in 1979 was of the reformist wearing a Texan cowboy hat at the Simonton Rodeo, less than 40 miles from the Houston consulate.

“So this is a symbol that the U.S. wants to escalate the confrontation with China, not just regarding the current administration, but from the very beginning of engagement with China,” Wang tells TIME.

Read More: Inside the Global Quest to Trace the Origins of COVID-19

The shift in tenor was apparent throughout Pompeo’s speech, which took aim at China’s alleged repression of its Uighur ethnic minority in the far western province of Xinjiang, the erosion of freedoms in semi-autonomous Hong Kong, Beijing’s military expansion in the disputed South China Sea and China being the place where the novel coronavirus first came to light.

“President Nixon once said he feared he had created a ‘Frankenstein’ by opening the world to the CCP (Chinese Communist Party),” Pompeo said. “And here we are.”

“The free world must triumph over this new tyranny,” he added. “The old paradigm of blind engagement with China simply won’t get it done. We must not continue it. We must not return to it.”

Meanwhile on Thursday, the U.S. Justice Department charged four Chinese researchers with visa fraud, alleging that they had lied about ties to the People’s Liberation Army. Three have been arrested and one has taken refuge in China’s consulate in San Francisco. Beijing steadfastly denies its diplomats and academics engage in state-sponsored espionage and denounced the charges as “naked political persecution.”

Scott W. Harold, an East Asia expert at RAND Corp., says that while Pompeo’s speech hit on tangible rifts with the bilateral relationship, Trump’s previous effusive praise of Xi means that “some observers regard [this] as deliberately politicizing a critical foreign policy for the benefit of the president’s reelection campaign.”

That said, “I think the president’s team, many of whom are passionate defenders of principles and human rights, believe that they have an opening to redefine the relationship, and some of them are doing that now.”

In his speech, Pompeo suggested the creation of “a new grouping of like-minded nations — a new alliance of democracies,” to counter China’s rise. Although he did not specify which nations would participate, the Trump administration has previously sought to coalesce the Asia-Pacific’s preeminent democracies — the U.S., Australia, Japan and India — into a bloc charged with maintaining a “free and open Indo-Pacific.”

The speech was a clear departure from the America First rhetoric of Trump’s inaugural campaign, indicating that Washington was now seeking to preserve and strengthen historic alliances. Earlier this month, the State Department approved the sale of $620 million of U.S. weaponry to the self-governing island of Taiwan, which Beijing regards as its sovereign territory to be reunited with the mainland by force if necessary. China announced sanctions on Lockheed Martin as a consequence.

Read more: How China Could Emerge Even Stronger After COVID-19

“Taiwan is the canary in the coal mine,” says Walter Lohman, the Asian Studies Center director of conservative think-tank the Heritage Foundation, in a briefing note. “China has intensified its security, diplomatic, and economic threats to the island over the past several years. If the U.S. is not dependable as a friend of Taiwan, few states in the region will trust Washington for their own security needs.”

It’s unclear where the next escalation will manifest. The Trump administration has already taken aim at Chinese journalists in the U.S., prompting retaliatory measures against U.S. media organizations based in China (including TIME, which was listed by the Chinese as an entity of the U.S. government after Washington declared several Chinese media organizations to be arms of Beijing). A proposal to ban all 90 million CCP members and their families from the U.S. has gathered momentum despite stern pushback from analysts and U.S. diplomats.

Remin University’s Wang sees the constant escalations as a sign of weakness. “There’s no hope for Trump to be reelected because over a hundred thousand Americans lost their lives during peacetime [from the pandemic],” he says. “This is unacceptable to American voters, so all he can do is bash China.”

Hu Xijin, editor of the CCP mouthpiece Global Times, suggested that China drew strength from Washington’s fumbling. “I strongly urge American people to reelect Trump because his team has many crazy members like Pompeo,” he posted on Twitter. “They help China strengthen solidarity and cohesion in a special way. It’s crucial to China’s rise. As a [CCP] member, I thank them.” 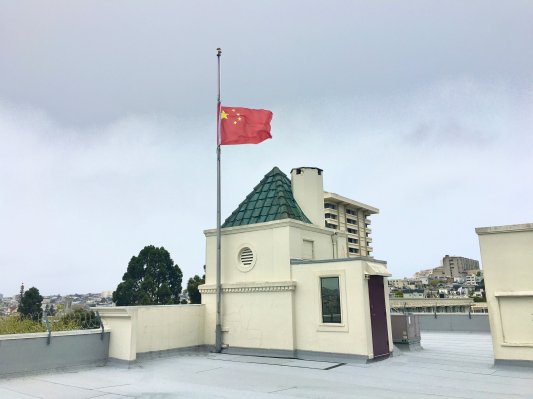 Chinese Scientist Wanted by the FBI Believed to be Hiding in San Francisco Consulate as U.S.-China Tension Continues
Next Up: Editor's Pick