Portland Mayor Ted Wheeler accused federal officers of an “egregious overreaction” and “engaging in urban warfare” after being caught in tear gas while protesting Wednesday night, according to videos posted on Twitter by The New York Times.

Wheeler can be seen wearing goggles and a mask, closing his eyes and holding his nose in a haze of tear gas, according to a video captured by Times journalist Mike Baker.

“I’m not going to lie. It stings. It’s hard to breathe and I can tell you with 100% honesty I saw nothing that provoked this response,” Wheeler said. He told Baker that federal officers were not deploying a “deescalation strategy.”

“This is flat-out urban warfare and it’s being brought on the people of this country by the president of the United States and it’s got to stop now,” Wheeler said. “This is a threat to our democracy.”

The mayor’s office did not immediately respond to a request for additional comment on last night’s protests from TIME.

The incident came after Wheeler addressed a large crowd of protesters — many of whom mocked, booed or even cursed at him throughout the night. Wheeler is also the city’s police commissioner. Portland police, in addition to federal officers, have also been criticized by protesters for their heavy-handed approach.

Wheeler reiterated his desire for federal officers to leave Portland, saying “they were not asked to be here” or “properly trained to be here.”

As the mayor spoke, some protesters projected a list of demands behind him onto a side of the Justice Center, the Washington Post reported. They included defunding the Portland Police Bureau by at least 50% to reinvest into communities and “especially the Black community,” freeing all protesters from jail, getting federal officers out of Portland and his resignation.

Protests in Portland have lasted for more than 50 days following the May 25 killing of George Floyd by police. They intensified in recent weeks as the Trump Administration sent federal officers to the city, who have been accused by many, including Oregon’s governor and attorney general, of escalating the situation and engaging in aggressive tactics. Trump has said that he intends to send federal officers to even more cities in the U.S.. 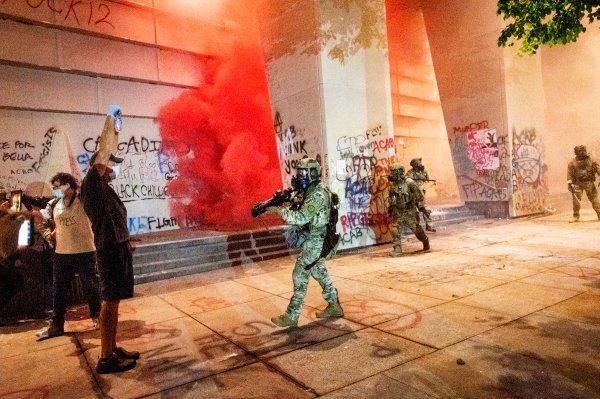 Portland Protests: What's Happened So Far
Next Up: Editor's Pick