The Uncertain Future of Places That Preserve America’s Past

Thanks to the City’s infamous witch trials, the historic homes and gardens on the Salem, Mass., waterfront usually get about a third of their annual visitors in the Halloween season. But the COVID-19 pandemic and resulting lock-downs have created a scary situation for these places: most of the rest of their visitors arrive in the spring and summer. Thanks to the pandemic, this year’s busy time has been a wash, and it’s not looking like the fall will be much different.

At the site of Salem’s The House of the Seven Gables and Nathaniel Hawthorne’s birthplace, tickets and gift-shop sales made up more than 80% of revenue in 2019. That money doesn’t just keep the home open for visitors; it also keeps an essential organ of the community running. Without it, the organization’s English-language and citizenship-prep classes as well as summer programs for kids–parts of a century-old immigrant-assistance project–are at risk. The institution is trying to work out whether it can host tours small enough to allow social distancing in the two historic homes. Otherwise, Kara McLaughlin, executive director of The House of the Seven Gables Settlement Association, says, “I don’t see us being able to open our buildings for the foreseeable future, or until there is some sort of treatment or vaccine.”

Many of her colleagues are in the same boat–and in this historic period in American life, the sites that preserve the nation’s history are in jeopardy. Based on a survey of 760 museum directors released July 22, the American Alliance of Museums says one-third of institutions are not confident that they will survive past the next 16 months, and the same portion expect to lose 40% or more of their budgeted operating income for 2020. More than half (56%) have less than six months of operating reserves. Already museums are losing at least $33 million a day.

Gone are galas. Shops and cafés sit shuttered. Donations are often earmarked for restricted use; Trudy Coxe, CEO and executive director of Rhode Island’s The Preservation Society of Newport County, says the group had to lay off 69% of its staff after it couldn’t redirect funds meant to repair a roof. Tourists have stopped touring. Ford’s Theatre in Washington, D.C., where Abraham Lincoln was assassinated, estimates it lost $4 million in revenue by being closed all spring, which includes the cherry-blossom season; since reopening, the Buffalo Bill Center of the West in Cody, Wyo., is operating with half its usual visitors, on average. Even with federal help in the form of the Paycheck Protection Program and the CARES Act, small and midsize museums often run on thin margins.

“The impact of current financial crisis as a result of the pandemic is worse than anything we have seen, certainly that I have seen in my 20-plus-year career in nonprofit finance,” says Laura Lott, president and CEO of the American Alliance of Museums.

That doesn’t mean museums are giving up. In Salem, that’s meant adding a fee to access the gardens, and institutions around the U.S. are seeking their own ways to ensure historic sites stay central to their communities for years to come.

In a moment of crisis, a small museum can easily be an afterthought. One July poll found that only a third of Americans were concerned about local museums, compared with three-fourths concerned about local restaurants and other businesses. And yet, if these sites don’t make it, the loss will run deep.

Museums exert an enormous economic impact: in an ordinary year, more people go to them than to major-league sports and theme parks combined. Annually, they contribute $50 billion to the U.S. economy, boast more than 726,000 jobs and generate $12 billion in tax revenue. Small museums are a key part of that equation. About 70% of U.S. museums and related organizations are history-focused; per the American Association for State and Local History, about a quarter of the roughly 25,000 history organizations in the U.S. operate on less than $50,000 annually.

An image of The House of the Seven Gables, a 1668 home in Salem, Mass., in the 1940s
H. Armstrong Roberts/ClassicStock/Getty Images

Less tangibly but no less importantly, these places serve as both community spaces and repositories for memory. For individuals, museums are vital for researching family and local history. More broadly, at a time of national reckoning with history, they can provide context for the moment. Some have begun collecting materials to tell the story of COVID-19, and others are key in recognizing the contributions of minority groups to American history.

“The preservation of African-American cultural assets signifies that Black people matter,” says Brent Leggs, executive director of the National Trust for Historic Preservation’s African American Cultural Heritage Action Fund, a preservation campaign on behalf of Black cultural-heritage sites. “Our nation has preserved sites associated with wealthy industrialists, plantation owners, former Presidents, but the preservation of America’s diverse history has been neglected and hasn’t received the recognition that it deserves.”

For the people who keep these museums running, being forced to stay closed during a swelling of national interest in history is frustrating–but within that irony may lie the seeds of sites’ salvation.

Some museum directors are hoping the decline in travel will reinforce the fact that the institutions aren’t just for tourists. John Krawchuk, executive director of the Historic House Trust of New York City, a network of 23 historic sites, hopes the organization will benefit from visitors taking excursions closer to home. In Rhode Island, the Preservation Society of Newport County argues that the spacious seaside mansions of Gilded Age tycoons make an ideal spot for socially distant visiting.

Meanwhile, those who work to preserve the history of America’s diversity hope that the ongoing global conversation about race will lead to support for the chronically underfunded sites and museums that tell the stories of Black America. In Philadelphia, the Paul Robeson House and Museum and The Colored Girls Museum reached a $100,000 crowdfunding goal in a week and a half via 2,500 donors, riding on momentum generated by recent Black Lives Matter protests. Leggs, the African American Cultural Heritage Action Fund’s director, says online donations to his fund are also up. To help the Paul Robeson House and Museum and other Black cultural-heritage sites provide context for the current movement, on July 16 the fund doled out $1.6 million in grants to 27 sites and organizations.

Similarly, the Museum of African American History in Boston–which received a $1 million grant from Liberty Mutual Foundation on July 15 to continue organizing virtual programming that puts the current movement in context–has been “deluged” with requests to set up virtual panels, curate reading lists and guide schools and companies on talking to employees about the history of systemic racism, says president and CEO Leon Wilson. The protests, he says, caught the museum “right in the middle of an opportunity.” Even as this moment leaves many museums facing an existential crisis, those that survive aim to make the most of it. 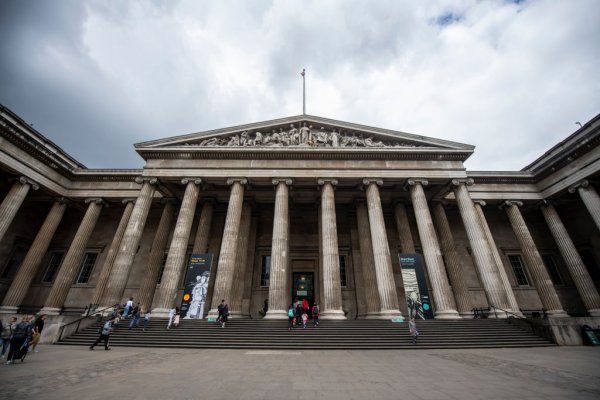 Why a Plan to Redefine the Meaning of 'Museum' Is Stirring Up Controversy
Next Up: Editor's Pick