Vivian at home in Atlanta in 2016
Kevin D. Liles—The New York Times/Redux
By Olivia B. Waxman

Cordy Tindell “C.T.” Vivian was studying history at Western Illinois University when he dropped out to make history instead. A minister, a friend of Martin Luther King Jr.’s and a key organizer in the civil rights movement of the 1960s, Vivian died on July 17 at the age of 95, the same day as longtime Georgia Congressman and fellow activist John Lewis.

In a movement in which young people like Lewis played a large role, Vivian represented an older generation that had laid many of its stepping-stones. It was the experience of growing up in Macomb, Ill., during the Great Depression that ignited his passion for economic justice. When he left college and went on to participate in a sit-in that led to the successful integration of a Peoria, Ill., eatery, it was only 1947–more than a full decade before the famous sit-in at the Woolworth’s lunch counter in Greensboro, N.C.

Vivian honed his studies of nonviolence and strengthened his connections to the movement as a seminary student in Nashville in the late 1950s. In the years that followed, his life was a study in the reality that even those dedicated to nonviolence were forced to put those strategies to use in violent situations. In 1961, at the end of the Freedom Rides to challenge segregation on interstate buses, Vivian was beaten by Mississippi prison guards. And on Feb. 16, 1965, outside a Selma courthouse, Vivian compared notorious sheriff Jim Clark to Hitler; TV cameras captured Clark punching Vivian in the face. “We’re willing to be beaten for democracy,” Vivian hollered back. Two days later, he led a peaceful march in Marion, Ala., where a state trooper beat and shot civil rights activist Jimmie Lee Jackson. (Jackson died of his injuries.) The media coverage of these assaults on Black people helped persuade Republican politicians to call for federal legislation on voting rights.

Vivian didn’t stop there. His status as a pioneer was complemented by the remarkable longevity of his activism. In 2013, President Barack Obama awarded Vivian the Presidential Medal of Freedom, the nation’s highest civilian honor, hailing him as “still in the action, pushing us closer to our founding ideals.” 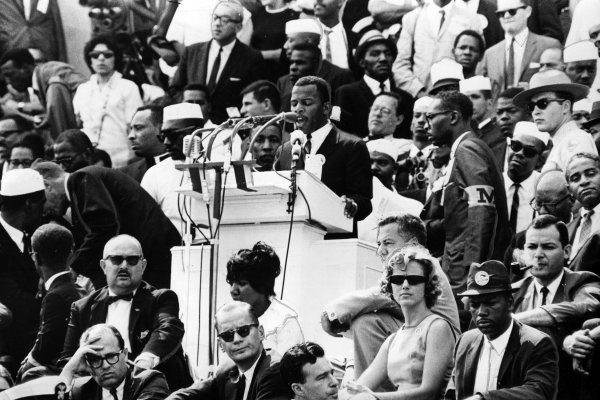 John Lewis on the Impact of His March on Washington Speech
Next Up: Editor's Pick