As violent clashes between federal agents and protestors have escalated in Portland, Oregon, in recent days, it’s become clear that a number of different federal agencies have been deployed to protect the federal buildings in the city. One of those forces is the Border Patrol Tactical Unit (BORTAC), an elite part of U.S. Customs and Border Protection based in El Paso, Texas, that is trained for SWAT-like operations and riot control.

TIME’s Brian Bennett spoke to Mark Morgan, the senior official performing the duties of the commissioner of U.S. Customs and Border Protection (CBP), about what legal authority federal agents are operating under in Portland and whether they are going to be deployed in other cities. This interview transcript has been edited and condensed.

TIME: Why are you sending CBP officers to protect federal buildings in cities?

MORGAN: Our primary role is to support the Federal Protective Service (FPS). And one of FPS’s primary missions is to protect federal buildings. In Portland, that’s exactly what they’re doing. CBP, as well as other agencies — the United States Marshals, ICE — have deployed law enforcement personnel to support and supplement FPS personnel to safeguard the federal building up there. It’s under Title-40, USC-1315 (Section 1315 of Title 40 of the United States Code). That’s where we get our statute authority and responsibility to do that.

TIME: Do you think there’s a limit to what CBP officers can do in that situation, in protecting those federal properties? Is there a limit to how far out they can go? What kind of arrests they can make?

MORGAN: There’s always limits within the law. (There are) a lot of false narratives out there. I’ll address a couple. One (is) that they were unmarked and didn’t identify themselves. That’s false. I sent out a tweet the other day that they actually on average have six different pieces of identifying markings on their body.

They have ‘Police.’ They have patches on one shoulder showing that they belong to the component they belong to — in this case it was Border Patrol. And the other shoulder it shows a patch that they actually are a member of Customs and Border Protection. So that’s just a flat-out lie when people are saying that they’re unmarked.

It’s the same individuals dressed in the same uniforms that have been there for almost four weeks out of the federal courthouse, that these same protestors and the media have seen night after night after night in the same uniforms marked the same way. And these are the exact same individuals that were out under the authority trying to identify and apprehend somebody who had just assaulted a federal agent. Everyone knew exactly who they were.

TIME: What’s the reason for using a minivan rather than a clearly marked vehicle?

One, it obviously gives us the advantage to be able to effectively go upon and identify somebody to make their arrest without notifying that we’re coming and then they’re able to run. And the second thing is just look what’s been going on throughout all the cities in the country right now. What are they doing? They’re these criminals — not the peaceful protestors, but the criminals who’ve taken over the peaceful protestors — are actually targeting our vehicles.

In New York there was an example where an incendiary device was actually thrown inside a marked police vehicle while the uniformed police officers were inside. In Portland, I think it was two nights ago, a marked Portland police vehicle was vandalized as well. So we’re trying to not draw attention and more criminal activity to the vehicle by having it marked as well.

TIME: Do you have CBP officers protecting federal facilities in other cities outside of Portland?

MORGAN: We are prepared to do that. If you go back to early July, we had that. We had individuals here in the national capital region as well as, I think, about a dozen different locations where we were actually helping state and locals. Portland right now is the only area where we’ve assisted FPS on federal property. And that’s an important distinction.

You brought up that viral video where the unmarked vehicle’s being used. The individual that they were trying to apprehend had just committed a federal crime by assaulting a federal agent. Someone is off of federal property, but uses a weapon to assault a federal agent on federal property — yes, of course we have the statutory authority to go out and arrest somebody, regardless of where they’re at, that had just committed a federal crime.

TIME: Have you ever said ‘no’ to a White House request to use CBP officers during the unrest?

MORGAN: Absolutely not. I fully 100% support the President and the White House administration with respect to the rule of law. This is a cornerstone of American society. We had credible information and intelligence that these same criminals were going to start targeting federal buildings (in Portland). And I didn’t need to be asked. I volunteered CBP resources to go up to help FPS do their job to protect the federal building.

TIME: Are CBP drones going to be used, and are they being used to assist law enforcement in the cities?

MORGAN: I’m not going to get into specific tactics that we’re using, but what I will say is that as the active commissioner I will authorize any assets that we have to carry out their mission to protect and safeguard the federal buildings, as well as protect and safeguard the law enforcement personnel that are there. I’ll authorize any assets that we have to be able to do that effectively within the law.

TIME: You had a career at the FBI. You had a senior position at the training academy. What’s your response when you see these videos of federal officers swinging batons and hitting American citizens on the street?

MORGAN: I take exception with the premise of your question. Isn’t a question we should first be asking: Why do we have criminals that are willfully organizing, planning, and coordinating each and every single night with the willful intent to destroy federal property and to injure federal agents and officers? And they’re bringing weapons, they’re bringing sledgehammers, they’re bringing frozen water bottles, they’re putting spikes and nails into plywood, they’re covering up entrances into the building and inserting commercial grade fireworks into the building with an intent to set the building on fire with law enforcement personnel inside. Isn’t that what we should be asking?

It’s unbelievable that the local mayor (in Portland) actually said that the mere presence of federal law enforcement is what’s inciting the violence. That’s outrageous. That’s absurd and it’s idiotic.

The violent activity was happening well before we deployed additional resources there. The first night that we deployed additional resources, we were actually in a defensive position inside the federal building. Which by the way, the mayor said was what we should do. And guess what? The protestors came up to the building. Graffiti wasn’t enough for them. Shouting wasn’t enough for them. They came in and they broke windows. They broke down a glass door and tried to enter the building and assault federal agents that were inside the building. Last night, again, we were inside one of the federal buildings, and what did they do? They went to the building and they absolutely were breaking down doors and trying to enter.

Why aren’t we reporting that? Because that’s the truth and those are the facts.

TIME: What will bring down the temperature?

Let’s stop the violence, and listen to have more actionable dialogue to really make the meaningful changes that we all collectively believe need to be made.

TIME: How do federal officers avoid the perception that it looks like Trump is sending a personal force to confront these groups on the street?

MORGAN: Let me ask you. What are we supposed to do? In other cities, when police walked away from their statutory responsibility, what happened? Cities burned. Precincts burned. Law enforcement precincts were taken over. Well, we’re not doing that on federal facilities.

In my opinion, that’s what this president is about, and that’s what he’s trying to do is restore law and order and restore confidence in the public that we are not going to let lawless happen.

TIME: The CBP forces specifically have been trained to be on the border — to confront drug runners and people trying to cross the border illegally. Does it sit okay with you that they’re now being used to confront American citizens in US cities that are far from the borders?

MORGAN: I again reject the premise that they’re to confront American citizens. That’s not what’s happening. I think that’s the frustrating part for me, the premise of questions to really push the false narrative. We’re not there to confront American citizens. It’s the opposite. We absolutely support every American’s citizen’s god given constitutional right to peaceful protest. We are there to protect federal property from the attacks of criminals. And we are there to make sure that we apply consequences within the law to those individuals who commit felonies by attacking federal property and or federal agents.

I will not send any resource out anywhere to confront American citizens. But I will send resources to do our statutory responsibility to protect federal property. And I will absolutely support our men and women going out and arresting individuals that are assaulting federal officers and agents. 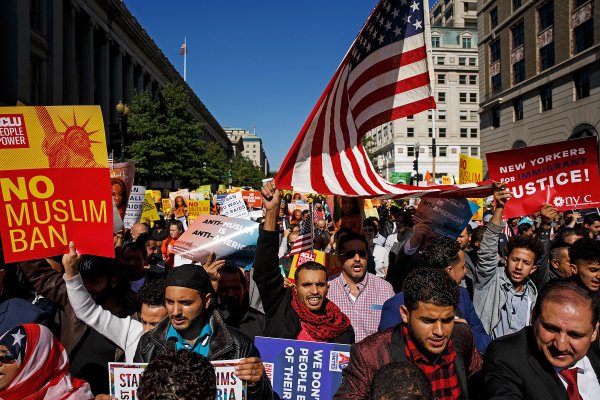 12 Ways the Trump Administration Has Deepened Inequality
Next Up: Editor's Pick