In the wake of the recent passing of John Lewis, much of the coverage of the 80-year-old Congressman’s life has been centered on his work to advance the U.S. civil rights movement and his dedication to advancing Black rights and freedom in the United States. And with good reason: Lewis emerged on the national scene during the late 1950s when he helped to organize sit-ins at segregated lunch counters in the Jim Crow South, and participated in the 1961 Freedom Rides, joining hundreds of volunteers who traveled throughout the South to challenge segregated bus terminals. He then went on to speak at the 1963 March on Washington and participated in the 1965 Selma-to-Montgomery, Ala., march.

Yet Lewis was also a vocal champion in a struggle for human rights that went far beyond the borders of the United States. As he worked to transform American society and advance Black voting rights, Lewis never lost sight of global developments. He often reminded activists that the challenges Black Americans encountered were inextricably linked to freedom struggles abroad, and a full recounting of his legacy requires seeing his work within that global context.

Lewis’ internationalist vision was significantly shaped by his earliest experiences in the movement. In 1958, Guinea had declared its independence from France, signifying a triumph in the fight to end colonialism in Africa. Following independence, Black activists traveled to Guinea to witness firsthand the building of a postcolonial socialist nation. Lewis was one of them: In 1964, he traveled to Guinea, along with ten other activists in the Student Nonviolent Coordinating Committee (SNCC). With the help of civil rights activist and entertainer Harry Belafonte, the group boarded a flight from New York City to Conakry, Guinea’s capital. They planned to be in Guinea for three weeks, with plans to meet with the nation’s first president, Sékou Touré.

During their 1964 trip, Lewis and his colleagues in SNCC met with Guinean activists and several government leaders, including President Touré and Diallo Alpha, then-Director General of the Ministry of Information and Tourism. These meetings provided a significant opportunity for Lewis and his colleagues to engage in meaningful dialogue with Guinean leaders about African liberation movements. So moved by this experience, Lewis and fellow SNCC activist Donald Harris extended their stay in Africa for another month and a half–with plans to travel across the continent. In the weeks to follow, they visited Liberia, Ghana, Ethiopia, Kenya, Egypt and Zambia. In one instance, they attended an independence celebration in Zambia–in the presence of more than 175,000 people and Kenneth Kaunda, the newly elected president of Zambia.

While in Africa, Lewis also unexpectedly crossed paths with Malcolm X at an airport in Nairobi, Kenya. Their unexpected encounter marked the beginning of a relationship between SNCC and the black nationalist leader. As SNCC began to embrace a more militant and internationalist platform, they drew heavily on Malcolm’s teachings.

Lewis’ trip across Africa and his dialogues and exchanges with African activists and leaders was transformative. He was deeply inspired by their victories and emboldened in his political work. In the years to follow, he also became more vocal about the need to link national concerns to global ones.

Likewise, Lewis was a vocal critic of the Vietnam War before SNCC as an organization officially took a position on the matter. “Beyond the fact that warfare of any kind contradicts my position of nonviolence,” he later explained in his autobiography, he took issue with this war in particular. “It seemed extremely contradictory to me for President Johnson to be sending tens of thousands of troops to fight this war in Vietnam to ‘protect the rights’ of the people of South Vietnam at the same time as the rights of black people across the nation continued to be violated without protection.” He emphasized this point in several speeches across the U.S. South in 1965, drawing parallels between Selma and Saigon (Ho Chi Minh City), Vietnam.

Following the 1968 assassination of Martin Luther King Jr., Lewis went on to pursue a career in public office, and brought his international perspective with him. In 1986 he was elected to the House of Representatives–a seat he held for 33 years. His caucus and committee memberships alone captured the breadth of his political commitments. As a Congressman, Lewis was involved in the Native American Caucus, the Caucus on Human Trafficking, and the Congressional Human Rights Caucus. He was also involved in dozens of additional committees and caucuses that worked to address the needs of people across the globe, including those in Turkey, Brazil, Pakistan, Morocco, Panama, and India.

Lewis continued to advance this work during the 1990s, when he was involved in a number of Congressional initiatives aimed at addressing the needs of marginalized groups in various parts of the globe. In October 1992, for example, he sponsored the Concurrent Resolution before the 102nd Congress on the “humanitarian crisis in Somalia.” While the decision to aid the famine-stricken African nation was a controversial one as it amplified U.S. military presence abroad, Lewis prioritized addressing the loss of human life as a result of drought, famine and civil war. Two years later, when President Bill Clinton was considering an armed invasion of Haiti, Lewis was the only member of Black Caucus to openly oppose it, expressing concern about human rights violations and Haiti’s autonomy. Years later, Lewis was arrested while protesting genocide in Sudan in 2006. Along with other congressional allies, Lewis spent his last ten years in Congress pushing for the “Gandhi-King Scholarly Exchange Initiative Act,” an effort to advance the research and study of civil and human rights.

John Lewis held on to these ideals until the very end. He left a powerful legacy of advancing not just civil rights but also human rights—extending the focus of his work beyond the United States. By linking national concerns to global ones, Lewis compelled others to see that the problems of racism and white supremacy were not contained within U.S. borders. He emphasized the need to respond globally—to forge transnational political collaborations in order to effectively build a more just and equal society. “We are one people, one family, the human family,” he once remarked, “and what affects one of us affects us all.” 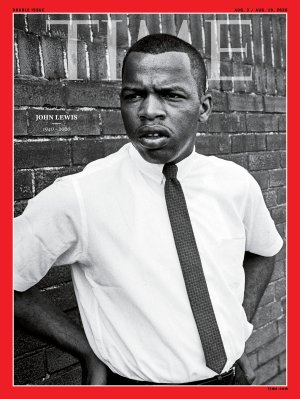 The Story Behind TIME's John Lewis Cover
Next Up: Editor's Pick