Sometimes it’s easier to be more forgiving of a big-budget movie that doesn’t quite work than of a small one that meets us only a little more than halfway. A modest picture pocked with imperfections—that putters along on a low-energy plot, or relies too heavily on a relationship between two characters that doesn’t quite gel—can be more disappointing than a hugely flawed dazzler that at least keeps us entertained for a few hours. The Sunlit Night—directed by German filmmaker David Wnendt, and adapted by Rebecca Dinerstein Knight from her novel of the same name—feels like three-quarters of a movie. It leaves you wanting some elusive soupçon of comedy or drama or romance that it just doesn’t deliver. Yet even within those parameters, there’s something appealingly human about it: It has the warmth of a tiny beach fire on a cool night, casting a soft glow that makes you want to creep closer; there’s wistfulness, at least, in its low-key quietude.

Jenny Slate stars as Frances, a painting student who has to get her life going, and fast: As the film opens, her work is torn apart by a trio of hipoisie critics—you can see the light fading from her face as their dismissive words reach her ears. Home is no haven: She still lives with her parents (Jessica Hecht and David Paymer, both wonderful in small but nicely drawn roles) and younger sister (Elise Kibler) in a haphazardly cramped one-bedroom New York apartment that’s barely big enough for two adults, let alone four. On the day she’s told that she’s lost out on an important residency in Tokyo, she also breaks up with her boyfriend, finds out that her sister is engaged and learns that her parents are splitting up. Needing to find some air, she accepts a gig as an assistant to a churlish has-been painter, Nils (Fridtjov Såheim). The assignment sends her to Lofoten, in a remote part of Norway. Her job is to help Nils paint an old barn, in his persnickety chosen shades of orange.

Nils is horrible to Frances at first, and she gives up on being nice to him—until the two of them, both slightly lost people finding themselves at a crossroads, reach a kind of jostling accord. Frances also becomes intrigued by a visitor to the town, a guarded-looking young man named Yasha (Alex Sharp), who, she notes, has the heavy-lidded expression of the lad in Caravaggio’s “Boy with a Basket of Fruit.”

What follows is only sort of a romance; the chemistry between Frances and Yasha is so tentative that it barely generates a spark. Yet there are dashes of light and humor that keep The Sunlit Night going. Everything about Frances’ teeny New York homestead is funny—or perhaps it’s only funny if you know how small most affordable New York City apartments are, at least the kind real people live in. Either way, those gags feel wholly lived in. Zach Galifianakis shows up as a Cincinnati-born transplant who takes his job as a Viking, at the local attraction Viking Village, very seriously; his conviction, enhanced by his intricately braided beard, is amusing. There are ticklish details here and there: Nils makes Frances sleep in a tiny, dismal RV, where a little goat visits her frequently and refuses to leave. Gillian Anderson drifts in to play a strange, miniature role as a cold Russian matriarch; it’s hard to know why she’s there, but she has a great moment with Galifianakis that makes a brilliant kind of dada sense.

But most of all, there’s Slate, who’s always a joy to watch. With her noble, carved-cameo profile and her distinctive voice, somewhere between throaty and fizzy, she makes you believe in Frances as a temporarily lost soul. The Sunlit Night feels somewhat incomplete, less a full-blown oil painting than a sketch skimmed over with a veil of watercolor. But Slate’s vibrance shines right through no matter what. Like the Norwegian midnight sun, she’s undimmable. 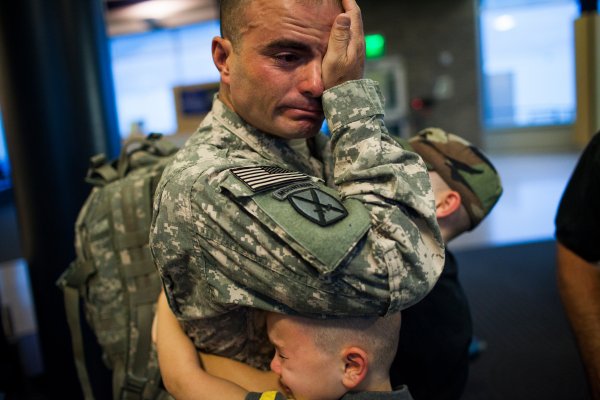 Father Soldier Son Is a Wrenching Window Into the Life of a Military Family
Next Up: Editor's Pick