Mississippi Is Replacing Its State Flag, But a Confederate Emblem Still Flies Over Georgia

Flags atop Georgia's state Capitol fly at half staff in Atlanta on Feb. 4, 2006.
Stephen Morton—Getty Images
By Rachel Lance

In late June, as many people across the United States took a renewed look at the nation’s history of racism, legislators in Mississippi voted yea on House Bill 1796, replacing the state flag. With that, theirs became the last state to remove a flying Confederate battle emblem from above their statehouse. The landslide vote, with 92 of 115 Representatives and 37 of 51 Senators opting for removal, was resoundingly heralded as a massive step forward for American equality.

However, even though the well-known design of a blue X with white stars criss-crossing a field of deep red, which featured heavily on Mississippi’s now-former state flag, often gets referred to as “the Confederate flag,” it wasn’t—and even though many people thought this was the last lingering official state symbol of the Confederacy, it isn’t.

The actual Confederate flag is almost identical to the current state flag of Georgia, and that’s not a coincidence. It was a deliberate choice, a way of forcing an emblem of the Confederacy onto the public by stealthily using a design that fewer people recognize, and it worked. A recent New York Times article on the removal of the Mississippi flag, when referencing other state flags with designs some consider to be “obliquely referencing Confederate iconography” did not call out the symbol in use by Georgia. The official Confederate flag, hiding in plain sight, still flies over an American capitol building.

When the Southern states decided to secede in 1861, their Provisional Congress established a Committee on the Flag and Seal to decide on a new flag design. The Committee leader, William Porcher Miles, was inundated with letters from citizens and leaders expressing attachment to the Stars and Stripes of the United States. They were loath to give up their favorite symbol of freedom, which was ironic given their primary goal was preservation of slavery. As a compromise, the Confederate flag-makers settled on an imitation design they called the Stars and Bars: three horizontal stripes, two red and one white, with a blue corner in the upper left containing a circle of 13 brilliant stars.

But in their efforts to make the flag similar to the American banner, the designers inadvertently did too good of a job. During the first major battle of the war, the First Battle of Bull Run, commanding officers couldn’t tell which flag was which when they hung limply on their poles. At least one Confederate regiment fired on another, and multiple officers left written records of the confusion.

Thus, the Confederate battle flag was born. Even hanging on a pole, the new banner was easy to distinguish from the Stars and Stripes, and flag-related conundrums faded from combat. The battle flag too largely disappeared in the decades after the end of the Civil War—but, like clockwork, each time Black Americans began to agitate for less systemic oppression, it popped back up again, a not-so-subtle symbol of rebellion against the fight for equality. In 1894, during the ramp-up to the formal Supreme Court legalization of segregation in 1896, Mississippi incorporated it into their state flag. When the Supreme Court ended school segregation with Brown v. Board of Education in 1954, Georgia replied with a bill adding a large battle flag emblem to their state’s banner.

Now, in the face of new protests for racial equality, one at a time the Confederate symbols have come back down. However, some stealthy racists of the past have ensured that, so far, at least one symbol has remained overlooked by the national conversation.

Georgia shrank the battle flag emblem from its dominant position on its state flag in 2001 in a move led by the Georgia House Black Caucus and supported by Democratic then-Governor Roy Barnes. However, direct backlash from conservative white voters helped lead to Barnes’ ouster from office. In 2003 the new leadership swiftly replaced the 2001 flag with a second, more clandestine, but nonetheless gigantic emblem of the Confederacy, a so-called “compromise flag.” The compromise flag, which is still Georgia’s current state flag, is literally the Stars and Bars Confederate flag, but with a small yellow insignia added in the center of the circle. At the time, members of the Georgia Black caucus supported the move as being some version of progress, although admittedly imperfect, stating that at least this symbol of the Confederacy had not been used as commonly to intimidate and terrify Black Americans during the Civil Rights era.

Now we have made even more progress, and the current reckoning should not overlook the “compromise” for which activists had to settle in the past. The Confederate government existed solely to keep Black Americans in unwilling bondage, and its primary symbol still flies over every resident of the state of Georgia. If Americans want to remove what is truly the last Confederate flag, Georgia will have to follow in the footsteps of Mississippi.

Rachel Lance is the author of In the Waves: My Quest to Solve the Mystery of a Civil War Submarine. 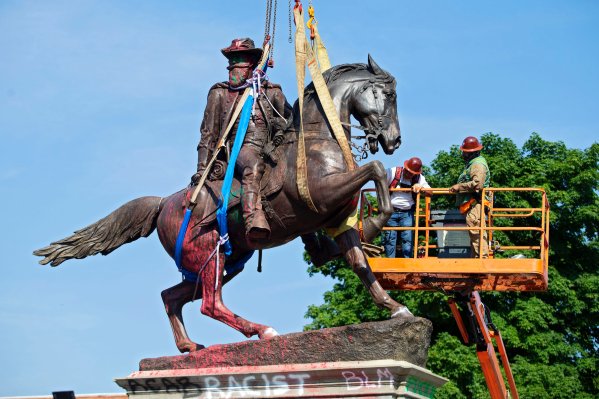 The Origins of 'Race' Are a Key Part of the History of Racism
Next Up: Editor's Pick