The Coronavirus Pandemic Has Disrupted Big Agriculture. Here's What That Means for the Planet

The Farmer John slaughterhouse in Vernon, Cali., shown here on May 26, 2020, had a coronavirus outbreak in May, when over 153 workers tested positive for COVID-19.
David McNew—Getty Images
By Emily Barone

On April 12, a meat-processing plant in Sioux Falls, S.D., owned by Smithfield Foods shut down after hundreds of employees contracted coronavirus. The closure was hardly unique. Food-processing plants are tinderboxes for infection because employees work in close proximity and often need to shout, spraying droplets that can be laced with the virus. Cargill, Tyson and other major industry players closed about two dozen poultry-, pork- and beef-processing centers over the following weeks as workers fell ill. In April and May, more than 17,000 industry workers tested positive for COVID-19 and 91 died, according to the U.S. Centers for Disease Control and Prevention.

The impact rippled to grocers, who struggled to stock certain items, and to restaurants like Wendy’s, which temporarily changed its menu at some locations to compensate for beef shortages. At the same time, farmers were forced to kill animals that couldn’t be slaughtered. The U.S. Department of Agriculture (USDA) estimates that beef and pork production in April was down 20% and 10%, respectively, compared with a year earlier.

Processing plants emit carbon dioxide, and when their operations slow down, so do emissions. But the real climate benefit from slowing the agriculture industry is reducing the methane from livestock and nitrous oxide from treating fields with fertilizers. When you add it all up, about 10% of all U.S. greenhouse-gas emissions come from the agriculture industry.

Americans too often don’t think about where the milk or ground beef in their shopping carts originated, let alone the carbon footprint of those products. That’s because the U.S. food system is so robust that shortages or price spikes—two conditions that might trigger consumers to take a closer look at the supply chain— are rare. The pandemic might be an exception, but even that, experts say, isn’t likely to have a lasting impact. “COVID-19 has slowed us down a little bit and forces us to think about some of these things,” says Teng Lim, an associate professor at the University of Missouri’s commercial- agriculture program. “But when we get back to what we do normally, we forget how things were before.”

Meat processing has already started to recover since April, and consumers are ready to buy. In June, the USDA forecast that not only will red meat and poultry production bounce back from the coronavirus dip, it’ll keep growing and hit a record 107 billion lb. in 2021.

To boost margins, farms and processors have streamlined and specialized operations in every way possible in recent decades. They use techniques that yield more for each animal, ranging from vaccinating the animals and improving their feed, to more controversial practices like breeding animals to be larger, packing them into confined spaces and slaughtering them inhumanely. For example, in 1950 there were 25 million dairy cows in the U.S. Today there are 9 million but they produce 60% more milk.

Such efficiency improves the farmer’s bottom line and lowers the emissions per glass of milk. However, farm emissions overall continue to rise, in part because today’s larger animals eat more. In the case of cattle and dairy cows, that means more belching and more cow pies, two major sources of methane gas.

“We have optimized our efficiencies,” says Frank Mitloehner, a professor in the animal-science department at the University of California, Davis. “That has benefits, but it’s also a problem. We have very few processing plants, and if one or two have a problem, it runs through the whole supply chain. It’s very painful to watch.”

With foundations like these, the system was bound to wobble when the pandemic hit. So far, it has mostly held up to the pandemic, but as the number of COVID-19 cases continues to rise in the U.S., there’s no certainty that it will do so forever. Arguably, what makes the agriculture industry vulnerable in a pandemic is also what puts it in a good position to tackle emissions. Larger farms are more suited to comply with government regulations—and the more land and livestock under their control, the greater the impact their actions have. But so far, there hasn’t been nearly enough progress.

Methane is distinctly different from other greenhouse gases. It’s about 25 times better at trapping and emitting heat than CO2. But animal-produced methane is part of a natural cycle, unlike CO2 from fossil fuels, which rides a one-way street from beneath the earth’s surface to the atmosphere. After it’s belched out of the cow, methane breaks down after about 10 years; CO2, on the other hand, sticks around for centuries.

Even so, reducing methane emissions is important to the globally agreed-to goals to keep planetary warming well below 2°C above preindustrial levels. The best way to eliminate agricultural methane emissions would be to stop farming cows. But dietary patterns change slowly, and in the interim, the U.S. farming industry is working on ways to limit methane emissions while still providing the public the meat products it expects. The industry is poised to apply science that can both improve the health of livestock and reduce their emissions, says Sara Place, chief sustainability officer at animal-health giant Elanco. For example, U.S. farms are increasingly adopting technologies that capture methane that comes off of ponds of cow poop. The method—already widely used in Canada and Europe—involves capping the ponds with a liner to trap the gas, which then gets piped to a facility called a digester system several miles away, where it is converted into biogas that can be used as fuel to run delivery trucks.

To combat emissions from the other end of the cow, feed additives like seaweed that inhibit the methane-producing enzymes in the cow’s digestive system may do the trick. Other additives have been shown in trials to change the fermentation process in the cow’s digestive tract so that the cow burps up hydrogen, a harmless gas, instead of methane. There’s also ongoing research in genetics. If cows can be bred to produce more meat or milk, it might also be possible to breed them to emit less methane. Some industry researchers and consultants, like Place and Mitloehner, are excited about these technologies. But there are plenty of critics.

“Rather than continually engineer our way out of problems with animals, there’s a simpler solution: eat more plants,” says Josh Balk, vice president of farm animal protection at the Humane Society of the U.S. Balk doesn’t think the country can rely on consumers to make such a massive dietary shift. Instead, he says, the food industry can help elevate plant-based foods, by selling them alongside animal products in grocery stores, and offering them as menu items, as White Castle, Burger King and other restaurant chains have started to do with plant-based meat alternatives.

Overall, the agriculture industry has a major stake in lowering emissions. If emissions continue to rise, plants bred and crossbred over decades to optimize the food system may not withstand rising global temperatures. Industry changes that address both emissions and the welfare of animals may also reduce the risk of the next pandemic. COVID-19 didn’t start at farms, but animals packed into confined spaces can easily spread infection. Poultry, for example, has been known to make people sick with avian flu.

There’s no one point in the food system solely responsible for making the necessary changes. At the end of the day, we all have to eat, and consumers, processors, distributors and producers alike have a role in ensuring that food is available to all—and produced in a way that is sustainable for the planet and humanity.

Most Popular on TIME
1
Meet TIME's First-Ever Kid of the Year
2
Who Should Be TIME’s Person of the Year for 2020? Vote Now
3
Portraits of Ruth Bader Ginsburg's Favorite Collars and the Stories Behind Them 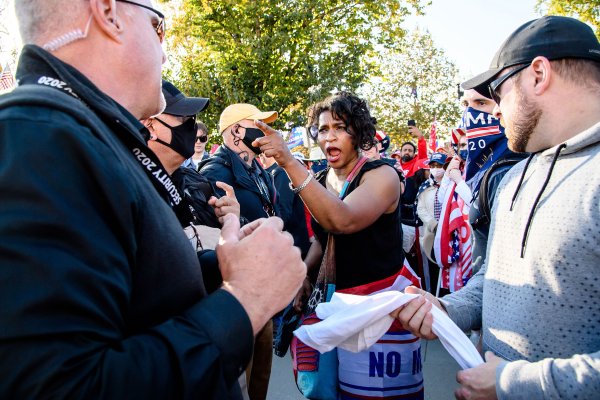