Don't Try to Change the Minds of Climate-Denying Politicians. Vote Them Out

Primary voters cast their ballots at a polling place in Louisville, Ky., on June 23
Erik Branch—The New York Times/Redux
Ideas
By Stacey Abrams
Stacey Abrams is the New York Times bestselling author of Our Time Is Now and the former Georgia House Democratic Leader. She launched Fair Fight after her 2018 gubernatorial race to ensure every American has a voice in our election system, as well as the Southern Economic Advancement Project, a public policy initiative to broaden economic power and build equity in the South.

Halfway into the year, our nation has reached a precipice: a criminal-justice system infected by racism that continues to take Black lives, avoidable deaths that keep climbing as COVID-19 sprawls, the scourge of voter suppression, and an economy that has left millions of Americans wondering how they will survive. Teetering on the edge in the midst of this tumult, a familiar peril still looms–inaction on climate change threatens the future.

I understand the impulse to divert our attention toward seemingly more immediate challenges. But extreme weather continues, natural disasters are intensifying, polar ice is still melting, sea levels are rising, and the human cost remains stubbornly high. The reckoning is felt by those who struggle to breathe as carbon-dioxide levels reach their highest point in 800,000 years and those who cannot afford their utility bills given that 19 of the 20 warmest years on record have occurred since 2001. And as with the public-health crisis, police brutality and economic collapse, communities of color will suffer the disproportionate impacts of climate change.

Our obligation to confront this catastrophe has not changed; to continue on our current trajectory without aggressive action will doom millions. But what has changed is the calculus the environmental movement ought to make. The work to make advanced energy policy a reality and to actuate climate-mitigation efforts requires engaging a diverse array of voices. The most effective climate-action coalition will center discussions about how delay will affect their neighborhoods and daily lives. Only then can we build alliances to overwhelm the system with our votes.

Climate change may be one of the greatest threats to our democracy, but the right to vote is our most powerful tool to defeat it. We can no longer simply appeal to the hearts and minds of our elected leaders. Climate actors must work to strip the skeptics of their power. Change comes when those in authority risk being swept away. It becomes permanent when we elect climate warriors up and down the ballot.

If our vote did not count, the forces trying to take it away would not be so desperate, throwing up roadblocks through voter-roll purges, racially discriminatory voter-identification laws and five-to-six-hour lines to vote. We know the power voting has on national efforts to tackle climate change. Voting brought us to the table as President Obama signed on to the Paris Agreement. Then not voting devastated our progress, as President Trump–whose election was decided by fewer than 80,000 votes across three states–abandoned the accord. In 2020, the choice is ours once again.

When we commit to stewardship of our resources on behalf of all communities, we carve out more time for future generations. Let us be ruthless in our righteousness and boundless in our boldness in the fight for climate justice. Because when we fight, we win. 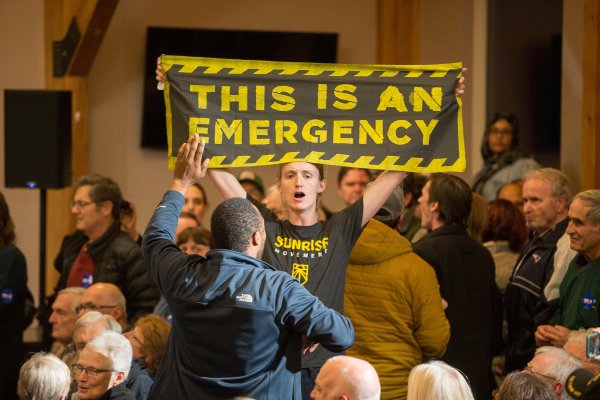 How Joe Biden Could Undo Trump's Damage to Environment
Next Up: Editor's Pick