People line up for food at Holy Trinity English Lutheran Church on June 5 in Minneapolis following the demonstrations triggered by the death of George Floyd
Kerem Yucel—AFP/Getty Images
Ideas
By Asmeret Asefaw Berhe
Berhe is a professor of soil biogeochemistry and the Falasco Chair in Earth Sciences at the University of California, Merced

As a Black scholar, I am usually one of the few dark-skinned people in scientific, educational, communication and policy spaces searching for natural solutions to climate change. Demographics of a group are a window into its culture, equity and inclusivity, so the absence of voices of marginalized communities means that the issues that concern us do not get the attention they need.

Take soils, for instance. In the context of human security, climate change is a threat multiplier, meaning it exacerbates the existing threat of food and nutritional insecurity for nearly a billion people around the world–a significant percentage of whom are Black or brown–who don’t have access to adequate food and water. The interconnected nature of the climate, soil systems and the future of global food production demands that we simultaneously address climate change and rehabilitation of degraded soils. But partly due to the lack of diversity in the climate-change community, a disproportionate focus is put on the physical impacts of increasing atmospheric temperatures on melting polar sea ice, rising sea level, thawing permafrost and the plight of polar bears. These are all important issues, but my research over the past 20 years has convinced me that soils should be a priority too.

The soil system stores four times more carbon than the atmosphere and controls the transfer of greenhouse gases between the land and the atmosphere. Excessive use and abuse of soil by human economies have caused the loss of almost 120 billion metric tons of carbon to the atmosphere in the past 200 years. But natural solutions–including reduced tillage, preventing overgrazing, reforestation and adding carbon to soil from current waste streams–exist and can draw down a third of the atmospheric carbon dioxide we need to reduce global warming. They also come with the co-benefits of improving soil health that is critical for food and nutritional security.

When people hear “Black lives matter,” they don’t often think of climate change. But the location and nature of climate change’s worst effects on human society are geographically delineated by persistent legacies of racism, slavery and colonialism. The climate-change community desperately needs to address historic inequities in access to resources and opportunities as well as socioeconomic and political factors that are the root causes of the climate crisis, and we must adopt mitigation and adaptation strategies informed by local and Indigenous knowledge. Climate change cannot be another global crisis–like malaria or the many extreme pollution episodes–that is propagated by and solved for fair-skinned folk in the northern hemisphere while communities of color globally continue to suffer as a result of unjust practices and policies that continue to silence our voices. 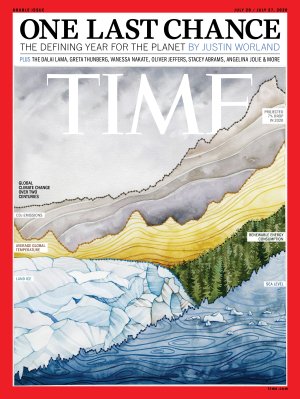 The Story Behind TIME's 'One Last Chance' Cover
Next Up: Editor's Pick