My Husband and I Knew the Dangers of the Coronavirus. How Could We Still Put Our Neighbor at Risk?

Illustration by Joey Guidone for TIME
Ideas
By Belinda Luscombe
Luscombe is an editor-at-large at TIME and the author of Marriageology: The Art and Science of Staying Together.

A few days before our longtime next-door neighbor moved out of his New York City loft in late March, he texted us and asked if we would look after his fish and some plants, since he could not move into his new place for a while. “Sure,” we texted back. “It’s not like we’re going anywhere.” Our history of looking after things is spotty, but he needed a hand, and I thought it might be time to skill up.

His home and ours have only ever been separated by a semipermeable membrane anyway. We share a common outdoor space. We have each other’s spare keys, use each other’s appliances, have permission to just go in and borrow anything when the other is away. When we had young kids in the home, we hosted big pancake breakfasts. As they got older, we would let each other know when we could smell them smoking pot. We had a standing invitation to his dinner parties.

So he brought over his fish and plants and borrowed our ladder. He was masked, because of the movers. We were not, because we were just lolling about; it was pure luck that we were even dressed. It was a quick handover. We didn’t touch. Two days later, we came down with COVID-19 symptoms. It was bad, especially for my spouse. Two weeks later, our neighbor texted to say he thought he had it too.

He has a baby, a wife and an elderly mother who was living nearby. When I read on her social-media page a week or so later that he was in the hospital with pneumonia, my stomach began to churn. We were not sure we were the ones who gave it to him–neither was he, for the record–but the possibility was horrifying. The self-recriminations were legion and grim: Why were we not more careful? How is it that we–who were fully aware of the dangers of the virus, the measures one was supposed to take to keep it in check and his family situation–still acted in a way that meant he could get infected? What if he died?

Having had the virus, I knew that people who check in too often can be a burden, but I occasionally texted his wife, warily monitored his mother’s updates for any change in tone and sent him tips on things we did that helped. While he was in the hospital, I texted photos of the flourishing plants on his side of the deck to cheer him up. My husband did some moving-house-type favors. I changed the aquarium water, a lot. We were determined to prove we were responsible human beings. Even so, a couple of times a day, I’d have a sudden spike of anxiety and guilt as I remembered his situation.

It’s very hard to imagine being contagious when you don’t feel sick, especially in familiar situations, like when you’re in your own home or with good friends. This is this virus’s most deadly aspect; it is spreading before its carriers even know they have it. It’s the termite of diseases; by the time you put your foot through the floorboard, it’s too late.

That is difficult to get used to. Mistakes will be made. We should have put on masks. We should have wiped down our ladder. We should have declined the fish. Discarded aquariums and plants are a run-of-the-mill moving story; the demise of a prominent sociologist because of his neighbors’ carelessness is a tragedy. Acts that normally feel like the right thing to do–a favor for a friend, the celebration of a birthday or a wedding– can turn out to be very wrong.

So as I watch people emerging from their isolation and gravitating toward one another at parties and beaches, I want to hire a plane to fly with a banner saying, If you like those people, stand back a bit. Nobody is going out of their way to infect others, but the damned thing about this virus is that people have to go out of their way not to infect others. As communal beings we are drawn to each other, and as communal beings, we need to avoid each other for that very same other’s sake.

But I also want to fly a banner over the homes of those who are staying in and judging those who slip up. This one would say, Humans: still only human. Part of looking out for each other is understanding that well-intentioned people make mistakes and those mistakes are not more idiotic, often, than yours. This much we know about the virus: it’s serious, contagious and, in more than 132,000 cases so far in America, fatal. That’s dangerous enough without its tearing communities apart too. My neighbor survived; the fish didn’t. (Too many water changes.) We’re still friends. 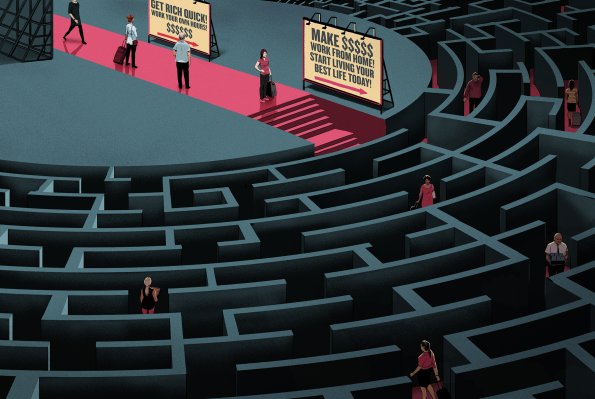 Pandemic Schemes: How Multilevel Marketing Distributors Are Using the Internet—and the Coronavirus—to Grow Their Businesses
Next Up: Editor's Pick