You don’t need to believe in astrology to fall for Walter Mercado, the flamboyant, emotionally extravagant television personality who beamed his vibes of love and positivity into millions of Latinx and Hispanic homes in the 1970s and 1980s before finding even greater international fame in the following decade. Once you’ve seen Mercado, you don’t forget him: Nearly always decked out in a lavishly decorated cape, and usually wearing three or four necklaces and twice as many rings, he mingled Vegas-style showmanship with mysticism and kindness. The advice he doled out for each astrological sign focused on positive traits, and he urged his viewers to make the most of each day. He would sign off with an expansive benediction that seemed designed to make everyone feel better about everything: “Mucho, mucho amor!”

Documentary filmmakers Cristina Costantini and Kareem Tabsch borrow that sign-off for the title of their delightful and open-hearted documentary Mucho Mucho Amor: The Legend of Walter Mercado, streaming on Netflix. People who didn’t come up in Spanish-speaking households may not have known Mercado’s name. As Mucho Mucho Amor suggests, that’s their loss. Lin-Manuel Miranda, who grew up watching Mercado with members of his family, recalls having to be quiet as Mercado wound his way toward the relevant sun signs. He remembers thinking “how dramatic he was, and how fabulous he was,” adding, “I can’t think of an English-language astrologer who would command the attention of millions of households.”

Mercado, for a time, seemed to be on top of the world, or at least on top of his world. Mucho Mucho Amor starts at the beginning, with Mercado’s childhood in Ponce, Puerto Rico: After breathing life into a seemingly dead bird, he was treated by people in his village as a kind of seer and mystical healer. (This period in Mercado’s life is dramatized by a fanciful animated sequence by Alexa Lim Haas, whose work is also featured in the faux-Tarot title cards that introduce each sequence of the film.) From there Mercado became a dancer and an actor in telenovelas. And almost by accident, while taping a spot for a TV show, he became the cape-clad astrologer who captivated audiences with his exuberance and his soothing words. His popularity grew, mushrooming to even greater heights after he met an impresario named Bill Bakula (who’s interviewed in the film, outlining his role in Mercado’s career with almost shocking candor).

And then, mysteriously, this effervescent showman who sought wisdom in the stars disappeared. Costantini and Tabsch located Mercado at his home in Puerto Rico and conducted a series of interviews that trace his dramatic rise and his precipitous fall. Mercado died in November 2019, at age 87, but just before that, he was the subject of a celebratory exhibition at the HistoryMiami Museum, an honor that appears to have brought him great joy. Mucho Mucho Amor combines vintage clips with more recent footage of Mercado in his later years: Dressed in a luxe satin robe, he sits down to a breakfast prepared for him by his loyal assistant Willie. Though he eats the healthy part of the meal, he refuses the cookies Willie has arranged on a plate to entice him (though he does feed a few crumbs to his dog, Rumo, when Willie isn’t looking). When asked by an off-camera interviewer if he’s had any plastic surgery, he admits coquettishly to a “little arrangement.” (With his peach-blond coif, elegant bearing and mischievous sphinx smile, he somewhat resembles the fashion designer Carolina Herrera.) And when he’s asked why he has always refused to talk about his personal life and his sexuality, he responds as if offering a bouquet of live butterflies to the world: “I have sexuality with the wind, with the flowers in the garden, with all the beautiful display of nature! I have sex with life! I have sex with everything! With the clothes, with beauty!”

Perhaps that’s just part of why Mercado is treasured, as the film notes, by a new, younger audience. He’s an exuberant, generous, nonbinary presence, a human who seeks not to judge but to appreciate beauty in all forms, and who’s not afraid to have a laugh at his own expense. The clips from Mercado’s shows in the 1980s and 1990s are by themselves a salve for the distressing times we’re living through: He swirls through them in his grand outfits, jewel-encrusted ensembles in peacock greens and blues, brilliant magentas and neon oranges. He is his own extravagant creation, a vessel of the beauty of nature, and of life, enhanced by just a “little arrangement.” Mercado the human shell is gone, but his spirit lives on, expansively. In Mercado’s universe, there’s no such thing as just a little amor. 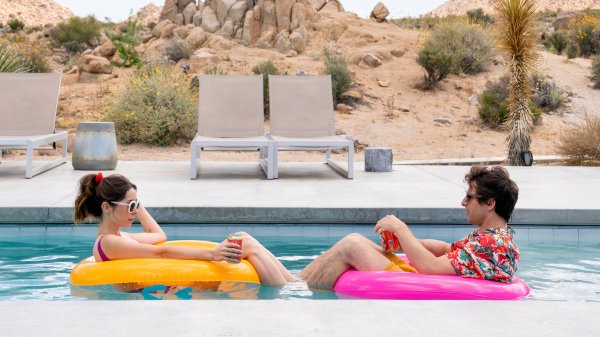 Palm Springs Is a Buoyant Comedy Made Great by a Hint of Melancholy
Next Up: Editor's Pick