The best comedies often come with a whisper of melancholy, an acknowledgment that so much in life is a leap of faith. Palm Springs, directed by Max Barbakow and out on Hulu July 10, starts off, seemingly, as one of those unruly and unhinged escapades in which characters do anything they want just to show how groovy and iconoclastic they are: Andy Samberg, channeling the perfect mix of goofiness and gravitas, plays Nyles, the type of guy who wears a Hawaiian shirt and shorts to a formal wedding, as if the rules set by the Man don’t apply to him. He embarrasses his girlfriend, bridesmaid Misty (Meredith Hagner). And he flirts shamelessly with the maid of honor, Sarah (Cristin Milioti, in a performance that’s at once serrated and tender), a dark-eyed beauty who’s clearly perched on the edge—she keeps refilling her wineglass, even if drinking only escalates her jittery unhappiness.

When Nyles tries to get Sarah to talk to him, she pushes him away with the tiny-pitchfork animosity of a cartoon devil. But he wears her down, and the two sneak off; everything seems to be going great. But Nyles is stuck in an infinite time loop, which means he’ll repeat the same day over and over. In some ways, it’s fun—he can rework that one day however he wants. But there’s also despair in knowing that he can never move forward, and that becomes Sarah’s burden too, when she becomes stuck in the time loop with him.

The rest of Palm Springs shows how Sarah and Nyles try to break out of that loop and find their way to each other. If you detect a metaphor—you’re right. Yet the movie is so light on its feet that it never feels forced or didactic, even when it asks us to confront piercing truths about love and the elusive meaning of happiness. “What if we get sick of each other?” Sarah asks Nyles plaintively, in the face of a leap she’s not prepared to make. “We’re already sick of each other,” he says, in the voice of a man who’s already a goner. “It’s the best.” That’s the story of, and the messy glory of, love. 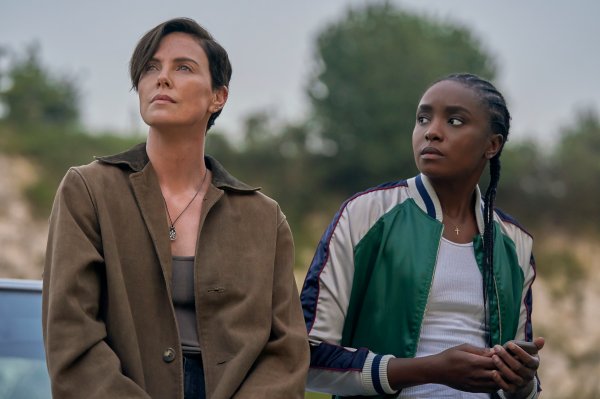 The Old Guard May Be the Best Action Movie of the Summer
Next Up: Editor's Pick