The decision taken by the governments of New South Wales and Victoria marks a dramatic escalation of efforts to contain the virus and could jeopardize the nation’s economic recovery as restrictions are eased elsewhere. Victoria, which has locked down 12 areas of the state capital Melbourne, recorded 127 cases overnight, its biggest daily increase.

“What is occurring in Victoria has not yet occurred anywhere else in Australia,” New South Wales Premier Gladys Berejiklian said, stressing that most of the infections there were coming from community transmission rather than returned overseas travelers. “It is a new part of the pandemic and, as such, it requires a new type of response.”

While Australia has been one of the standout performers globally in limiting the spread of the virus to less than 9,000 cases, Victoria’s flare-up — mainly amid Melbourne’s poorer and more multicultural suburbs — shows just how hard it will be to eradicate without a vaccine.

Victoria has ordered residents across 12 areas of Melbourne to stay at home, other than for work, exercise, medical appointments or essential shopping. At the weekend, authorities took the toughest control measures in Australia to date, with 3,000 residents of nine public-housing towers in the city placed under hard lockdown and barred from leaving their apartments. Authorities are racing to test everyone in the towers and provide them with food and other essential items.

Acting Chief Medical Officer Paul Kelly said the measures were necessary to avoid a spread of the virus among people, many with underlying health problems, living in cramped conditions. There were 53 cases of the virus in the towers as of Monday, up 16 overnight. The death of a man in his 90s took the national tally to 105.

“There are people living in large concentrations,” Kelly said. “These are vertical cruise ships, we need to take particular notice and pay particular attention to make sure the spread is minimized.” The level of community transmission in Melbourne was new for Australia, he said.

Victoria has experienced more than two weeks of double-digit daily increases in new Covid-19 cases after social distancing restrictions were eased, jeopardizing its economic recovery and prompting other states to delay plans to open their borders.

Deloitte Access Economics warned in a report Monday that Victoria is likely to experience the largest downturn in Australia “given its current spike in cases, as well as that state’s dependence on migration and on foreign students in an age of lockdowns and closed borders.”

Authorities are probing alleged security lapses at Melbourne hotels used to quarantine overseas arrivals, including claims guards slept with guests, amid concerns the breaches have contributed to the spike in infections. Unlike most states and territories which enlisted their police forces to regulate the quarantine, Victoria contracted out the task to security firms.

The nation’s other states and territories, most of which haven’t recorded community transmissions for weeks have kept their borders closed to Victoria even as they open to others.

The decision to close the border was reached after a three-way phone hook up with Berejiklian and Prime Minister Scott Morrison, Victoria Premier Daniel Andrews said. There will be a permit system so that people living in border communities can continue to cross between the states for work and other essential services.

“We agree that this is the best thing to do at this time out of a sense of caution,” he said. “Noone enjoys doing it but it is, I think, the right step to take at this point.” 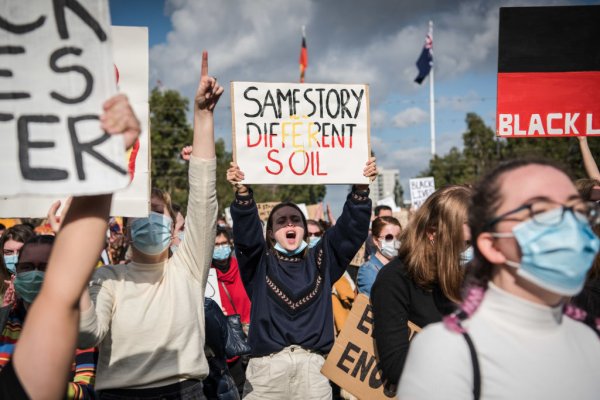