A white couple was charged with felonious assault on Thursday after viral videos showed a woman pointing a gun on a Black woman in the parking lot of a Michigan Chipotle.

In the widely-circulated videos taken earlier this week, a Black woman, 34, and her 15 and 13-year-old daughters confront a white woman, who police identified as Jillian Deanne Wuestenberg, 32, outside of the restaurant in Orion Township, Mich. The Black family demands that Wuestenberg apologize for bumping into the 15-year-old girl, exchanging accusations of racism with Wuestenberg and her husband, 42-year-old Eric Peter Wuestenberg. As the couple tries to pull away from the restaurant, the woman stands behind their vehicle and slams it with her hand. Wuestenberg then rushes out of the car and points a gun at the woman.

Police said that in the immediate aftermath of the incident, it wasn’t clear which group had been the aggressor, and whether the couple had been acting in self defense.

“The male and female involved claimed to fear for their lives over threatening comments made to them and their vehicle being struck with a hand by the other party. The other parties said the couple threatened them with firearms,” the Sheriff’s office said.

The Wuestenbergs, who live in Clarkston, Mich., were later arrested and charged with assault with a dangerous weapon. Both had been armed with firearms during the incident, the Oakland County Sheriff’s office said in a release. If convicted, they each face up to four years in prison and up to $2,000 in fines.

The couple, who had concealed carry permits, also surrendered their weapons to the police. After the incident, the Wuestenbergs drove away from the scene and waited for police, according to the Sheriff’s office. 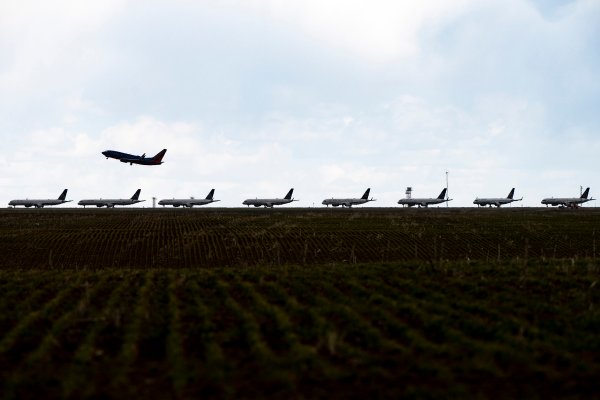 Some COVID-19 Restrictions Are Being Lifted. But Is It Safe to Travel?
Next Up: Editor's Pick