What Happens Next With the U.K., Brexit and Coronavirus

Prime Minister, Boris Johnson joins in the pause for applause to salute the NHS in London on July 5, 2020.
Press Association via AP
Ideas
By Ian Bremmer
Bremmer is a foreign affairs columnist and editor-at-large at TIME. He is the president of Eurasia Group, a political-risk consultancy, and GZERO Media, a company dedicated to providing intelligent and engaging coverage of international affairs. He teaches applied geopolitics at Columbia University’s School of International and Public Affairs and his most recent book is The Power of Crisis

It’s hard managing the greatest health crisis of the last century on the fly; it’s even harder when that health crisis is accompanied by a global economic depression. Some countries have seemingly pulled it off. The United Kingdom isn’t one of them. And we haven’t even gotten through Brexit yet.

Prime Minister Boris Johnson is currently responsible for leading his country through three separate, though interrelated, once-in-a-lifetime crises of health, economics, and politics… The initial returns have been far from promising.

With over 44,000 deaths, the U.K. remains the worst hit among European nations on an absolute number basis, and currently registers the third highest death rate in the world; in fact, if present trajectories hold, the U.K. will soon join the U.S. as the only two developed markets in the global top 10 of coronavirus cases. There are no shortage of missteps to blame for that, from delaying lockdown measures in the misplaced hope that the U.K. would be able to bypass draconian measures and just zoom towards herd immunity, to continuous “mixed messaging” from the country’s political leadership about what was expected of Britons to keep the virus in check, to the prime minister’s principal advisor visibly flouting social distancing measures his government was requiring of its citizens and still keeping his job. That last bit cost Johnson a great deal of popularity. Not even a third of Britons support their government’s handling of the crisis. Based on the U.K.’s performance to date, you wonder how the approval rating is even that high.

The British economy has also taken a massive hit, with a 20.4 percent contraction in April (a figure only just released in June). Yes, the IMF expects a global contraction of 4.9 percent this year, but even then, the UK is underperforming—the OECD expects the UK to sustain the most economic damage of all developed markets this year with an economic contraction of 11.5 percent. That said, if there’s a bright spot for the U.K., it’s in its monetary policy response coming out of the Bank of England, which was quick and robust—one shudders to think how much worse the economic situation would have been otherwise.

Plenty of political observers were worried that Boris would use the mayhem and economic chaos caused by the pandemic as a cover to crash-out of the EU, thereby appeasing the more hardline elements of his base who prioritize independence from Brussels above all else, economic hits be damned. While that is indeed still a worry, the Johnson government’s mishandling of the pandemic has actually made that less likely, as 10 Downing Street is now actively concerned with its own sinking credibility, credibility that has undeniably been tarnished in these last few months by things both within and without its control.

Also factoring into Downing Street’s calculations is the potential resurgence of the Labour party under its new leader, Sir Keir Starmer. Starmer took control of the center-left party following Jeremy Corbyn’s disastrous leadership reign, under whom the party championed a muddled Brexit message that netted them some of the worst election results of its modern history (not to mention persistent accusations of anti-Semitism). Starmer has been trying to fix Labour from within, and hasn’t really made hay of the Brexit issue, possibly out of fear for reminding voters of his prominent position in the Remain campaign. But what he has done is absolutely excoriate Johnson over the country’s pandemic response during Prime Minister Questions, a regular parliament session where the Prime Minister has to respond to questions from the opposition in a public setting. Starmer, as head of the opposition and a lawyer and prosecutor by profession, systematically dresses down Johnson each week for the government’s missteps, which would be much more entertaining if the subject matter wasn’t so tragic. Nevertheless, the performances have resulted in him recently surpassing Johnson for the first time as the person most Britons would like to see as their prime minister. Again, Starmer has avoided wading into the Brexit issue, but the prospect of a crash-out, no-deal Brexit is likely to bring him back into the mix, possibly alongside the Scottish National Party (SNP) and centrist Lib-Dems, to demand another extension. Combined with the growing cries of pro-business groups against a no-deal Brexit during an unprecedented economic contraction, Johnson now has the most incentive during any point during his premiership to seek a deal with the E.U. While Johnson’s personal ratings have taken a beating, his Tories are still ahead in the polls, and they’d like to keep it that way, even if plenty of negotiation hurdles with Brussels still loom.

In the meanwhile, Johnson plans to use the next few months to launch extensive infrastructure projects, which he himself has likened to FDR’s “New Deal” slate of projects. While that may buy him some good political will on the margins, it’s the government’s pandemic response—or lack thereof—that will drive the Johnson government’s political fortunes these next few months… and with it, the prospects of a U.K.-E.U. trade deal. 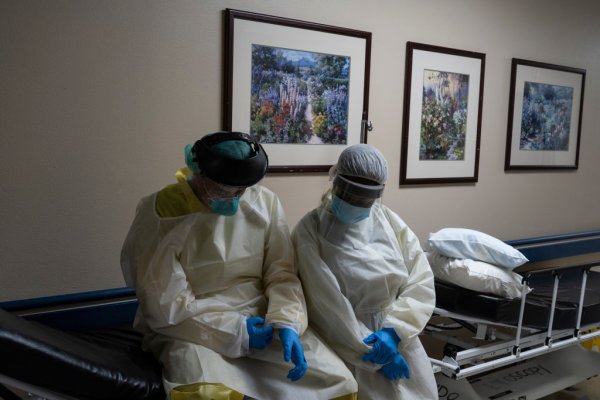