Men gather outside the charred remains of The Daily Record after the 1898 race riots in Wilmington, North Carolina.
Library of Congress
Ideas
By David Zucchino
Zucchino is the author of Wilmington's Lie: The Murderous Coup of 1898 and the Rise of White Supremacy. He is also a contributing writer for The New York Times. He has covered wars and civil conflicts in more than two dozen countries.

The all-white force immediately set upon newly freed Black people. Men, women and children were beaten, clubbed and whipped indiscriminately. A Union officer with the Freedmen’s Bureau maintained a ledger of daily police assaults: A Black man whipped 72 times. A Black woman dragged for two miles with a rope around her neck. A Black man, “his back all raw,” beaten by police with a buggy trace.

“The policemen are the hardest and most brutal looking and acting set of civil or municipal officers I ever saw. All look bad and vicious,” the Union officer reported.

Today, the image of a white police officer in Minneapolis pressing his knee against George Floyd’s neck as he pleaded for mercy has opened a window on America’s unbroken history of brutality against African-Americans by white men in uniform.

One of the most terrifying examples erupted more than a century ago, when white supremacist soldiers and police helped hunt down and kill at least 60 Black men in Wilmington in 1898. The murders were part of a carefully orchestrated coup that toppled a multi-racial government in the South’s most progressive Black-majority city.

Like many police assaults against Black people in American history, the goal was more than just punishment and humiliation. It was to prevent black citizens from exercising their constitutional rights. Today, as American celebrates Independence Day it is an opportune moment to reflect on America’s troubled racial history and how to move forward.

The 1898 coup capped a months-long White Supremacy Campaign in North Carolina designed to strip black men of the vote and remove them from public office forever. The prime target was Wilmington, where black men served as councilmen, magistrates and police officers in a city with a thriving black middle class and some 65 black doctors, lawyers and educators.

(Today in North Carolina, conservatives in the state legislature have continued to try to squash the Black vote through voter suppression laws and racial gerrymandering schemes that have been stuck down by federal courts as unconstitutional.)

The 1898 coup, plotted by white politicians and businessmen, would not have been possible without the city’s white soldiers and police, who led white vigilantes on a killing spree on Nov. 10, 1898. This came after white supremacists had bullied the white police chief into firing the city’s 10 black policemen.

Like politicians in the aftermath of George Floyd’s killing, the coup leaders pressured the governor to call out the militias – the National Guard of the day – on the pretext that blacks were rioting. In fact, it was whites who were rioting, led by soldiers and police. They burned a Black owned newspaper and shot Black men down in the streets, many of them simply trying to get home safely.

The militiamen had served in the Spanish-American War in the summer of 1898 and had not yet been mustered out of federal service. That meant U.S. soldiers were unleashed against law-abiding Black citizens of Wilmington – 122 years before President Trump threatened to deploy the U.S. military against street protesters.

Like the white vigilantes who were indicted for shooting Ahmaud Arbery in Georgia after accusing him of burglary, white vigilantes in Wilmington in 1898 shot Black men accused during the White Supremacy Campaign of raping white women and stealing white jobs.

As part of the coup, white supremacists banished leading Black and white political allies from Wilmington after forcibly evicting them from office and replacing them with coup leaders. Militiamen escorted them to the train station at gunpoint. In the weeks after the coup, more than 2,100 African-Americans fled Wilmington, turning a black-majority city into a white supremacist citadel.

It was the most successful and lasting coup in American history. It instituted white supremacy as official state policy for half a century and prevented Black citizens from voting in significant numbers until passage of the Voting Rights Act in 1965. Two years before the coup, 126,000 black men registered to vote in North Carolina. Four years after the coup, the number was 6,100.

After the coup, no Black citizen served in public office in Wilmington until 1972. No Black citizen from North Carolina was elected to Congress until 1992. No one was prosecuted or punished for the killings and violence. President William McKinley ignored pleas from Black leaders to send in federal marshals or U.S. troops to protect Black citizens.

The coup was the natural outgrowth of North Carolina’s – and America’s – long history of relying on white police to perpetuate white supremacy amid fears of Black uprisings.

Scores of innocent slaves were lynched after being seized by white police and vigilantes in North Carolina towns. In Wilmington, four slaves accused of plotting a “diabolical” uprising were rounded up by police and decapitated by a white mob. Their severed heads were mounted on poles along a public highway known as “Niggerhead Road,” a name that endured until the 1950s.

More than 60 years after Nat Turner’s execution, his slave revolt was cited by some white supremacists in Wilmington as justification for the militia and police violence required to put down a purported black riot in 1898.

After the coup, the city’s fired Black policemen were replaced by white supremacists, most of whom had participated in the coup and murders. White police enforced new city policies that replaced Black workers with whites. Police often used brute force to ensure that newly passed Jim Crow laws were obeyed by Black citizens.

During the 1898 campaign, white police stood by as nightriders burst into black homes in and around Wilmington, whipping Black men and threatening to kill them if they dared register to vote. On Election Day in November 1898, vigilantes beat Black voters and stuffed ballot boxes in full view of white policemen.

Just a week ago in June 2020, three Wilmington police officers were fired after a recording emerged in which they used racial slurs as one officer vowed to “go out and start slaughtering” black people and “wipe ‘em off the f—-ing map.”

A Democratic Party Hand Book, published in the summer of 1898 by what was then the party of white supremacy, laid bare the lasting intentions of the men who plotted Wilmington’s white coup: “This is a white man’s country and white men must control and govern it.” 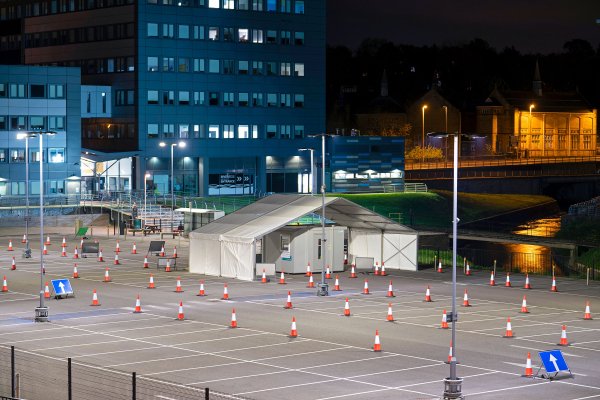 How the U.S. and U.K. Failed Their Coronavirus Responses
Next Up: Editor's Pick