The Trump administration made it harder to export sensitive American technology to Hong Kong, escalating pressure on China as lawmakers in Beijing prepared to hand down a national security law that limits the former British colony’s autonomy.

The U.S. Commerce Secretary Wilbur Ross said in a statement Monday that the security legislation, which China’s top legislative body approved Tuesday, raised concerns about the transfer of key technology. The Commerce Department said it was suspending regulations allowing special treatment to Hong Kong over things including export license exceptions.

“With the Chinese Communist Party’s imposition of new security measures on Hong Kong, the risk that sensitive U.S. technology will be diverted to the People’s Liberation Army or Ministry of State Security has increased, all while undermining the territory’s autonomy,” Ross said, providing little detail on specific impacts. “Further actions to eliminate differential treatment are also being evaluated.”

Exports of sensitive technologies to Hong Kong have previously been treated differently from those to mainland China, where exporters have to apply for special licenses. Those policies were put in place after China agreed to preserve Hong Kong’s “high degree of autonomy” — including civil liberties, free markets and independent courts — for at least 50 years after resuming sovereignty over the city in 1997.

President Donald Trump said after the National People’s Congress first approved the drafting of the security legislation last month that the U.S. would begin the process of eliminating policy exemptions for Hong Kong, including export controls on dual-use technologies. Monday’s announcement likely sets up a tedious application process for companies.

Hong Kong Chief Executive Carrie Lam dismissed U.S. concerns that such sensitive items could make it to the mainland, saying the city had “a stringent trade-control mechanism.” She told reporters at a weekly news briefing that the move would have “minimal” impact.

“Sanctions will not scare us,” Lam said. “We are fully prepared and I believe China will also take countermeasures when needed.”

Hong Kong stocks were little affected by either the trade actions or China’s passage of the national security law, with traders waiting for details about the content of the legislation. The benchmark Hang Seng index rose as much as 1.2% before paring gains.

The U.S. move was the latest as relations with China continue to deteriorate over Hong Kong and other fronts. The president has attempted to blame the country for the spread of the coronavirus, part of his re-election effort against presumptive Democratic nominee Joe Biden, who has also escalated his criticism of China. Both nations’ warships and combat jets continue to track each other around the contested South China Sea and the Taiwan Strait.

“There’s no immediate ability to predict a specific negative impact on businesses,” Anna Ashton, a senior director of government affairs at the U.S-China Business Council, told Bloomberg Television. “We’re in the midst of a strategic rethink about the relationship between the U.S. and China. And it’s very difficult to know right in this moment exactly what that means for the business side of the relationship.”

Last week, U.S. Secretary of State Michael Pompeo announced visa restrictions against unspecified Chinese officials involved in the Hong Kong actions, drawing a threat of retaliation from Beijing. Pompeo said on Monday that the U.S. would also cease selling defense equipment to Hong Kong, a largely symbolic act that will mostly affect sales with the city’s police and corrections forces.

Trump delivered remarks last Friday that, while harsh, did not threaten specific punishments for the Beijing government.

While the threat of the U.S. ending Hong Kong’s special trading status loomed over a historic wave of unrest that rocked the city for much of last year, it appears to have done little to change President Xi Jinping’s policy toward the city. Beijing has shown an increasing willingness to push back against foreign pressure, as its critics in Hong Kong grow more radical and mainland citizens demand steps to protect the country’s territory from outside influence.

“Separatist forces intending to disrupt Hong Kong can clamor as they like and anti-China external forces may try to exert pressure, but neither will stop China’s resolute action to advance the legislation,” Chinese Ministry of Foreign Affairs spokesman Zhao Lijian told a regular news briefing Monday in Beijing. “We urge the U.S. side to grasp the situation and immediately stop meddling in Hong Kong affairs and China’s internal affairs in any way.”

Hong Kong matters far less to China’s fortunes than it once did, with 12% of the country’s exports going to or through Hong Kong last year, compared with 45% in 1992. Still, the end of Hong Kong’s preferential treatment — which helps makes it an important base for international banks and trading firms — could deal yet another blow to the local economy, which has already been reeling from months of protests followed by the coronavirus outbreak.

U.S. interests could get damaged in the dispute, though. The U.S.’s largest trade surplus in 2018 was with Hong Kong — $31.1 billion. Some 290 U.S. companies had regional headquarters in the city that year and another 434 had regional offices.

“This won’t affect trade much,” said Iris Pang, chief economist for greater China at ING Bank NV. “Re-export is the main function of the ports. That will continue unless the U.S. decides not to export to mainland China.” 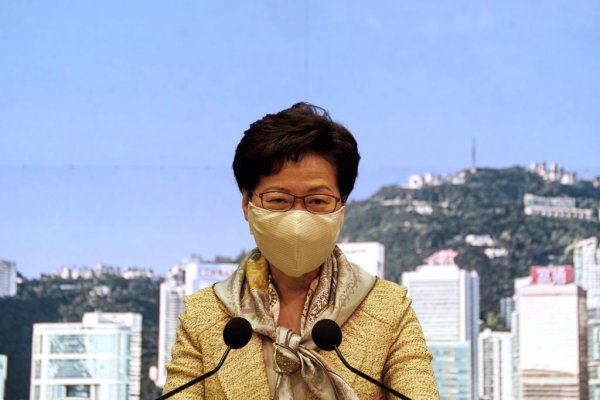