The COVID-19 Recession Should Be So Much Worse. Why Hasn't It Been?

A man walks past a store going out of business in Brooklyn, New York on May 5, 2020.
Angela Weiss—AFP via Getty Images
Ideas
By Zachary Karabell
Karabell is an author, investor, and commentator. His forthcoming book is Inside Money: Brown Brothers Harriman and the American Way of Power.

Nearly four months into the COVID-19 crisis, we are witnessing continued evidence of not just cost in lives lost but the economic devastation as well, with the new surge in cases in states previously spared casting doubt on everything from the opening of theme parks and sporting events to the viability of interstate travel. And yet, as bad as things are economically, it remains an open question why things aren’t worse. The answer is simple, and challenging: we may all be in this together as humans facing a virus but we are not equally in this together in bearing the economic toll.

We are not all in this together, by class or, as the recent protests amply highlight, by race, but we have a story in this country that says we are, and that story subtly shapes how we tell our economic narrative as well. We act as if the fact that many of us are hard hit means that the system must therefore be as well. And make no mistake, a less-bad economy in the age of COVID-19 is still a very bad one. But it is not an equally distributed less bad, just as it was not an equally or even equitably distributed good when times were better. The upside to that downside is that the system itself isn’t as harshly impacted; the downside is that the brunt hits those least able to bear it.

The national unemployment rate is likely at about 15%, given that 20 million people are receiving unemployment benefits, and the number who are underemployed is considerably higher. You would think that would translate into an economy-wide catastrophe, but while specific industries have been devastated, overall economic activity has not declined in sync with job losses. The sharp hit during April has been followed by a sharp rebound in many industries. Retail sales increased 17% in May and are only down 6% from May of 2019, which is bad but nowhere near as extreme as the job losses or the catering of air travel and the shuttered movie businesses for instance. New home sales in May not only rebounded from their April crater but were up from May of 2019, which is rather extraordinary given how challenging things are now and how robust the economy was a year ago.

And of course, then there is the stock market, which is up nearly 40% from the lows in March and as of late June is down about 5% year to date for the S&P 500. Markets have one benefit that no person has: the backstop of the Federal Reserve, which is committed to supplying almost endless liquidity in order to ensure no repeat of the 2008-2009 financial collapse. It is undoubtedly a good thing that the financial system is not currently imperiled, but it creates an even starker contrast when 20 million Americans are receiving unemployment benefits and millions more not even seeking employment.

Markets aside, why aren’t those tens of millions out of work having a more immediate negative impact? Why isn’t there an echo of the Great Depression when some of the numbers are Great Depression-like?

There are two reasons, one positive and one decidedly not. The positive reason is that for all the clunky ineptitude of the social safety nets created in April by Congress in the form of direct payments, small business relief and expanded unemployment benefits, those considerable amounts of money ended up buoying the depressed fortunes of tens of millions of people. In fact, given the extra $600 a week emergency supplement provided by the federal government, many people at the lower end of the wage spectrum pre-COVid have been taking home more money weekly than when they were employed. The average amount earned by the 40 million people who have received unemployment at some point since March was less than $750 a week; the average amount received under the various emergency programs? $970 a week. That helps explain why overall economic activity hasn’t declined in lock-step with unemployment or with the contraction of so many industries. Those juiced benefits are due to expire in July, however, raising the prospect that unless those are extended further the trajectory will worsen.

The other reason isn’t so benign. In terms of unemployment statistics and how we discuss work, a job is a job is a job. But in terms of wages and a living wage, all jobs are not created equal. Not even close. For many millions of jobs, the pay is barely above what constitutes the poverty line and isn’t enough to cover food and shelter for one person let alone a family. Hence the strong push in recent years to raise the minimum wage to at least $15 an hour, which many cities such as Seattle have done but which the federal government has not.

In the current crisis, the preponderance of job losses have been human service industries, ones that depend of face-to-face contact and cannot be shifted via Zoom into the digital realm. Those industries – restaurants, hospitality, travel, tourism, retail stores, events – are also amongst the lowest paid. Overall, average earnings in the U.S. are $28 an hour. But earnings for leisure and hospitality are $16 an hour and for retail $20 an hour. Those tens of millions of workers were never accounting for the same level of consumer spending or home sales or travel dollars or economic activity as the tens of millions who work in construction or manufacturing or technology or higher-end service industries such as finance and consulting or public servants like teachers and police. The result is that you can have 15-20% unemployment with 40 million people out of work at one point or another in the past months and not have a one-to-one hit to economic activity.

One powerful lesson of the past months is that massive government assistance actually matters and when it is large and direct and not funneled through humiliating hoops of means-testing and people having to justify their vulnerability and need, you can actually maintain a fair amount of human activity and meet people’s needs. Providing nearly $1,000 a week to people for a few months has been a raise for many of them, which has provided a glimpse into how much we have fallen short of providing a basic level to all people in an affluent society. It is hard to see silver linings in a crisis this deadly, but if we learn that no, we aren’t all in this equally, but yes we have the means to ameliorate those inequities, then the crisis will not have been all for the worst. It will have been the long-needed wake up that we have the power to provide basic economic security to everyone. All that has been lacking till now is the will to do so. 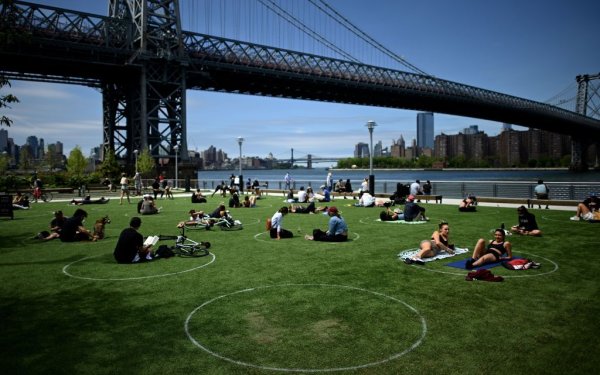 The History of 'Social Distancing' Is Longer Than You May Think
Next Up: Editor's Pick