Beyoncé Calls On U.S. Citizens to Vote 'Like Our Life Depends on it'

In this screengrab, Beyoncé is seen during the 2020 BET Awards. The 20th annual BET Awards, which aired June 28, 2020, was held virtually due to restrictions to slow the spread of COVID-19.
Getty Images
By Mélissa Godin

Beyoncé has called on American citizens to vote in the upcoming presidential election during an acceptance speech for a humanitarian BET award she was given by Michelle Obama. She dedicated the award to protesters around the U.S. and encouraged viewers of the award show to vote “like our life depends on it,” adding “because it does.”

“I want to dedicate this award to all of my brothers out there, all of my sisters out there inspiring me, marching and fighting for change,” she said in her video address. “Your voices are being heard and you’re proving to our ancestors that their struggles were not in vain. Now we have one more thing we need to do to walk in our true power, and that is to vote.”

Beyoncé was given the award for her work supporting the Black community through her foundation, BeyGOOD, and for ensuring that coronavirus test kits were available for Black residents living in Houston, Texas, the city where she grew up. Earlier this month, she released a song that celebrates Juneteenth called Black Parade that is also the name of a new directory of Black-owned enterprises she launched last week.

“You can see it in everything she does, from her music that gives voice to Black joy and Black pain, to her activism that demands justice for Black lives,” Michelle Obama said before presenting Beyoncé with the award. Obama celebrated Beyoncé for “calling out sexism and racism when she sees it.”

Beyoncé was one of many artists that spoke out against racism at the BET award ceremony this year, which celebrates Black artists and athletes. She called on voters to “dismantle a racist and unequal system.” Roddy Ricch wore a Black Lives Matter shirt while performing. 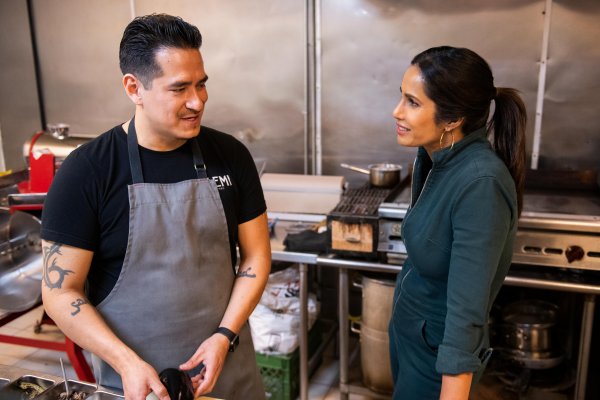 The Best New TV Shows of June 2020
Next Up: Editor's Pick