Recently, “face mask exempt” cards have appeared on social media, claiming the U.S. Department of Justice (DOJ) has cleared certain individuals from wearing protective face coverings to stem the spread of COVID-19. This week, the DOJ declared that it has not issued and does not endorse any such identification.

Many images of “face mask exempt” cards circulated online include the statement: “Wearing a face mask posses a mental and/or physical risk to me. Under the Americans with Disability Act (ADA) I am not required to disclose my condition to you.” Many images also include the DOJ reporting number, the DOJ’s seal and the warning: “If found in violating of the ADA you could face steep penalties.”

The U.S. Attorney’s Office of the Middle District of North Carolina posted an example of one of these cards on Friday, tweeting, “Fraudulent Facemask Flyers, ‘Exempt’ Cards not Authorized by U.S. Department of Justice.”

“Do not be fooled by the chicanery and misappropriation of the DOJ eagle,” U.S. Attorney Matthew G.T. Martin of the Middle District of North Carolina said in a statement on Thursday. “These cards do not carry the force of law. The ‘Freedom to Breathe Agency,’ or ‘FTBA,’ is not a government agency.”

“The Department urges the public not to rely on the information contained in these postings and to visit ADA.gov for ADA information issued by the Department,” the statement continued.

The U.S. Attorney’s Office for the District of Maine shared another example of a fraudulent “exception card” in a tweet on Friday. “These documents are not issued or endorsed by the [DOJ],” the tweet said.

Several of the cards appear to have been created by a group called the Freedom to Breathe Agency (FTBA), a Facebook group that aims to resist government orders that promote or dictate the wearing of protective face coverings.

“Our Face Mask Exempt card was issued as an educational tool based on overwhelming amount of citizens reaching out to us for having health issues and unable to wear a mask,” the groups said in a statement to TIME. “The exempt card was issued by FTBA and not ADA/DOJ. There was a misunderstanding with the seal and it was since changed to avoid any further confusion. The FTBA card is valid and legitimate educational tool that refers US citizens to their legal and human rights under the Constitution of the United States to prevent discrimination, intimidation and coercion.”

The U.S. Centers for Disease Control and Prevention recommends that all people, regardless of if they’re experiencing COVID-19 symptoms, wear protective masks in public settings, especially in areas where there’s significant community transmission, to limit the spread of the virus.

As of Saturday morning ET, the U.S. has identified at least 2,467,874 cases of COVID-19 and at least 125,039 confirmed deaths, according to a tracker from Johns Hopkins University. 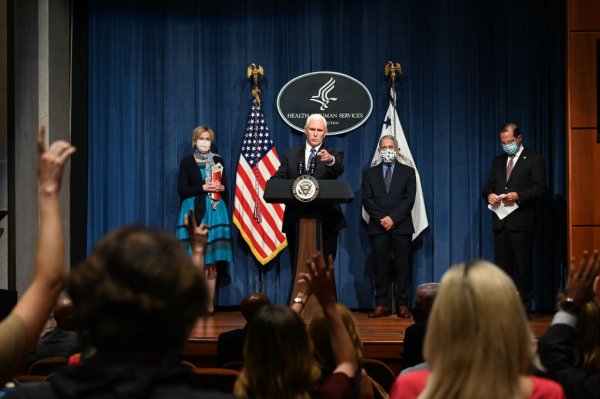