What's Happening Right Now in America Is a Start. But There's No Quick Fix for White Supremacy

"Eminent Domain," acrylic on canvas
Painting by Charly Palmer (photograph by Travis Grissom)
Ideas
By Damon Young
Damon Young is the author of What Doesn’t Kill You Makes You Blacker: A Memoir in Essays.

The whiplash-inducing white-guilt dramaturgy currently captivating America, which segued from national protests for police reform into an all-encompassing referendum on literally everything racist, reached a crescendo on the afternoon of Friday, June 19.

I was off that day, because the company I work for made it a holiday. Because it happens to be the day, 155 years ago, that Union Army General Gordon Granger declared that all enslaved Black people in Texas were now free too.

Since then, Juneteenth has shifted from a day Black Texans spent BBQing and storytelling to a day that some Black Americans celebrate, some of us acknowledge, and some of us don’t even know exists. The latter is a damning indictment of the American educational system. If the schools I attended were my only resource for learning about slavery, I would’ve thought that Abraham Lincoln personally went block to block, like an Amazon truck, to deliver freedom–and I went to “good” schools.

But in 2020, Juneteenth became another way for America to signal that it’s finally really, really, really serious about this racism thing. Brands released statements. Businesses declared holidays. Taylor Swift retweeted the Root. Some of my friends even shared that they received random funds, through Venmo and Cash App, from white people they happen to know. And then, at 2:52 p.m. E.T., the Americanization of this complex and emotional day reached a peak. This is when Snapchat, through its official Twitter account, tweeted an apology for the Juneteenth Lens–a filter where it asked users to smile to break a chain superimposed behind the user’s head. At this rate, by the time you read this, Juneteenth might have already grown sentient and replaced Joe Biden as the presumptive Democratic nominee for President.

I do not know what is happening in America right now. The velocity of the collective national willingness to acknowledge anti-Black racism has been unsettling. Eerie. What feeling other than a deep and paralyzing disorientation are we supposed to possess when NASCAR (NASCAR!) decides to ban the Confederate flag from its stadiums? (My first thought when hearing about that? “Well, I guess there must be two NASCARs.”) But while the what remains cloudy, the why–why this is happening right now–is more clear.

I still haven’t watched the footage of George Floyd’s last nine minutes on earth. The widely disseminated screen grab of Derek Chauvin kneeling on Floyd’s neck, like how you’d maybe kneel on the pavement to get a better camera angle for a portrait photo, was enough for me. And the way he died–not just that he was killed, but how–matters. As brutal as witnessing a video-captured shooting can be, the Bang! Bang! Bang! happens so quickly that processing exactly what you just saw takes some time. This was different. Depraved indifference is one of those terms that might be used in a courtroom to describe what happened there, but what Derek Chauvin did transcends legal jargon. It was just depraved. Evil.

If this had happened in 2019, or even January of this year, I’m certain there would have been national protests. But what’s different now–what has changed each of our lives, forever; why people around the world are in the streets–is COVID-19. We are currently in a global pandemic that has killed more than 100,000 Americans, and our death rates don’t appear to be dropping as much as other countries’ have. And the abject mismanagement of our national response to this virus is largely due to white supremacy. White supremacy is why a destructive, petty, ignorant and criminally unfit man is our President. White supremacy is how a belief in science has somehow become a partisan issue. Lunacy-inducing white supremacy accounts for the absurd theater of American men and women threatening and terrifying baristas while angrily refusing to don masks, because of some nebulous concept of “freedom.”

What COVID’s devastation–and the bizarre response to it in some pockets of America–has done is make the tracks and tentacles of white supremacy less concealable and spinnable and more plain. We’re essentially in the midst of two pandemics, and it seems as if white people are seeing, finally, that white supremacy kills them too. We (humans) are incentive-based beings, and there’s no greater incentive than remaining alive.

Unfortunately, for them, for us, for everyone, there’s no easy solution here. No microwavable absolution. No quick fix for a foundational rot. Removing Confederate monuments is a noble gesture, I guess. But what about the slave owners whose faces are on our money? How do we reckon with that? A company’s statement of support for Black Lives Matter is cool. But what about the decades of discrimination and pay inequities at that same company? The random cash white people are Venmoing to us is awesome. (I haven’t received any myself, though my fingers are still crossed.) But how do you begin to remedy the wealth gap where Black families have 10¢ for every dollar possessed by white families? There’s no industry, no institution, no person in America unaffected by anti-Blackness, and no hashtag to retweet or holiday to finally acknowledge to make it better.

That said, as cynical as I want to be–as I need to be to protect myself–what’s happening now is a start. But it’s just that. A start. Whether America has the will and the rigor and the stamina to see this through is yet to be seen, and I won’t hold my breath waiting for it. But I did enjoy Juneteenth off. Did some work around the house and went for a nice walk. So thanks for that, at least. 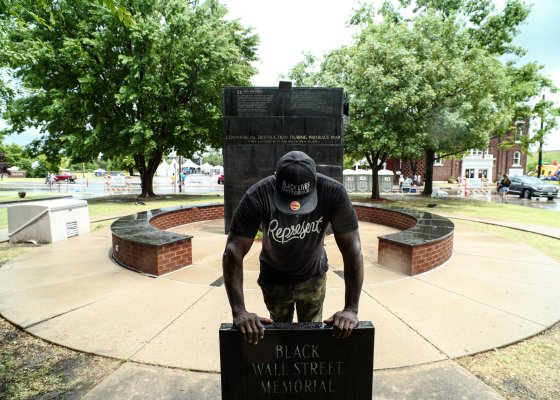