In any normal circumstances, the publication of a book like John Bolton’s would set off a political earthquake. In page after page The Room Where It Happened, he describes a president who displays a startling level of ignorance, incompetence and even outright corruption in his conduct of foreign affairs. Bolton, a staunch republican and conservative, even argues that the Democratic impeachment effort was too narrow. After all, Bolton claims, Trump frequently placed his personal political interests over the national interest in the conduct of foreign policy.

And yet, here we are, with a sense of déjà vu. It’s not that Donald Trump’s behavior doesn’t matter – indeed, prior to the Covid-19 pandemic it was a key reason why his approval rating was stuck in the low-40s in spite of a prosperous economy at home and relative peace abroad. The problem that his supporters hold tight to him in spite of the fact that he routinely engages in behavior that they’d condemn in any other politician.

Gallons and gallons of ink have been spilled explaining this phenomenon, and all the popular theories have some merit. Yes, he fights the media and the Democrats, and GOP base voters will tell you that they long for a “fighter.” Yes, there’s a transactional element to some of his support. So long as he nominates good judges and grants his base the political victories they want, he gets a pass on his personal behavior. But to this day, I think journalists gloss over a separate, important reality – his voters simply don’t believe many of the facts about Trump’s conduct.

John Bolton’s book helps explain why. The scale of Trump’s incompetence, combined with his obsession with personal praise and ostentatious displays of loyalty create even in well-meaning people an incentive to publicly lie about Trump (or at least stay silent) to protect their access and, sometimes, save the nation from terrible choices.

The cycle goes something like this – those who get close to the president understand and discern precisely the chaos that Bolton describes. To stop the worst mistakes (Bolton claims that Trump once threatened to quit NATO, our nation’s most important military alliance), one must be “in the room where it happens,” to quote Bolton, quoting the musical Hamilton. But to stay in the room, one must engage in the flattery and the loud public defenses Trump requires.

This flattery and these defenses – amplified through Fox News, talk radio, and other conservative outlets – are heard and believed by the president’s supporters. After all, the defenses are coming from the people who are in the room, the statements are on the record (as opposed to the anonymous leaks the media often relies upon), and they’re unequivocal.

The result is a kind of parallel universe of knowledge. Trump supporters will say, “Yeah, yeah we know he’s not perfect. Concerns about his character are ‘baked in.’” But millions upon millions don’t actually know the facts about Trump’s conduct and character. The relentless flattery, the relentless defense, and the mistrust of media (with every mistake highlight and relentlessly amplified by Trump’s supporters) creates a reflexive denial even of established facts.

Earlier this year, I witnessed a perfect example of the phenomenon in action. I had the privilege of debating Eric Metaxas, a radio host, bestselling author, and one of Trump’s most outspoken Evangelical defenders. During the debate, I made multiple references to Trump’s conduct.

I observed that his campaign “tried to solicit aid from a geopolitical rival.” This is fact. Among other things, his son, son-in-law, and campaign chair met in Trump Tower with a Russian lawyer named Natalya Veselnitskaya with the intention of obtaining documents that would “incriminate Hillary” as part of “Russia and its government support for Mr. Trump.”

Moreover, I noted that he “tried to extort from a vulnerable ally” a promise to “launch an investigation of a political rival and an investigation of a frankly insane conspiracy theory.” There is overwhelming evidence he did exactly that, and the evidence starts with the memorandum read out of the July 25, 2019 telephone call between President Trump and Ukrainian president Volodymyr Zelensky.

I also said that President Trump misled America for week after week after week about the threat of the coronavirus. The evidence here is unequivocal. The examples are legion. On January 22 Trump said, “It’s one person coming in from China, and we have it under control. It’s going to be just fine,” In February he promised, “The Coronavirus is very much under control in the USA.”

And how did Metaxas respond to the facts about Trump’s conduct? “If I believed what David said,” he replied, “I would be with him on this [opposing Trump].” The relentless defenses of Trump, the relentless praises, and the relentless attacks on the media had worked their dark magic. The facts were not facts.

Could Metaxas actually, truly believe I was sharing fake news? After all, he’s a leading Evangelical public figure, a person who’s engaged in the daily political debate. While I can’t peer into his heart, I know from personal experience that the Trump media defense complex features many individuals who have convinced themselves that the truth is a lie.

John Bolton is no longer in the “room where it happens.” Other Americans are tasked with doing their best to maintain our alliances, prevent the president from doing favors for dictators, teach him basic facts about history and geography, and get him to pay close attention during his security briefings. Some of those Americans are even now preserving their access to the president by vigorously defending Trump and launching brazen attacks on Bolton.

Bolton’s book should cause an earthquake. It won’t. And it won’t in large part because even Republicans who are appalled by Trump and work hard to temper his worst impulses have immunized their voters against the truth. 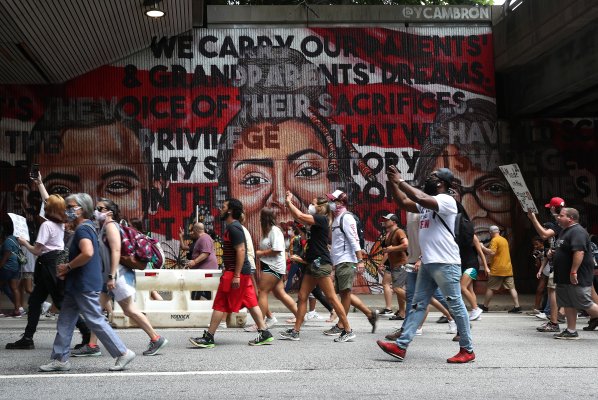 We Must Use Our Power to Dismantle Bias
Next Up: Editor's Pick