FDA Warns These 9 Hand Sanitizers Could Be Toxic

The U.S. Food and Drug Administration (FDA) is warning consumers should avoid using any hand sanitizers from a particular manufacturer because they could contain a toxic ingredient.

The FDA says the products, manufactured by Eskbiochem SA de CV in Mexico, could contain methanol, which can be toxic when ingested or absorbed through the skin.

In a statement on Friday, the FDA said it had identified the following Eskbiochem hand sanitizers:

Methanol — also known as wood alcohol — “is not an acceptable ingredient for hand sanitizers and should not be used due to its toxic effects,” the FDA said in its statement.

If you’ve been exposed to these sanitizers, the FDA recommends seeking immediate treatment as it is “critical for potential reversal of toxic effects of methanol poisoning.” Side effects can include “nausea, vomiting, headache, blurred vision, permanent blindness, seizures, coma, permanent damage to the nervous system or death,” the FDA said. And make sure to throw out the sanitizers in “appropriate hazardous waste containers” rather than pouring them down the drain or flushing them down the toilet, the FDA also advised.

“We would never do that, send a toxic chemical maliciously,” Escamillo told the Times.

While everyone who has been exposed to these products should seek treatment, the FDA says children who accidentally ingest the sanitizers or young people who drink them to substitute alcohol are more at risk of poisoning.

As the COVID-19 pandemic continues around the world, dependence on hand sanitizer has become a necessity for many. In its statement on Friday, the FDA said it is “concerned with false and misleading claims for hand sanitizers,” including that certain sanitizers can provide 24-hour protection against viruses like COVID-19. “[There] is no evidence to support these claims,” the FDA said in its statement.

The FDA and the U.S. Centers for Disease Control and Prevention (CDC) recommends washing your hands often — especially after going to the bathroom, before eating or after coughing or sneezing — using soap and water for at least 20 seconds. The CDC also recommends using hand sanitizer that contains at least 60% alcohol if soap and water are not available.

The FDA said that if you are experiencing any problems with a hand sanitizer you should submit a report to the MedWatch Adverse Event Reporting program online, via a form or via fax at 1-800-FDA-0178. 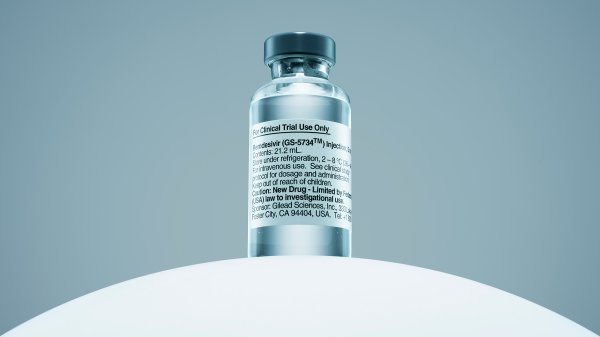 Gilead is Testing An Inhalable Form of Intravenous Remdesivir
Next Up: Editor's Pick