An armed officer was charged with trespassing Saturday morning after he being arrested outside a building overlooking the Robert E. Lee Monument in Richmond, Va., police said in a statement.

The man was identified as 38-year-old Riley O’Shaughnessey, an officer with the Richmond International Airport Police Department, per police. (O’Shaughnessey’s attorney could not immediately be identified.)

Police said they were called to the area around 6:30 a.m. ET to investigate reports that a person was standing on the roof “of an unoccupied building overlooking the Lee Monument.” Eye witnesses told police the individual was holding a gun, per the statement.

Officers were preparing to enter the building at around 7:47 a.m. when an individual was “spotted just outside the building,” per the statement, and was arrested and taken into custody. Police said he was carrying a handgun.

Police said O’Shaughnessey did not receive a weapons charge because he was carrying the gun legally.

While O’Shaughnessey is an officer with the Richmond International Airport Police Department, he was not carrying any police identification on him at the time, the statement added.

When asked for comment, a spokesperson for for Richmond International Airport said The Capital Region Airport Commission does not comment on personnel matters. 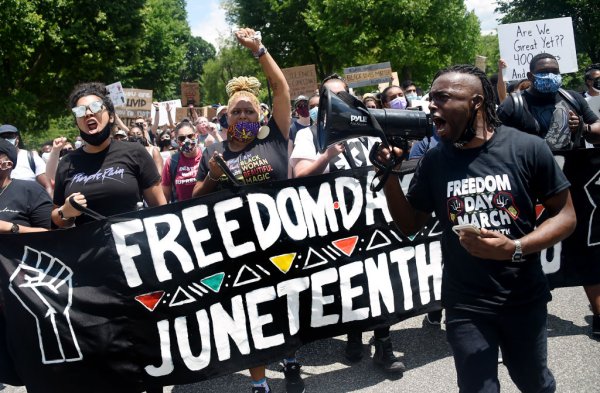 How Millions of Americans Observed Juneteenth
Next Up: Editor's Pick