All my life I have wanted to be two things—a doctor and a dad. I accomplished my first goal more than a decade ago, but it was only a little over three months ago that my other dream came true when my wife, Diane, gave birth to our beautiful daughter Nzuri.

I had been looking forward to experiencing all our Pan-Africanist traditions to celebrate the birth of a child, but the COVID-19 pandemic was ravaging the United States, especially the Black and Latino neighborhoods of New York City, where I lead health-equity initiatives for the nation’s largest health department. Now, as the nation grapples with the murders of Black Americans at the hands of police and white vigilantes, I feel even less safe about bringing a child into the world.

This is not the first Father’s Day I envisioned.

Even before I became a father, I was keenly aware that no matter how many degrees or accolades I possess, my life would be always up for grabs. It’s a lesson I learned from Rodney King and Emmitt Till and many more whose names I may never know. It’s one that was reinforced by the killing of George Floyd. It’s a burden that every Black family carries—the possibility of sudden, untimely death.

While dealing with the weight of oppression, Black male doctors’ lives are also jeopardized just by showing up to work. The current pandemic has given many of us a horrible sense of déjà vu; I remember working with Dr. Samuel Brisbane in Monrovia, Liberia, right before he became West Africa’s first casualty to the 2014 Ebola epidemic. Now I mourn every Black male doctor we have lost in New York City to COVID-19, including trauma surgeon Dr. Ronald Verrier and ICU physician Dr. James A. Mahoney.

For months, we have all been consumed by discussions of life and death, and trying to maintain some normalcy in our day-to-day life. And during this time I’ve been thinking about what it means to lose Black male doctors. According to the Association of American Medical Colleges, in 1978, there were 1,410 Black male applicants to medical school, and in 2014, there were just 1,337. In 1978, only 542 Black men across the nation graduated from medical school. In 2014 it was even less—515. That means each Black male doctor that the field of medicine loses is unlikely to be replaced.

Black healers, including nurses, therapists and holistic practitioners, have a unique role in addressing health inequities. We’re more likely to practice in communities of color, provide access for diverse groups of patients and meet public health demands due to an authentic dedication to community engagement. And yet creating a larger pipeline for Black male doctors is never considered in the proposed solutions to mitigating the causes that overwhelmingly take Black men’s lives, whether it be infectious disease or exposure to community violence.

The erasure of Black men from several parts of American society, including health care, is by design. Medicine was never set up to value Black lives, which is reflected not only in health outcomes that often pathologize Black people but also in who has access to medical school, who graduates, who gets elite fellowships—all the building blocks for a successful medical career.

Black colleges, always facing budget cuts, have been nurturing Black doctors for generations. And Black men continue to mentor young brothers (I co-founded Young Doctors DC in 2012) to undo the conditioning of racist school systems that infer they aren’t smart enough. But these amazing efforts aren’t enough to completely remedy the underlying problem. Structural racism, even in academic medicine, should never be the responsibility of Black people to solve.

I’m proud to serve alongside other Black male doctors in one of the largest public health agency in the U.S. Together, my colleague Dr. Daniel Stephens, a pediatrician who helms the Division of Family and Child Health, and I speak truth to power about the effect racism has on health. It’s unacceptably rare that two Black men lead large divisions or departments in hospitals or health departments; we must support each other while clearing a path for others to easily follow behind.

Nzuri is already paying the cost for having a Black doctor dad. She can sense my energy. She’s fussy and distressed and fitfully refuses her regular evening nap. She knows that my fears are affecting how I show up.

But the qualities that make good doctors also make good dads—empathy, compassion and trust. Even though she’s only 3 months old, her mom and I sat down to explain what was happening in the world and how it was making us feel. We told her we loved her and that she was safe. Even if America doesn’t keep its promise to us, I will always fight to keep my promise to her. 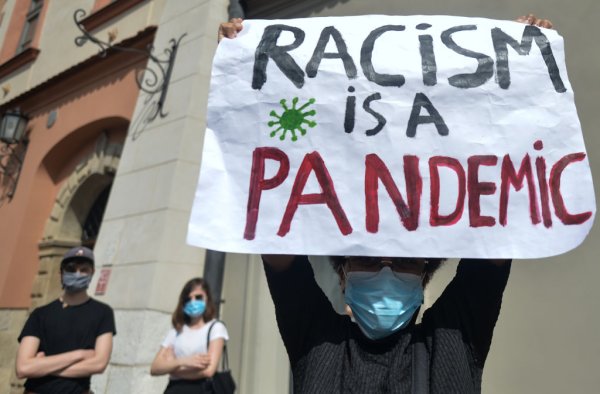 The COVID-19 Pandemic Shows Why We Must—And How We Can—End Racial Injustice in Health
Next Up: Editor's Pick