Angelina Jolie: The World's Refugee Crisis Is Bad Now—But It's Only Going to Get Worse

As the burning injustice of discrimination and racism in America bursts to the forefront, we must also address persecution and oppression rising globally, depriving millions of their rights, their liberty and their physical safety.

The U.N. Refugee Agency has published its latest annual report on the state of human displacement in the world and it is stark reading. Nearly 80 million people—the highest number since records began, according to available data—have been forced from their homes by extreme persecution and violence, and are living as refugees, asylum seekers or people displaced within their own countries. For the first time, forced displacement is affecting more than one percent of humanity, or 1 in every 97 people.

These are people fleeing attacks on schools and hospitals, mass sexual violence, the siege and starvation of whole cities, the murderous oppression of terrorist groups, and decades of institutionalized persecution based on religion, gender or sexuality.

It is not just the overall number of forcibly displaced people that is shocking. More people are being forced to leave their homes on a larger scale in more places and at one of the fastest rates in living memory. Global displacement has almost doubled since 2010. The number of refugees in sub-Saharan Africa has tripled in the same period. And the number of countries where the United Nations High Commissioner for Refugees is working to support internally-displaced people has gone from 15 in 2005 to 33 today. This is before the full economic devastation of COVID-19 strikes, threatening hunger and starvation and deeper insecurity for millions.

I’ve witnessed the change with my own eyes. My first 10 years with UNHCR, beginning in 2000, was focused mainly on helping refugees return to their homes in countries like Cambodia, Bosnia and Sierra Leone. It involved landmines being cleared, homes rebuilt, roads opened up and markets restarted. International institutions—however imperfect—delivered a small measure of justice and accountability.

From the mid 1990s until around 2010, the number of displaced people remained relatively stable worldwide, because even though new displacement continued, many refugees were eventually repatriated after peace agreements, or built permanent homes in their host nations, or were resettled in new countries.

But in the last 10 years, what little justice and solutions were available for refugees has dried up. I’ve visited Syrian refugees roughly a dozen times in the decade since the conflict in that region began. Refugees I met as children now have their own children and still live in the same unsafe tent encampments, with aid rations dwindling, and no prospect of a just, equitable political settlement in their country that would enable them to return home in safety.

Several factors seem to be at play. This past decade began with a global recession that has fueled hardship and anger and discontent. Many countries and communities around the world have shown extraordinary generosity to refugees living in their midst. But even as, across the world, refugee medics, nurses and healthcare workers serve on the frontline of the COVID-19 response, refugees are often regarded as a burden, greeted with xenophobia and racism, and denigrated and dehumanized in politics and the media.

Collectively, nations seem to have stopped regarding human displacement as a temporary, man-made phenomenon we have the power to influence. But from my personal experience the vast majority of refugees want to return home, and would do so, if their home countries were stable. Working to solve the conflict in any one of the top five refugee producing countries, from Syria to Myanmar, would bring the overall number of displaced people down by millions.

We are quick to criticize the human rights records of adversaries but silent when conflicts creating displacement and misery involve our allies. When we start to pick and choose which countries or peoples we help, from our humanitarian assistance to our asylum policies, we ourselves are discriminating: assigning different levels of importance to different peoples, races, religions and ethnicities, violating the fundamental principle that we are all born equal.

In our school years, we Americans are not taught enough to respect and admire the cultures and contributions of countries with histories far longer than our own. Or indeed to have a truly deep understanding of our own history, and the acts our country was built upon. That is one reason why, in my early twenties, I first wanted to work with UNHCR.

What has become clear to me through my work is that the fight for human rights and equality is universal. It is one fight, wherever we live, and however different our circumstances might be.

There is a dividing line running across our world between those who have rights and freedom and those who do not. Who we choose to stand with, and how much we are prepared to change and to fight, should not stop at our borders. 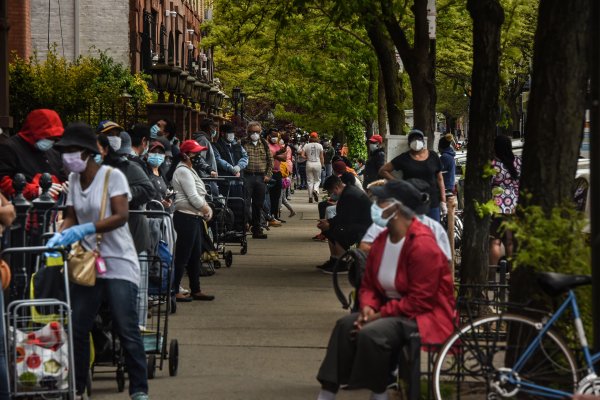 The Coronavirus Crisis is Changing U.S. Views
Next Up: Editor's Pick