'We’re Not Going to Know Who the President Is Until Well Into November.' These Are the Scenarios Worrying Election Officials

A woman hands out surgical masks to people standing in line to vote in Wisconsin's spring primary election in Milwaukee on April 7, 2020
Sara Stathas for the Washington Post/Getty Images
By Lissandra Villa

Washington Secretary of State Kim Wyman is worried. In her state, counting ballots typically entails election officials working shoulder to shoulder, sometimes hundreds to a room. It’s a scene that’s nearly unimaginable in the era of coronavirus. So Washington is working on safety measures, from expanding the space in processing centers to setting up plexiglass between work stations.

Health and hygiene are only the start. While all Washington elections are conducted by mail, other states are less equipped or experienced with handling the large volumes of mail or absentee ballots this year will feature due to the pandemic. Already states like Indiana, Pennsylvania, Ohio and Georgia have seen delayed results and reports of voter disenfranchisement as a result of a rapid expansion of vote by mail.

“I’m concerned nationally that you’re going to have this crush of mail-in ballots that come in on Election Day across the country, the volume is going to swamp election officials, and they are not going to be able to physically get through the processing for days or weeks,” says Wyman, a Republican. “I think that we’re not going to know who the President is until well into November.”

Since March, the National Association of Secretaries of State elections committee has been holding a weekly call to swap information on preparing for an unprecedented election. There are hundreds (thousands!) of ways an election can go awry anyway, but the coronavirus pandemic has complicated preparations. It’s not just the intake of absentee ballots that’s worrying officials like Wyman. The pandemic has brought up a range of new issues, from determining whether coronavirus is a valid reason voters can cite to request an absentee ballot to recruiting poll workers to ensuring there are enough financial resources to make the necessary adaptations.

Nothing less is at stake than the integrity of America’s elections and voters’ faith in the process. And it’s a race against time for states to pull it off. “You asked me what keeps me up at night,” Wyman says. “This is it.”

TIME interviewed nine secretaries of state from both parties. Here are their top concerns:

Will coronavirus be judged a valid reason to request an absentee ballot for the general election?

About a third of states require that voters provide a justification for requesting absentee-ballot applications. When it became clear that coronavirus was going to affect primary contests, election officials in those states had to determine whether COVID-19 was a valid medical excuse. The answer, in all states but Texas and Mississippi, was yes.

States like Kentucky, Indiana, and Louisiana made changes such as opening absentee voting to all eligible voters or dropping the question from the absentee-ballot application. But none of those adjustments necessarily extend to the general election.

In West Virginia, another state that requires a reason to get an absentee ballot, clerks process the absentee ballot applications and mail them out to those who are eligible. “We’re getting asked that all the time,” says West Virginia Secretary of State Mac Warner, a Republican. “I think it’s a reasonable, rational reason, and I suspect that the clerks will accept that as a reason for sending them absentee ballots.” But Warner, who plans to meet with the county clerks now that the primary is over, acknowledged he did not yet have a firm answer.

In Alabama, Secretary of State John Merrill, the chair of the Republican Secretaries of State Committee, says it’s “definitely not” certain that voters will again be able to check the physical illness or infirmity box on their absentee ballot application over COVID-19 concerns, the way they are able to for runoff elections on July 14.

“We don’t know what’s going to happen for November. And we don’t want to go ahead and establish guidelines for a period of time that has yet to arrive,” Merrill says. Several other Secretaries of State from both parties stressed the importance of early preparations, noting that delays in planning could result in chaos.

Will in-person voting options be ready?

Election officials are worried about recruiting poll workers, many of whom are elderly, putting them in a high-risk group for the coronavirus. States are taking creative approaches to draw in substitutes, such as recruiting National Honor Society high school students in need of community service hours. Not having enough poll workers willing to work during a pandemic has already proven to be a pitfall in states like Georgia and Wisconsin, whose primaries featured long lines and poll sites that were forced to close. (Georgia’s issues were also in part caused by new voting machines.)

States are also busy securing Personal Protective Equipment for poll workers, from masks to hand sanitizer. Maine, for example, is looking at purchasing pens for voters to eliminate yet another surface they have to be conscious of disinfecting, according to Secretary of State Matthew Dunlap.

In California, the Governor has ordered that all registered voters be mailed ballots for the general election. But Secretary of State Alex Padilla also stresses the importance of providing adequate in-person voting options for those who are unable to vote early or by mail. “We’re going to clearly be emphasizing vote by mail, vote by mail, vote by mail. But this is not [a] vote-by-mail only election,” Padilla says. “We’re committed to the in-person options for the voters who need it, whether it’s out of accessibility concerns, maybe language assistance that’s required, replacement ballots that may be necessary, or to continue to allow for same-day registration, which we have in California.”

Is there enough money to put the necessary measures in place?

Much of the election preparation is being paid for with federal funds from the CARES Act, a coronavirus-response bill Congress passed in March, which allocated $400 million dollars for states to adjust their election procedures due to the virus. The bill requires states who spend federal funding match a portion of that money with some of their own. Rustling up that money has presented challenges for states whose revenues have cratered.

Wayne Thorley, Deputy for Elections in Nevada, said in an email that coming up with matching funds does “represent a significant hardship, and we are still not certain exactly how we are going to meet the match.” In an April 2 letter to Senate Majority Leader Mitch McConnell and Senate Minority Leader Chuck Schumer, Paul Pate, the Republican Secretary of State from Iowa, outlined some of these concerns on behalf of the National Association of Secretaries of State. But election officials tell TIME they’re unsure how exactly the matter will be resolved.

And many Secretaries of State believe they need more money to pull off the changes required by the virus. “It would be very helpful if the federal government could give another round of CARES Act money because we’re seeing that the pandemic and all its consequences has touched so many more aspects of our society, including our elections, and frankly we did not get anywhere near as much support for elections as we should have in the last round,” Kathy Boockvar, Secretary of the Commonwealth in Pennsylvania, said in a Zoom interview from her home.

Boockvar says the additional money would go directly to the counties, providing equipment and supplies. The Brennan Center estimates that Congress should make $4 billion in additional funds available to make the necessary adjustments. “Given the scope of the challenge, large-scale preparation, backed by the concerted support of the government and the public, is needed immediately to ensure that the 2020 election is free, fair, accessible, and secure,” the report states. 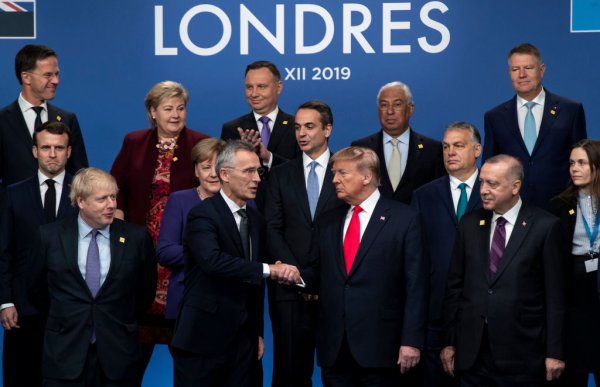 Why the Alliance Between Europe and America is Falling Apart
Next Up: Editor's Pick