As Trump Comes to Tulsa, Teachers Grapple With How to Talk to Students About the City's 1921 Race Massacre

Black smoke billows from fires during the Tulsa Race Massacre of 1921, in the Greenwood District of Tulsa, Oklahoma.
Corbis—Getty Images
By Olivia B. Waxman

On June 10, the same day that President Donald Trump announced that his first major in-person campaign event since the novel coronavirus pandemic hit the U.S. would be a rally in Tulsa, Okla., near the site of a 1921 race massacre, a panel of Tulsa public school teachers met on a Zoom call. They were there to talk to other educators about how to teach that history — and how to link the events of nearly a century ago to current news.

“The unfortunate and fortunate truth is that almost every year that I’ve taught the Tulsa Race Massacre, there has been some type of civil uprising, somewhere in the U.S., that’s associated with the same racism that still exists today,” Jayson Robertson, a high school poetry teacher, told teachers during the fourth and final webinar in a series on learning how to teach the history and legacy of the 1921 Tulsa Race Massacre. “All history is hard history. People die often in history. But students are not introduced to the uncomfortable truth that people made decisions to kill. The nation is still being confronted with some of the same things that happened 100 years ago.”

“We may be removed in time but we are definitely not removed in the way we deal with race in this country,” added Joe Nelson, who teaches 11th grade English and said that the truck that was driven through a crowd of protesters in the city on the May 31 anniversary of the massacre reminded him of the level of aggression seen nearly a century ago.

Teaching about the history of the race massacre is fairly new even to many educators in Tulsa. The May 31-June 1, 1921, attacks on the city’s Black residents were set off by rumors of a young Black man raping a young white woman. A white mob torched and robbed the affluent Greenwood commercial and residential district, a neighborhood also known as Black Wall Street. African Americans who had gone West to more freely make their fortunes found their livelihoods burned to the ground overnight. Perhaps as many as 300 people were killed. In the years that followed, the incident was rarely discussed in public forums or taught in schools.

But awareness has grown in the last few years as the centennial has approached, especially since the city’s mayor backed the search for mass graves and via the educational efforts of The 1921 Tulsa Race Massacre Centennial Commission, which aims to ensure this history will never be forgotten again. The sessions on the topic were co-hosted by the Commission and provide teachers with an online library of resources for teaching the race massacre and moderating class discussions on race issues. While the first three sessions were focused on the history of the massacre and its legacy, the June 10 event dove into current events and how to manage a classroom during those discussions, covering everything from how to walk students through primary sources on the event to the dynamics between white teachers and Black students. (One idea raised by white educators was the importance of acknowledging that even as a teacher, you are not the ultimate authority on racism, so that students feel more comfortable speaking up about their own experiences.)

In addition to increased awareness from the centennial, current events have provided ample opportunity to link back to common themes. The COVID-19 pandemic, which is disproportionately affecting Black people, has magnified enduring racial disparities, and helped add fuel to the ongoing Black Lives Matter protests that were sparked by recent incidents of police brutality. (And this conversation isn’t only happening in Tulsa. Teachers are gathering nationwide to compare notes about teaching the history unfolding right now in general, via resources like the Zinn Education Project‘s People’s Historians series.) On top of that, the Trump rally in Tulsa was supposed to be held on Juneteenth, the holiday that commemorates the end of slavery; though it was rescheduled after backlash, the rally’s proximity to the 1921 massacre site and to Juneteenth still provides a teachable moment.

“There’s a through-line between the history of slavery, the race massacre and the George Floyd killing: the presence of racist terror, which has persisted to this day in different forms,” the panel’s moderator, historian Karlos K. Hill, Steering Committee Member of the Tulsa Race Massacre Centennial Commission, and Department Chair and Associate Professor of African and African American Studies at The University of Oklahoma, told TIME after the webinar. “That’s the one constant in Black life. Things have changed. There has been material progress, political progress, educational progress, and one would think that progress would contribute to the end of racist violence, racist terror. But it has not.”

But at a time when this history is more important than ever, the logistics of remote learning may get in the way of this kind of difficult history being taught next year.

Candice Pierce, a 7th grade teacher, told webinar participants she didn’t get to finish the race massacre unit she usually teaches in April because of inconsistent student attendance rates and unreliable Internet connections in students’ households, which left her afraid the material wouldn’t be addressed properly. “I still haven’t come up with a great answer as to how I want to do that,” she said. “I don’t know how [teaching] is going to look next year, so I’m not even sure what to plan for, but it’s something that I’m working on.”

In a phone call with TIME after the session, Pierce explained that she would usually have students read historical documents containing dated racist language in the classroom. But she worries that assigning such material as homework could upset students who continue to experience racism and have these words hurled at them in daily life or online. “I don’t want them sitting at home and not having an outlet to discuss” right after reading, she said.

Robertson, the poetry teacher, told TIME after the webinar that he’ll be on the lookout for a protest that his students could attend and then write about. Meeting outdoors at relevant landmarks in Greenwood and downtown Tulsa could also still be an option, and would allow teachers to establish the emotional connection that can be lacking in virtual classrooms.

“There is an unsettled feeling here in Tulsa,” he said. “The reality that this atrocity has happened nearly 100 years ago still feels so fresh.” 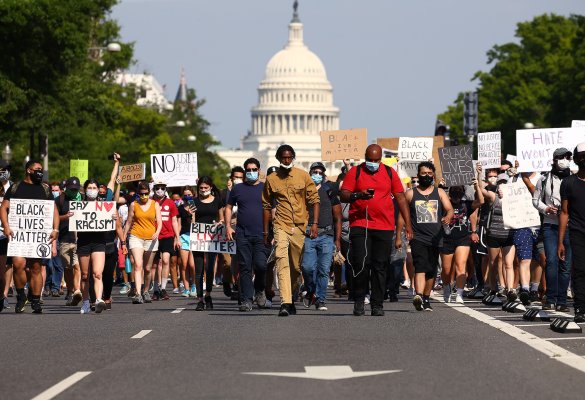 A Problem With the Focus on Whether George Floyd Protests are Nonviolent
Next Up: Editor's Pick