Guy Fieri on Why Restaurant Workers Need Our Support

Guy Fieri, the anointed Mayor of Flavortown, chef, restaurateur and Food Network host, has spent 31 seasons — over 15 years — visiting restaurants across the U.S. for his show Diners, Drive-Ins and Dives. But as the coronavirus pandemic shut down all his culinary destinations, as well as his own restaurants, Fieri found himself at home like the rest of us.

Not that he’s been taking time off: Fieri immediately started filming a remote version of his show, cooking recipes from home provided by chefs around the country. And he jumped in to start helping out his industry while it was under stress.

“When this all went down, the first thing I was thinking about was, ‘How can I help?'” he explained to TIME. “When we have emergencies here in northern California, I go cook. I can cook for large numbers, I know how to deploy a team and get things done. I have a 48-foot rescue trailer that can feed 5,000-plus people a day.” But this crisis was different; food insecurity wasn’t the problem at first — but restaurant workers were struggling. So Fieri decided to start raising money for the Restaurant Employee Relief Fund — to the tune of over $23 million in just the first two weeks, distributed in $500 grants to restaurant employees who were out of work during the early stages of the pandemic.

“I started sending personal vides to the CEOs of each of the major companies that have something to do with the restaurant industry; I think I sent 43 of them out total. I said, ‘Here’s the deal. The restaurant industry has been hit like it’s never been hit before since the Great Depression,'” Fieri explained. An estimated 8 million restaurant workers were impacted by industry-wide shutdowns this spring. “Next day, Pepsi gave us a $1 million, and that got the ball rolling,” Fieri recounted. Netflix also donated $1 million.

Fieri, with his outgoing personality and passion for over-the-top recipes, has long been a lightning rod in the food world. Lately, he’s become an icon of joyful culinary maximalism, happy to engage in things like a virtual nacho battle with Bill Murray. But above everything, he is an evangelist of the local restaurant experience. “They’re kind of like the fabric, the backbone [of our communities],” he said. “Everybody’s had a job at a restaurant; everybody can get a job at a restaurant. It’s where you go for your celebrations, it’s where you go for your donations, it’s where you have your good times and your bad times.” The pandemic, he noted, has thrown into sharp relief just how much we take our favorite food stops for granted, and how “vital” they are to daily life. Fieri has spent his whole career working in restaurants as everything from dishwasher to owner. “Once you’re in this business, and you know what is in this business, you’re part of the family, whether you like it or not,” he says.

As for his focus on the workers? “I think the restaurant owners have a little more cash reserves — not much, maybe a week or two — but a lot of the employees work paycheck to paycheck, multiple jobs in the industry,” he said. “They’re a key, niche group of people, and they really needed support, and they still do.”

That remains true into mid June: while many states are allowing for the phased reopening of businesses and restaurants with new health guidelines and capacity restrictions, the pandemic continues to loom, as does the lost revenue of months of shutdowns. “I can’t even put a finger on it right now, how vast and how complicated this is going to be,” Fieri said of what happens next. “But one great thing about the restaurant industry is we adapt and overcome.”

That’s certainly the case for his show, which has made lemonade out of lemons — by enabling Fieri to bring his favorite meals right to his family, in his backyard, where they cook, eat and film. “I’ve never had this time home. I can’t remember this amount of time home. I take the blessing,” he said. And beyond just cooking for the show, he’s also been in the kitchen whipping up plenty of favorite comfort foods: “I’ve made all the pasta sauces… you name it, I’ve done it. Lot of tacos, lot of different styles of tacos, lasagna, meatballs, carbonara, cacio e pepe, al pastor, carne asade, achiote chicken, made some clam chowder — at the beginning. White chili, Texas chili. It’s been crazy,” he listed off. Fieri may have been temporarily grounded by the pandemic, but his taste for going all-out didn’t change. 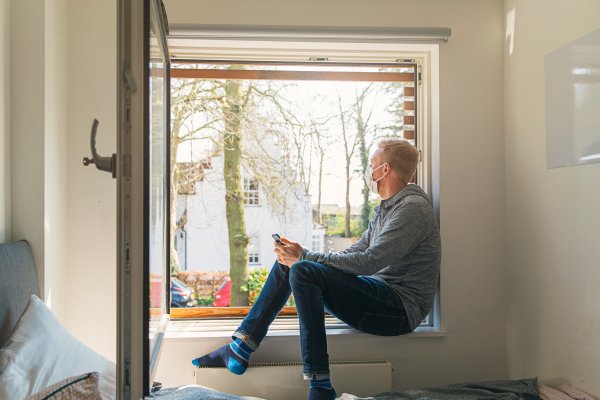 Everyone In My Family Is Vaccinated—Except Me. What's Safe?
Next Up: Editor's Pick