The sign for Fort Bragg in N.C., on Jan. 4, 2020. Defense Secretary Mark Esper and Army Secretary Ryan McCarthy, both former Army officers, put out word that they are “open to a bipartisan discussion” of renaming Army bases like North Carolina’s Fort Bragg that honor Confederate officers associated by some with the racism of that tumultuous time.
Chris Seward—AP
Ideas
By Senator Tammy Duckworth

Duckworth served in the Reserve Forces for 23 years before retiring at the rank of Lieutenant Colonel. She represents Illinois in the United States Senate, where she serves on the Armed Services Committee.

A slave-owner and rumored Grand Dragon of the Ku Klux Klan, Gordon betrayed his nation by serving as a Confederate general during the Civil War, and then used his position among Georgia’s elite to stoke white supremacy long after the last bullet of the war had been fired.

And today, the United States Military that he took up arms against continues to honor his memory.

Situated halfway between Savannah and Atlanta, Fort Gordon is an Army training base for American Soldiers who’ve sworn an oath to defend the Constitution against all enemies of the United States—a category that includes the man whose name is plastered on the base’s front gate.

But it’s not just Fort Gordon. In total, there are 10 U.S. Army bases named after Confederate officers, leading to the sickening irony that we’ve asked generations of Black servicemembers to train at bases that celebrate the traitors who tried to keep their ancestors in chains. When I was just beginning my career in the Army, I trained at one of those bases, Fort Rucker, though I didn’t think enough about the history behind the name at the time.

It is long, long past time for a change.

In this moment of national reckoning, with the pain Black Americans feel laid bare for all to see—when peaceful protestors risk being tear gassed for daring to say that a Black man’s life mattered—it is on each of us to push, prod and even drag our nation closer to living up to words of our Pledge of Allegiance: that in this Republic, there is liberty and justice for all.

Achieving the more perfect union our founders dreamed of will require systemic, structural changes. Many of those changes may not be easy. But other remedies are so obvious, so simple, that the fact that they haven’t already been done is proof of how willing our country has been to ignore the injustices Black Americans face every day.

One of those steps forward is to ensure that the Armed Forces we ask to protect us from enemies foreign and domestic does not pay tribute to those very same enemies. That means renaming these 10 bases, rechristening them with the names of 10 of the many, many heroic troops of diversity in our history who defended this nation so courageously even as our nation treated them so poorly. We must rededicate these bases with the likes of the Tuskegee Airmen and the Buffalo Soldiers, or in the case of Fort Rucker, an Army aviation center, re-dedicating it to a servicemember who actually received a Medal of Honor for helicopter operations, like Rodney Yano. And then we must also ensure that the remaining branches that somehow still have not yet banned public display of the Confederate battle flag must follow the Marines and Navy’s lead in doing so.

As an institution that prides itself on being the ultimate meritocracy, our military has an obligation to stop honoring those who believed that a person’s worth was defined by the shade of their skin—secessionists who chose to gain the label of traitor rather than lose the label of slave-owner.

This isn’t about trying to “erase” history, despite what some, including the President, may claim. Like so many other families living in Virginia during the time of Civil War, my family, too, was split down a historical fault line, with some of my ancestors fighting for the North and others for the South. It’s critical that we remember our history so we can learn the lessons that will help us avoid turning down the same dark corners again. But remembering our history does not mean defending those who defended slavery—a lesson Trump would do well to remember the next time he threatens to veto a pay raise for our troops over this very issue.

Renaming these bases and ending the public display of the Confederate battle flag isn’t just the right path to take for the sake of our national identity, it’s the right path for our national security, too. In the military, unit cohesion is often the difference between life and death. It certainly was for me the day in Iraq that a lucky shot from the enemy nearly killed me before my buddies dragged me to safety, and the same has been true for countless other servicemembers since George Washington crossed the Delaware.

As the Commandant of the Marine Corps wrote when explaining why the USMC would ban the public display of Confederate battle flags, such symbols risk fracturing the “cohesion that combat demands.” Going on to describe the Marine Corps as a “uniquely capable warfighting team whose members come from all walks of life and must operate side-by-side,” he states that this flag “has shown it has the power to inflame feelings of division. I cannot have that division inside our Corps.”

He knows, as I do, that defending American values and defending Americans’ safety are intertwined. He understands that when it comes to addressing our nation’s systemic injustices and protecting us all, doing the right thing and doing the smart thing are one and the same.

Our Black servicemembers—and all of our servicemembers—deserve better than this. As does every American alive today whose great-great-great-grandparent was treated as if they were just three-fifths of a person. As do all those who’ve gathered and marched and grieved together over the past few weeks, channeling their devastation into action, working to bring about a tomorrow that’s no longer defined by yesterday’s prejudices.

Changing our country for the better won’t be easy. But taking this step forward is—and there is simply no justifiable reason not to. 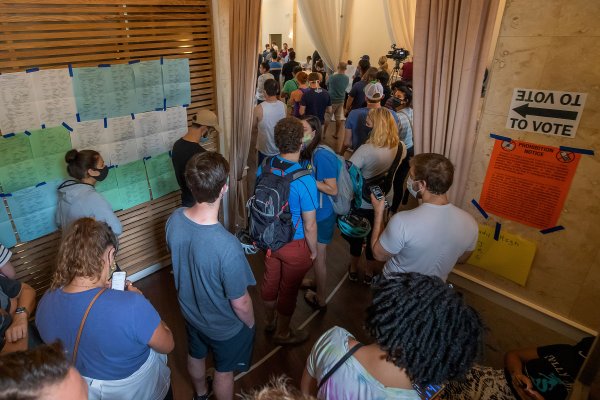 Voter Suppression Obstacle to a Just America
Next Up: Editor's Pick