In the weeks before the coronavirus reshaped the lives of people around the world, Daniel M. Lavery, who writes the “Dear Prudence” advice column at Slate, received an unusual letter. The writer, in the course of asking for tips for dealing with a husband who kept leaving bits of toenail around the house, admitted to dealing with the problem by putting the toenail bits in his coffee cup.

By the time Lavery answered the question in April, the world had changed–and so had his thinking on the issue. As the increased closeness of shelter-in-place orders amplified existing frustrations, what might that marriage look like? “I think about this letter writer a lot,” Lavery says.

Lavery is not alone. Advice columnists have found that their mailboxes are a window into the coronavirus’s effects on the interpersonal and emotional lives of people coming to grips with the crisis, and demand for help coping has been high. Carolyn Hax of the Washington Post added an occasional second weekly live chat to her schedule to accom-modate the volume of letters. Meanwhile, a new pandemic-themed Miss Manners mini e-book, Miss Manners’ Guide to Contagious Etiquette, was released on May 19.

For John Paul Brammer, who writes and publishes the “¡Hola Papi!” advice column, the first such letter was about a canceled commencement: “At risk of sounding dramatic, it feels like an important chapter of my life isn’t going to have an ending, that I’ll feel stunted as a result and that the memory of college will wind up tainted … Intellectually, I know I need to get to a place of gratitude, and I know that takes time. But how do I move on without feeling like I’m missing experiences that have shaped so many other people?”

Brammer’s advice, on March 17, was to “lean into the strangeness of this occasion”–and while those words still hold up, he looks back at them as a snapshot of a moment before the world knew just how disruptive COVID-19 would be. “That letter was still sort of thinking things were bad, but they weren’t going to be lasting as long,” he says. “I think later, the bigness of the whole thing came into clearer focus.”

By a few weeks into the crisis, social distancing and stay-at-home orders had, unsurprisingly, changed the dynamics about which people tend to need to advice. Brammer saw a shift from letters about romantic loneliness to ones about loneliness in general, and an undercurrent of guilt about needing help with anything personal at a time of global trouble. Lavery says that quandaries in-volving loud-snacking colleagues disappeared, as questions about disputes with other household members took on a new level of urgency. His colleagues at Slate, which hosts several advice columns, were also hit by isolation-inflected queries, says a spokesperson for the site. The parenting column was suddenly reaching a readership struggling with the division of childcare after schools closed; the sex column was hearing from folks whose intimate lives were hurt by the stress.

Judith Martin, better known as Miss Manners, has been getting letters from people dealing with canceled events, and says she’s noticed a split between those who have found their priorities clarified–realizing a big wedding matters less than actually getting married–and those who, as she puts it, are showing that “greed always comes out,” by wondering how to maximize gifts when a wedding is no longer happening.

Another bucket of queries, however, has been a nice surprise for her: people wondering how best to express their gratitude for those helping them through the crisis. “I’m usually deluged with mail from people who don’t see why you have to write thankyou notes or why you have to do anything when people do something for you,” Martin says. “I think it’s occurred to people now, and my mail reflects that, that maybe we should be grateful.”

Advice columns have always reflected the concerns of the moment. During the Great Depression, when advice was a particularly popular publishing category, columnist Dorothy Dix observed “a depression in the matrimonial market as well as in the stock market.” (Dix advised young women seeking to beat the matrimonial one not to gamble by compromising their modesty.) A World War II edition of Emily Post’s classic Etiquette came with a supplement that advised avoiding waste by serving smaller portions and encouraged women to write letters to their boyfriends overseas. Martin Luther King Jr. actually wrote an advice column for Ebony in the late 1950s, taking questions on everything from marriage to civil rights, and a Vietnamera letter from a service member to “Dear Abby” sparked a decadeslong program through which her readers wrote to troops.

Today, amid the proliferation of online advice columns, everyone is once again facing a societywide problem. But, says the Post’s Hax, it would be a mistake to assume that everyone needs the same advice about the global health crisis. In fact, she says, one of the most noteworthy things about the pandemic is the unevenness of its psychological impacts. One letter will come from someone who feels “full of self-loathing” for being unemployed after attempting a career change right before the pandemic hit; the next will come from a parent “drowning” because her job expects her to work fulltime while caring for two young children. Hax advised the former to skip the shame, and the latter to give herself “permission to treat this period of your life as an unholy free-for-all.”

Which is not to say that there aren’t some trends. From the beginning, letter writers have asked about how to deal with people who are not handling things the way they would. Hax heard from one reader who was upset about “young healthy people” using grocery pickup slots that could have gone to shoppers in higher risk populations, one who blamed a friend for getting sick, one who was “too angry to sleep, to eat, sometimes … literally holding my breath” about a sibling who was still going on trips in early April. “It’s a whole department of advice now, this finger-pointing,” she says, adding that she tries to remind the finger-pointers–except in extreme cases–that it’s hard for anyone to perfectly follow medical advice that evolves as quickly as it has been lately.

Slate’s Lavery echoes that idea. Often, he says, such clashes have an underbelly that has little to do with the virus; writers, for example, will mention in passing that they might be considered gentrifiers, before asking if they should call the police about a perceived lack of precautions taken by the neighbors who have lived there for years. Even before George Floyd’s death made law enforcement a more urgent topic than COVID-19, Lavery said the advice he thought everyone needed to hear was, unless your life is in danger, don’t call the cops over disputes with neighbors. Now, he says, he’s even more “securely anchored” to the idea that police are not the way to solve problems, especially the kind about which one might write to an advice columnist.

For him, the last few months have been a reminder that being an advice columnist means more than lending an ear. For every letter writer, there are many readers who absorb the answers–and who, especially in times of crisis, may need to hear some version of the same thing. With no delusions of grandeur about his role, Lavery says he nonetheless sees each response as a chance to shift the way readers think about an issue. “I get maybe one or two paragraphs per question, but it’s at least an opportunity to introduce an idea,” he says. “It’s not a radical source of change, but it’s a public conversation.”

As non-pandemic letters re-enter advice inboxes, that function won’t fade–and, perhaps, neither will the coronavirus’s effect on how the columnists approach their work. Hax, for one, says she can no longer assure her readers, “It’ll be fine.” “I have to take that out,” she says, “and just say, ‘How do we make it better in this moment, given what we have?'” 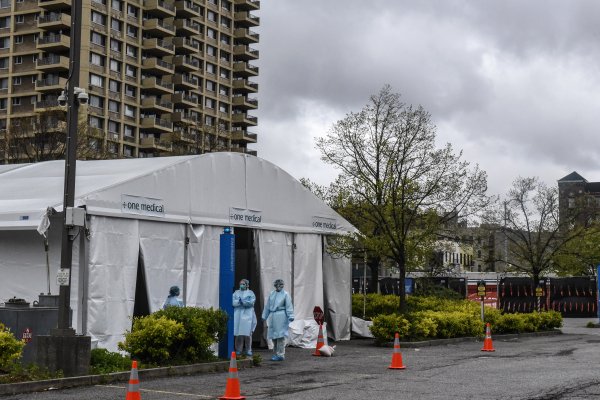 The Many Ways Institutional Racism Kills Black People
Next Up: Editor's Pick