Seattle Protestors Are Occupying 6 City Blocks as an ‘Autonomous Zone.’ Some Fear a Police Crackdown Is Imminent

Amid ongoing national protests over the death of George Floyd, activists in Seattle have declared an “autonomous zone” in a six-block area of the city’s Capitol Hill neighborhood. The move comes after the Seattle Police Department (SPD) beat a tactical retreat from its East Precinct in the historic district on Monday.

“I just wanted to go to a protest and they shot at us, and they threw concussion grenades at us, and they beat us,” artist Maury Diakite told TIME about the SPD over the past week. After police left, activists quickly blocked off the surrounding streets with the police department’s own barricades.

They then declared the space one led by the community and not subject to law enforcement. Activists and protesters collectively crafted a list of social justice demands that seek to address a number of issues from police funding to Washington state education. And while city officials hint that the police absence is meant to “de-escalate” the intense week of clashes between law enforcement and demonstrations, many on the ground and in government fear what the next move may be from law enforcement.

“It’s not a rave. It’s not a festival,” Diakite said of the so-called Capitol Hill Autonomous Zone (CHAZ). “It’s decent, honest, hardworking people that don’t want people getting hurt by the people that are supposed to be protecting them. The whole thing is hopeful and scary.”

Over the past few days, hundreds have flocked to the CHAZ to protest, create art, make music, and socialize. Protesters have collectively mapped out places for communal spots and services, like garbage sorting and aid and food stations. Tuesday night there was a showing of 13th, the Ava Duvorney’s documentary on the racial inequalities in America’s prison system.

Michael Ferguson, the man seen flushing out the eyes of a girl overcome by pepper spray in a viral Seattle image, said the atmosphere in the CHAZ was much lighter than the days of tense protests that came before it.

A local activist and events producer, Ferguson told TIME that he and friends had started giving out coffee to anyone who wants it. “I figure it’s a way to support people whose voices need to be heard and to amplify them and a nice hot cup of coffee should go a long way,” he said.

Omari Salisbury, an independent media producer and affordable housing advocate, said he saw a massage therapist on Tuesday, ready to give out massages. Someone has even created a flag that’s being adopted within the zone and by supporters.

Protesters say that CHAZ is not a frivolous endeavor, however, and published a list of social justice demands on Tuesday.

“This is no simple request to end police brutality,” it stated. “We demand that the city council and the mayor, whoever that may be, implement these policy changes for the cultural and historic advancement of the city of Seattle, and to ease the struggles of its people.”

Among other things, the list demanded “100%” abolition of the Seattle Police Department, rent control, a 911 system specifically for mental health emergencies and free college for Washington state residents.

Ever since Floyd, a black Minneapolis man, died with a white police officer kneeling on his neck, protests have shaken the nation and the law enforcement response has been criticized.

The SPD has faced criticism for what detractors say is an excessive use of tear gas, hospitalizing a young woman with flash bangs and its handling of arrests. The pushback prompted Seattle Mayor Jenny Durkan and SPD Chief Carmen Bestto to announce a 30-day moratorium on the use of tear gas on June 6.

Unrest has rocked the city for several days and culminated into one chaotic day Sunday, when a man drove into a march and shot one demonstrator. “It was like a war zone,” Seattle City Councilmember Kshama Sawant said. “I was there Sunday night. I was gassed and maced.”

Salisbury and Sawant both described how the neighborhood has been inundated with tear gas.

“The people who were actually getting flash banged or hit with rubber bullets were the people actually from the neighborhood,” Salisbury said. “You’ve got a nurse who gets off work at Swedish [Hospital], in his scrubs, he sees a protest going on, he walks with his hands up … he gets hit with tear gas.

The SPD’s East Precinct was emptied out and boarded up on Monday. The SPD, which did not respond to a TIME request for comment, issued a statement saying, ”The East Precinct will remain staffed.”

Protesters, however, claim that the building is empty. “It’s obvious that no one is in there,” Salisbury said. “It’s abandoned.”

Said Diakite: “I just remember we were there and shit just got weird, and the next day the cops were gone—and it’s kind of like, whoa.”

‘A confrontation ahead of us’

The Capitol Hill neighborhood has been simmering for years. It has long been a LGBTQ-friendly district and was a haven for countercultural groups like the grunge movement in the 1990s. But the neighborhood has seen a dramatic wave of redevelopment and a massive influx of tech workers over the past 15 years as Amazon, which calls Seattle its home, rapidly expands. This, compounded with the city’s geographical limitations and political reluctance to increase housing density, made rents skyrocket, which increased Seattle’s homeless population and pushed out people who can’t afford to live there.

Mayor Durkan said Sunday that the police evacuated the local precinct “to proactively de-escalate interactions between protestors and law enforcement.”

On Wednesday, her office released a memo calling the move an “important step in the city’s efforts to lead with de-escalation and rebuild community trust.” The memo also stated that the SPD would continue to answer 911 calls throughout the city. The mayor’s office did not return a request for comment from TIME.

Meanwhile, protesters remain acutely nervous about police retaliation. “I’m waiting,” Diakite, who has been in the area since Saturday, said. “I still think there’s a confrontation ahead of us.”

Anxieties of a police crack down have only risen as President Donald Trump has since weighed in on the budding occupation.

Sawant said she shared this “deep anxiety” about what happens when the police move in and compared the formation of CHAZ to 2011’s Occupy movement when quick organization was key.

“A strategy has to emerge; no occupation can last forever,” the councilmember said.

While police haven’t officially stated their intentions for the precinct, reports suggest that they will return. Local Q13FOX reporter Brandi Kruse tweeted that the SPD wants the precinct “back in service and is interested in discussions that will lead to that.”

For Sawant, that means they might come in by force. “It’s quite likely that they will come in with the brutality that they have already instigated against activists,” she said.

Despite that, protesters say CHAZ is a step toward creating something new.

Diakite says he’s worried about what will happen with the zone and with the city at large. But he said he would keep going back to the area.

“I just can’t let go of the idea of not continuing to be involved in doing the best I possibly can,” he said. “Even if that’s just going and standing in a place.”

The original version of this story misspelled the name of Seattle’s mayor. She is Jenny Durkan, not Jenny Durking. 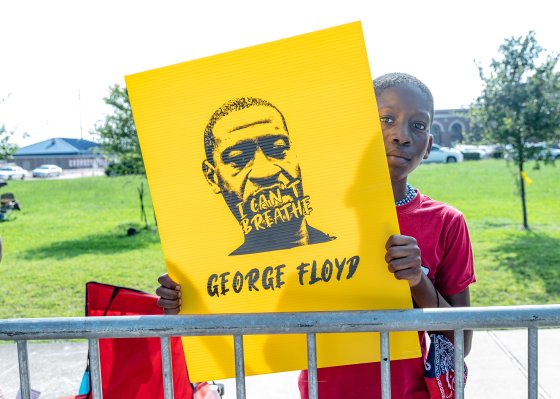 A Family and City in Mourning: Scenes From George Floyd's Funeral
Next Up: Editor's Pick