A protester wearing a mask and carting a sign that reads "Justice" passes a line of New York police on June 4, 2020.
Ira L. Black—Corbis/Getty Images
By Melissa Chan

Many police officers are flouting state orders by not wearing face masks at mass demonstrations across New York City, frustrating city leaders and protesters who say the decision is deliberate and disrespectful.

Despite New York Gov. Andrew Cuomo’s order for all New Yorkers to wear a face covering in public to stop the spread of COVID-19—and NYPD protocol that officers must comply—police officers have been spotted and photographed this week not wearing masks when interacting with protesters at crowded rallies for George Floyd, a black man who died after a white Minneapolis policeman pressed his knee into Floyd’s neck for nearly nine minutes.

“It’s symbolic,” says Cynthia Godsoe, 49, who has participated in three protests since Sunday. “They are blatantly snubbing us.”

For more than two months, New York City was the epicenter of the COVID-19 pandemic, and only in the past two to three weeks has the state’s daily death toll dropped below 100. The city’s daily death roll remains in the double-digits. The state Department of Health website warns that the virus continues to spread and that individuals are required to wear masks and to maintain a 6-foot distance from others in public spaces.

But at two daytime demonstrations in Brooklyn and at a massive protest at Foley Square in Manhattan, Godsoe says most of the police officers she saw had their faces exposed. On Thursday, she saw one police officer in Cadman Plaza Park in Brooklyn, where Floyd’s brother was attending a memorial, passing out face masks to protesters. Most of his colleagues around him were not wearing them, she said.

“It’s unsafe and disrespectful to the public,” says Godsoe, a law professor who lives in Brooklyn. “This is a rule we all have to follow, and they’re sending a terrible message.”

Jack Marth, 56, also attended the Foley Square protest and noticed that most officers did not have their faces covered. “To me, it indicates an arrogant disregard for the wellbeing of the communities they are supposed to be serving and protecting,” says Marth, a Bronx attorney.

“If they’re interacting with the public, they’re obligated to wear masks,” Chernyavsky said at a virtual May 22 public safety committee hearing, which was video-recorded. “We follow the direction from the Department of Health.”

City police officers aren’t the only ones not wearing masks. Officers caught on video in an incident in Buffalo, N.Y., in which a 75-year-old man was pushed by a policeman onto the sidewalk, also were not masked. All of the helmeted officers had plastic shields on their headgear, but not all of them had their shields pulled down to cover their faces. The man who was shoved was wearing a mask.

Police at a protest demanding an end to racism and police brutality on June 4, 2020 in New York.
Tayfun Coskun—Anadolu Agency/Getty Images

President Donald Trump also has failed to wear a mask, despite U.S. health officials urging the public to do so.

The NYPD has previously said it was “hit hard” by the pandemic, losing at least 43 members in the department to the coronavirus, which forced thousands more to call out sick.

It’s unclear whether protocols have shifted since protests erupted in the city following Floyd’s death. In a brief and vague statement to TIME, the NYPD only said it was “working as fast and safely as we can to process arrests during this unprecedented time.” The city’s police unions did not respond to requests for comment.

During a Friday interview with journalist Brian Lehrer, Mayor Bill de Blasio said he was “frustrated” that police officers were not donning masks and that they’re “supposed to wear face coverings in public, period.”

“There is a double standard,” the mayor said, “and that’s not good.”

Guidelines by the U.S. Centers for Disease Control and Prevention (CDC) and the World Health Organization, issued as of Friday, say people should wear fabric face masks to prevent the spread of COVID-19 even if they are healthy. Since early April, the CDC has recommended wearing masks, which are supposed to cover both the nose and the mouth.

By not wearing face masks, police officers who are asymptomatic increase the risk of spreading the virus, according to Dr. Amesh Adalja, a senior scholar at the Johns Hopkins Center For Health Security, who specializes in infectious diseases.

NYPD officers arrest protesters during a demonstration against the killing of George Floyd by Minneapolis police on May 30, 2020 in Brooklyn.74
Bryan R. Smith/AFP—Getty Images

“If police officers, who are infected with the virus, are shouting and yelling within 6 ft. of other people, they are emanating a lot of particles out of their mouth because they are speaking very forcefully,” he says. “That would facilitate asymptomatic transmission.”

Adalja says he believes it’s probably a lower risk of transmission, since most asymptomatic transmissions are occurring in homes where there’s closer contact. Face shields—which some police officers are wearing—are more effective for those who are not exhibiting symptoms, Adalja says, but officers should be wearing masks at a minimum to prevent further spread.

“If a state, if a county, if a city is telling the general public to wear masks,” he says, “then the police officers must follow that same law.”

City Councilman Donovan Richards (D-Queens), who chairs the council’s public safety committee, hounded police leaders last month to elaborate on the NYPD’s protocols for wearing face masks on duty after witnessing police interactions in his community. He said it’s hypocritical that officers who were enforcing social distancing guidelines weeks ago are now the ones not wearing masks at mass gatherings.

“There should be no one above the law, and this is why things have bubbled up,” he says. “The hypocrisy, it plays right into why this powder keg has ignited.” 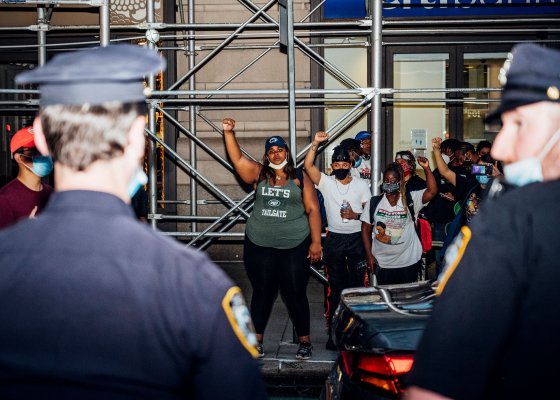 Activists Disagree on How to End Police Violence
Next Up: Editor's Pick