Black Excellence Is Not Just a Hashtag. It’s an Economic Lifeline

A mural of George Floyd in central Manchester, Britain on June 4, 2020.
Chine Nouvelle—SIPA/Shutterstock
Ideas
By George The Poet
George the Poet is a London-born spoken word artist and podcaster of Ugandan heritage. His brand of musical poetry, as featured in multi-award-winning series 'Have You Heard George's Podcast?', brings together artistry and advocacy for the empowerment of underrepresented voices.

When I first saw the news about George Floyd, it was a thumbnail with a summary describing a police officer kneeling on a man’s neck. I chose not to pursue that news item. I didn’t want to think about where it would take me, because I knew I would be confronted by my own helplessness. That feeling has become familiar, linked to a particular pattern of violence in which the common denominator is the color of our skin.

These events hold deep resonance in the U.K. It’s very hard as Black Britons to keep our story on the forefront of the national agenda. And as conflicting as it is, the attention and outrage that is felt around African American injustices is useful to us in explaining what we are going through here.

This moment presents us with opportunities. It is a time in which we are reminded that we have common problems, and despite the distance and diversity between us as Black people, we have to find common approaches to solving those problems. It has recently dawned on me that much of white Britain doesn’t culturally identify with white America in the way that Black Britain often does with Black America. It’s therefore understandable—though not excusable—that so many of our white compatriots struggle when their society is shamed for producing similar racist outcomes to the U.S. The entrenchment of racist ideology across the West is not part of our compulsory education. White people often find themselves bewilderingly late to the conversation, and revert to a defensive stance. But come on. Over here, Black men have double the unemployment rate of white men, Black children are four times more likely to be arrested than white children and Black women are five times more likely to die in childbirth than white women. Blackness and whiteness occupy different areas of modern society. There is, of course, a flipside to this; our artistic tradition also holds its own unique place in the world.

Not by consensus nor intention, but by default, we are a political bloc confronted with social and economic disadvantages that show up everywhere, irrespective of our individual lifestyles. African Americans have a fraction of the wealth of white Americans. A report in 2017 showed that 40% of Black households in the U.K. are living in poverty. This is not something we’ve coordinated, and it’s not a coincidence. What we have in common that drives our economic conditions is a shared history of exploitation, interference, sabotage and abuse at the hands of white societies. All of that comes rushing back when I see Derek Chauvin’s knee on George Floyd’s neck.

I grew up in one of the blackest parts of the U.K. St Raphael’s Estate, my neighbourhood in North West London, is 46% Black, while the U.K. has a population that is 3% Black. The first thing you know is your family, then you know your street, then pretty quickly you know the world. The messages you receive about this world travel through the media, and those stories will plug you in to a broader narrative of what your dark skin means. My mum used music, and she played me Bob Marley’s Buffalo Soldier when I was too young to know how old I was. She used each line to explain the transatlantic slave trade. Over the years, as my consciousness took shape, I listened to more rap music and heard things that aligned with the reality I was living in. Eventually, studying Sociology at school and then university taught me how to frame the common narratives of rap music academically. Two books that do this expertly are: Natives by (actual rapper) Akala and Why I’m No Longer Talking to White People About Race by Reni Eddo-Lodge.

For Black people, our position in the economy is preventing us from building momentum against the effects of racism. Career is how we all make money, and therefore dictates our time. If our attention is dispersed across the economy in a way that does not reflect our common history, then we are unable to unify our energy against the problem in an organized, sustainable manner. What we need is an understanding across the economy, between Black people, that we are committing to strengthening our response to racism. I’m talking about a plan on a scale we haven’t seen in our lifetime. It’s ambitious, but we now have the technology and more importantly the historical lessons to redesign our freedom strategy. This is not going to happen overnight, but in the arts and entertainment industry, this is very much underway.

To plan an economic route for Black children, we’d need a strong starting point; one that sensitively acknowledges the past but offers a truly blank canvas for the future. Through arts and entertainment, Black people have refined this approach for a century. From Jazz to Ska to Hip Hop to Grime to Afrobeats, our musical innovations have passionately explained our journey, giving insight into our distinct intellectual brilliance, winning over the hearts and minds of onlookers worldwide, and most importantly, introducing wealth into communities that were at best overlooked, at worst brutalised by their governments. We have something here. 2019 saw a 19% rise in the use of stop and search among London’s black population. That same year, sales of UK rap singles rose by 20.9% – driven largely by London’s black youth.

People often bemoan the stereotype of Black public figures falling into the sports and entertainment categories. It is a trope that carries connotations of inferior intelligence – but where did that association come from? Who, at some point in their lives, hasn’t viewed sporting and artistic excellence as the perfect distillation of human potential? Furthermore, who says we can’t build our presence in other professions around this foothold? Your favourite artist has a legal team. Your favourite athlete has a medical team.

We all have a part to play in reversing the effects of racism, but I would argue that no industry has had a greater influence on race politics than entertainment. The unique advantage that we have in the arts is the focus on our story; in this space, our economic activity is tied to the social needs of our community. Do we need more rappers? We need the wealth rap generates, and the discursive space it creates. We don’t have a combination like that anywhere else in the economy. Do we need more athletes? We need to capitalize on the respect they command, and apply it beyond the sale of products that have nothing to do with our struggle. Our focus should not be on convincing white people to work and think in a different way, as great as that would be. Instead, we should concentrate on playing to our strengths and reinvesting our diverse skill set into the political bloc we find ourselves in by default. Black excellence is not just a hashtag: it’s an economic lifeline. 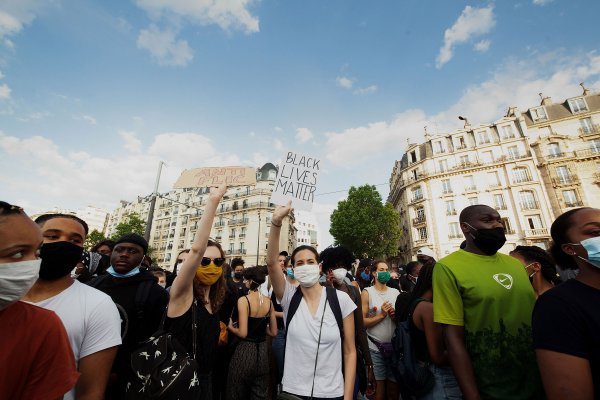 George Floyd Protests Spark a Reckoning Around the World
Next Up: Editor's Pick