Why the Protests in the U.S. Are an Awakening for Non-Black People Around the World

Ideas
By Yassmin Abdel-Magied
Yassmin Abdel-Magied is a Sudanese-Australian writer, broadcaster and award-winning social advocate with a background in mechanical engineering. Her books include the best-selling memoir, Yassmin's Story, and the novel for younger readers, You Must Be Layla.

The United States is alight with the flame of revolution. Like wildfire, it spreads, and it has been a long time coming. But revolution is borderless, and racism is not solely an American problem.

Though the murder of George Floyd at the knee of police was the most recent spark, the fuel has been pouring for decades. Widespread police brutality in an environment of racialized poverty and inequality have led Black people in the United States to feel there is no option but to overwhelm the streets. Years of peaceful protest and court proceedings brought neither change, nor justice. And so, uprisings; the ferocious cry of the unheard.

The structural racism underlying police brutality in the United States thrives globally, including in Australia and Britain. In England and Wales, young Black people are nine times more likely to be locked up than their white peers and in Australia, Aboriginal and Torres Strait Islanders account for 28% of the prison population, despite only making up 3.3% of the total Australian population. The statistics are devastating in their conclusion: Britain and Australia disproportionally kill and incarcerate Black and Indigenous people. For those whose bodies are not directly violated, equity of opportunity is still a long way off. The system of white supremacy is alive and well.

This “selective amnesia” conveniently extends back centuries, eliding over the fact that the British Empire was effectively responsible for the concept of race and racism. The Barbados Slave Code of 1661 marked the beginning of the legal codification of slavery, establishing the concept of “Black” and “white” races and the racial hierarchy between them. Enslaved people who were Black were deemed “slaves,” property into perpetuity, whereas white people (Irish, English, Scottish) would be labeled ‘indentured servants’, property only for the length of their contract. As Barbados was the first English colony to create a set of slavery laws, these laws created the foundation ideology for white supremacy that continues to smother Black lives and dreams today.

Not only are the British often quick to deny their links to the origins of racism and forget their role in pioneering the transatlantic slave trade, they also ignore how they built an entire nation based on the concept of ‘whiteness’ they so treasured. Australia, the country I grew up in, was that very project. When James Cook declared it “nobody’s land” (Terra Nullius) in 1770, he erased 65,000 years of Aboriginal and Torres Strait Islander inhabitancy. This meant no obligation to get consent to settle, and the freedom to murder Indigenous people with impunity. Those who survived were declared subjects of the British Crown and forcibly “assimilated.” Whiteness continued to be the nation’s aspiration, furthered by the Immigration Restriction Act of 1901, a bill that introduced the “White Australia Policy,” forbidding non-European migration. The policy was only officially dismantled by 1973.

Australia has never formally acknowledged its racist and genocidal history, and so unsurprisingly, the amnesia persists. “When I see things like George Floyd, I’m just very thankful for the wonderful country we live in,” Australian Prime Minister Scott Morrison said earlier this week, warning against importing overseas divisions to Australia while hundreds of protesters gathered in Sydney. He conveniently forgets that the very existence of his “wonderful country” is contingent on the violent and enduring oppression of Aboriginal people. Too many Australians prefer to live in wilful denial rather than face the brutal specter of their history.

The British are able to deny their racist history because the worst occurred not on English soil, but in the colonies. They sought to offshore their racist brutality, attempting to buy themselves a semblance of plausible deniability. Out of sight, out of mind. But racism has a long history on British soil too. From Enoch Powell’s ‘Rivers of Blood’ speech, to racism in schools and sport and politics, there is no version of Britain that has existed without it.

There have been countless sparks. Why did this one catch? Why was George Floyd’s murder the one to light the fire of sustained protests in the U.K. and Australia, rather than Mark Duggan or David Dungay Jr? Why now?

I find myself unable to answer. This has long been the lived reality of Black and Indigenous peoples. I’ve traveled to over 20 countries educating companies and leaders on inclusion, bias and tackling structural inequality, but have often been frustrated by the lack of genuine and sustainable change. People seem willing to accept they might have racial “unconscious bias,” a sanitized way of saying “internalised racism.” but balk at doing the unlearning, tackling structural change, committing to anti-racism.

Perhaps that is what’s changing — or at least, I hope so. These uprisings do not appear in a vacuum. They come on the heels of a devastating global pandemic, a phenomenon that has demonstrated with crystal clarity, the failure of states to fully protect their citizens, especially those from Black communities. After months of economically and socially devastating lockdown, there is not only undeniable evidence of systemic inequality. There is also the time and space for people to grapple with the reality of structural racism. In lockdown, there is nowhere else to go, and nothing else to look at.

This is not an awakening for Black people, who have known this reality since we were classified ‘Black’. This is a moment of awakening for white people, non-Black people, non-Indigenous people. People who have, through the experience of the pandemic, some perhaps for the first time an understanding of what it means to be at the mercy of a “system.” Who now have no excuse for not doing the work they have to do.

What has always been needed is systemic change. Systems and institutions need to become anti-racist. And here’s the thing: institutions are made up of people, like you. Systemic change begins with you. It is incumbent on you, reader, to commit to anti-racism, in yourself, your work, your daily practice. The policies and reforms that are required for transformative change need a critical mass of support. To dismantle the system of white supremacy that has killed us and erased our humanity for centuries, we need you to commit to being anti-racist.

Commit to doing the work, so we don’t have to be here again. And commit to doing it long term, even once the headlines have moved on. Remember the privilege in the choice to learn about racism, rather than live it. I will still be Black after it stops trending — and my life should still matter then.

— With reporting by Suyin Haynes 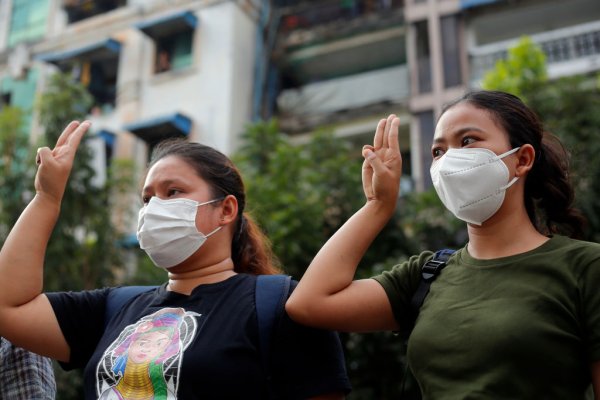 Myanmar's Youth Could Determine the Outcome of Protests
Next Up: Editor's Pick