Russia Declares Emergency Following Spill of 20,000 Tons of Oil in the Arctic Circle

Russian President Vladimir Putin declared a state of emergency in the city of Norilsk after a massive oil spill in the Arctic region. An estimated 20,000 tons of fuel from a power plant spilled onto a road, and a large part made its way into an river on May 29.

A “considerable amount” of the oil seeped into the Ambarnaya River in Siberia, Putin said Wednesday during an official meeting about response to the fuel leak. The President appeared shocked to learn that local authorities were first flagged to the incident by social media—two days after it happened and criticized the region’s governor Alexander Uss during the televised meeting, Reuters reported. “What — are we to learn about emergency situations from social networks? Are you alright healthwise over there?” Putin said.

The leak was caused by “accidental damage to a diesel fuel storage tank” at a plant operated by a subsidiary of Norilsk Nickel and a cleanup effort is underway. The company, which is a major producer of palladium, high-grade metal nickel, platinum and copper, said it would “do its maximum” to resolve the issue Tuesday on Twitter.

The government’s environmental agency is assisting the company with “joint aerial inspections” of the river to “search for possible diesel contamination occurrences” Norilsk Nickel said in a statement Wednesday.

They said in a statement Thursday that the “incident could have been caused by soil thawing” and ruled out “negligence in operating the tank” after inspecting the scene. “The tank is inspected every other year. There is a whole list of criteria for the inspection, which normally results in the tank tagged as serviceable,” he explained,” said Sergey Dyachenko, Nornickel’s First Vice President and Chief Operating Officer.

It remains unclear what the cause of the spill may be. Dmitry Streletskiy, a professor at George Washington University, told Bloomberg, “The cause is yet to be determined and is likely a combination of both climate change and infrastructure-related factors.”

The Arctic region is particularly fragile and the overall damage could be immense. Oleg Mitvol, former deputy head of Russia’s environmental watchdog Rosprirodnadzor, said there had “never been such an accident in the Arctic zone,” the BBC reported. Mitvol said the clean-up could take between five and 10 years and cost 100 billion roubles ($1.5 billion). 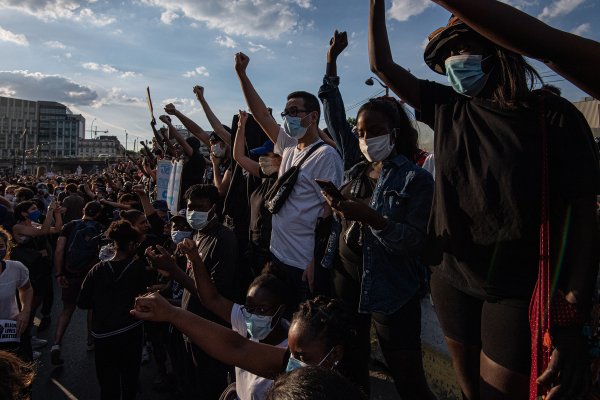 Why Protesters Are Taking to the Streets of France to Fight Police Brutality
Next Up: Editor's Pick