Painting by Titus Kaphar for TIME
Ideas
By D.W. Pine
D.W. Pine is the Creative Director at TIME.

For the June 15, 2020, cover on the protests surrounding the death of George Floyd, we turned to prominent American artist Titus Kaphar.

Kaphar’s 60″x60″ oil painting, titled Analogous Colors, features an African-American mother holding her child. To complete the work, Kaphar cut out the canvas to show a mother’s loss: Floyd called out to his deceased mother during the 8 minutes and 46 seconds he was pinned to the ground by a Minneapolis police officer.

“In her expression, I see the black mothers who are unseen, and rendered helpless in this fury against their babies,” writes Kaphar. “As I listlessly wade through another cycle of violence against black people, I paint a black mother … eyes closed, furrowed brow, holding the contour of her loss.”

For the first time, surrounding Kaphar’s painting, the red border of TIME includes the names of people: 35 black men and women whose deaths, in many cases by police, were the result of systemic racism and helped fuel the rise of the Black Lives Matter movement. Their names are merely a fraction of the many more who have lost their lives because of the racist violence that has been part of this nation from its start.

In a piece accompanying the painting, Kaphar writes, “This black mother understands the fire. Black mothers understand despair. I can change nothing in this world, but in paint, I can realize her. That brings me solace … not hope, but solace. She walks me through the flames of rage. My black mother rescues me yet again. I need to be sure that they can see her. I want to be certain that her story is told. And so this time, America needs to hear her voice.”

Read “I cannot sell this painting” by Titus Kaphar.

Kaphar, who received an MFA from the Yale School of Art and was the recipient of a 2018 MacArthur Fellowship “Genius” Grant, also created a painting for TIME in 2014 marking the protests in Ferguson, Yet Another Fight for Remembrance, which captured black protestors, arms raised up and obscured with layers of white brushstrokes.

His commitment to social engagement has led him to move beyond traditional modes of artistic expression: Kaphar established NXTHVN, an arts incubator and residency program based in New Haven, Conn. His work is in the collections of The Museum of Modern Art and The National Portrait Gallery in D.C., among others

Painting by Titus Kaphar for TIME

“I have given up trying to describe the feeling of knowing that I can not be safe in the country of my birth,” says the 44-year-old artist, who was born in Kalamazoo, Mich., and now works in his New Haven studio. “How do I explain to my children that the very system set up to protect others could be a threat to our existence? How do I shield them from the psychological impact of knowing that for the rest of our lives we will likely be seen as a threat?” 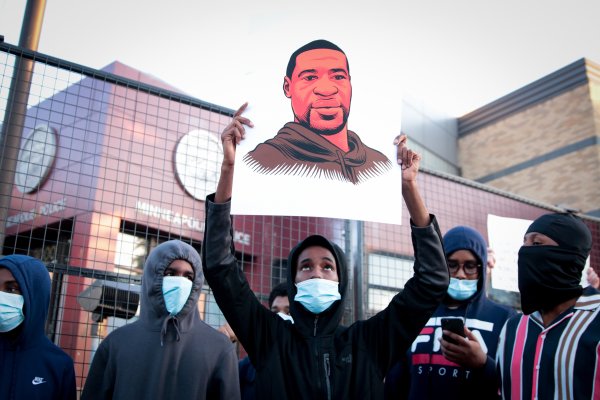 Column: There Is No Right Way to Fight for Your Life
Next Up: Editor's Pick