Trump Said He Would Terminate the U.S. Relationship With the W.H.O. Here's What That Means

The World Health Organization(WHO) has driven the charges leading to some of the 20th century’s greatest public health triumphs. And throughout WHO’s 72-year history, the U.S. has been the organization’s star player, coach, and biggest sponsor. During the WHO’s latest funding cycle, the U.S. contributed $893 million—15% of the entire budget and more than twice as much as any other country. That has been the norm for decades and put the U.S. at the center of the world’s most important public-health apparatus.

Then came Donald Trump and COVID-19.

On April 14, by which time it had become clear the viral disease had inextricably burrowed into the U.S. populace, the President alleged at a press conference that the coronavirus’ spread in the country was probably the WHO’s fault, not his Administration’s. “I am instructing my Administration to halt funding of the World Health Organization while a review is conducted to assess the World Health Organization’s role in severely mismanaging and covering up the spread of the coronavirus,” he said. “Everybody knows what’s going on there.” About a month later, on May 18, he expounded on that “what” in a letter to WHO Director General Dr. Tedros Adhanom, making a number of allegations—many false or misleading—about the organization’s efforts in the early days of the pandemic. Trump concluded that if the WHO did not commit to “major substantive improvements within the next 30 days,” he would make the temporary freeze of U.S. funding to WHO permanent, and “reconsider” membership in the organization.

Trump did not specify what improvements he wanted to see. In any case, on May 29, in a speech in the White House Rose Garden, the President said the U.S. would terminate its relationship with the WHO.

A U.S. president cannot snap their fingers and sever this relation; under U.S. law the country must give the WHO a year’s notice, and must meet its financial obligations to the organization for the current year. So, at the least, nothing would really change until mid-2021—by which point Trump may no longer be President and his successor may revoke the decision—and until the U.S. pays off the $60 million it currently owes the WHO.

However, Trump’s rhetoric has already had an impact on the WHO’s operation: negotiations for new funding are currently on hold, says Imre Hollo, director of planning, resource coordination and performance monitoring for the organization. And while the majority of WHO programs have been pre-funded through 2020, the organization anticipates feeling the funding gap “more completely in 2021,” says Hollo as many of its current financial agreements come to an end at some point this year. Despite that, he remains optimistic that the WHO will patch up its relationship with the U.S.; so is his boss, Dr. Tedros, who said on June 1, “The world has long benefited from the strong, collaborative engagement with the government and the people of the United States…. It is WHO’s wish for this collaboration to continue.”

If it doesn’t, there would be some clear and specific impacts on the global effort to improve public health. In broad terms, the WHO’s funding can be broken down into two categories: “assessed” and “voluntary” contributions. Assessed contributions are the dues each country pays to be part of the WHO, and are determined, more or less, by each country’s gross national income, population and debt. For WHO’s 2018-2019 funding cycle, the U.S. got by far the world’s largest invoice, at about $237 million.

But perhaps more important to the future of the WHO and global public health are the voluntary contributions. For 2018-2019, the U.S. voluntarily added some $656 million to the WHO’s coffers, nearly twice as much as any other country.

Unlike the assessed dollars, which go into the general WHO pot and are spent at the organization’s discretion, voluntary contributions can be earmarked by the giver for specific uses. For example, the U.S. put some $166 million towards polio eradication during 2018-19 and has funded the effort with similar enthusiasm for years—one of the major reasons why the world is literally a few dozen cases away from total eradication. Other benefactors such as the U.K, The Gates Foundation and Rotary International also commit contributions specifically for WHO’s polio work, certainly, but were would the effort be should the U.S. disappear?

Worse off still might be the programs geared towards preventative care. The U.S., for example, accounts for over 40% of the WHO’s budget to “increase access to essential health and nutrition services”—and all of the U.S. contributions to that program are voluntary. Programs that focus on tropical disease research, HIV and hepatitis, and tuberculosis are other likely victims if the U.S. does withdraw from WHO. “It’s always easy to fundraise for panic,” says Hollo. “It’s hard to fundraise for preparedness.”

The impacts wouldn’t be felt just abroad. Were the U.S. to leave the WHO, scientists and public health officials in the states would suddenly find themselves cut off from some of the most important global health communication channels. You don’t need to look too far into the past to see how this might play out: In the early days of COVID-19, “not all of the data from China was public. It was shared among the WHO member states initially before it was put out in public bulletins,” says Amanda Glassman, executive vice president of the Center for Global Development, a nonprofit think tank, That information, in theory, should have enabled U.S. health infrastructure to rapidly spring into action, and take steps to mitigate the worst viral outcomes. It didn’t of course, but that failure can hardly be pinned on the WHO.

“No one’s saying that the organization is perfect, but it works as well as it could,” says Glassman. Ultimately, the U.S. must cooperate with other nations to protect Americans against global health threats, she says. “We have to negotiate, to converse with them, to get into them, and to work together. The WHO is the way to do that.” 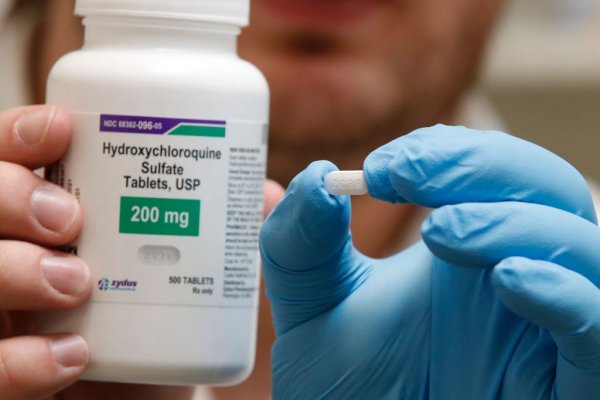 WHO Resumes Study of Hydroxychloroquine to Treat COVID-19
Next Up: Editor's Pick