As protests over police racism and racial inequality have spread to more than 140 U.S. cities in the week since the death of George Floyd, the world has been watching.

Demonstrators have marched through streets or gathered at U.S. embassies in Canada, the U.K., Germany and beyond, both to express solidarity with American protesters and to highlight systemic inequalities at home.

The world’s media is paying attention too. Front pages and editorials from France to Mexico to China have discussed Floyd’s death, the violent repression of protesters by law enforcement, and the divisive response to the protests mounted by President Donald Trump; over the last week the president has blamed the unrest on Democrats, quoted a 1960s southern sheriff’s threat to shoot looters in black neighborhoods, and threatened to bring in the army if “liberal governors and mayors” don’t get tougher on demonstrators.

Criticism, coming from traditional allies and longtime antagonists of the U.S., has often been scathing, both of the president’s leadership and what this week means for America’s place in the world.

In France, the editorial board of left leaning-broadsheet Le Monde wrote “two images of the U.S. that have collided this week.” First, the image of SpaceX’s launching a new rocket and its successful landing at the International Space Station; “a new episode of American genius in the space race.” And second, “the unbearable image, seen by millions on social media, of a black man on the floor, handcuffed and suffocating under the knee of a white policeman.”

Of President Trump, the paper wrote, “in avoiding any expression of empathy for the victims of the injustice, and in refraining from speaking about the root of the problem and only highlighting the violence of rioters, [Trump] has remained faithful to the tactic he’s used since his rise to power: division and confrontation.”

In the U.K., where the Conservative party government has sought to bolster an alliance with the U.S. since it exited the European Union, the Foreign Secretary declined to comment on events in the U.S. over the weekend.

But newspapers took a more critical stance. “Mr Trump is trying to craft a divisive narrative of random, violent protesters at war with good cops,” wrote the editorial board of broadsheet the Financial Times. “Americans should not buy it. […] The only way to end the [racial injustice in the U.S.] will be to acknowledge that race and economic inequality are profoundly connected. Solving the Covid-19 crisis, police violence, unemployment and most other US problems will require connecting the dots between the two — something this president has shown himself incapable of doing.”

“Trump declares War on America,” ran a headline in the Suddeutsche Zeitung, one of Germany’s largest newspapers, on Tuesday.

For decades, the German school curriculum has placed an emphasis on the country’s history with Nazism. Students are taught how Adolf Hitler, who was democratically elected, used divisive rhetoric and the country’s military to consolidate himself as a dictator.

“Of all the possible ways to deal with the riots, Trump has chosen the toughest,” reads the editorial, addressed at an audience all too aware of the historical comparisons. “Instead of trying to calm the situation, the president is escalating and threatens to use the military against his own citizens.”

“Americans are used to white cops killing black people, but this case was particularly shocking,” it added, referring to the death of George Floyd.

Trump’s response would have provoked fierce condemnation by international governments if he was the leader of a “non-western country,” said a comment piece in India’s second-biggest English language daily, The Hindu. “Imagine if it was a non-western President, who called the protesters “thugs”, threatened to shoot them and used the country’s military against them, and posed for a photo in front of a worshipping place, holding a religious text aloft, after clearing the peaceful protesters using force,” it said. “The U.S. State Department would have immediately condemned the government, and called for respecting human rights.”

“But this time, the country that witnesses violent protests, police brutalities and presidential threats is none other than the United States of America”

India is no stranger to social unrest. In February, riots in the capital New Delhi left more than 50 people dead, most of them members of the Muslim minority. It was the worst religious violence in years, and the city’s police and the ruling Hindu nationalist government were accused of turning a blind eye. On Twitter, some Indians — both in India and in the diaspora — called out supporters of the government sharing messages of condemnation about the death of George Floyd, suggesting the same people failed to condemn the religious violence on the streets of Delhi.

In China, one of President Trump’s biggest rivals, officials have condemned the U.S.’ “double standards” in criticizing the Chinese government’s authoritarian response to protesters in Hong Kong, and Chinese state media has used the unrest to question the sincerity of the U.S.’ commitment to human rights.

People’s Daily, the Chinese Communist Party’s flagship newspaper, published a cartoon featuring a police officer’s uniform beneath the cracked facade of the Statue of Liberty with the tagline “Beneath human rights.”

Global Times, a tabloid overseen by the Chinese Communist Party, compared the president’s behavior unfavorably to Barack Obama’s handling of high profile episodes of police brutality. “Obama’s successor Donald Trump has done nothing [to appease protesters]. […] This is in line with his habitual “speaking loud but acting little.”

“In a year of elections that are particularly important for Trump, votes from the black community do not matter that much. After all, Trump won just 8 percent of African American voters four years ago. Black voters are always the base of the Democratic Party. So as protests escalate across the country, Trump played the same old political games by shaming Minneapolis’ Democrat mayor and retweeting an account urging Minnesotans to vote Democrats out of office. As the pandemic gets severe, the economic card doesn’t work anymore for Trump. Passing the buck is his trump card.”

In Pakistan, which has a longstanding, if strained, military alliance with the U.S., the country’s newspaper of record, Dawn, ran an editorial under the headline “Trump on the Warpath.”

“What Mr Trump is signalling clearly is that he will not tolerate criticism or evaluation, and that no matter how unpresidential his actions are, he will push back,” the editorial board wrote. “Not only is this attitude unacceptable in a democracy, it is yet another alarming reminder that an impulsive and authoritarian leader is at the helm of affairs in a global superpower. At a time when the world is combating a pandemic which has overwhelmed healthcare systems and crippled economies, the president of the United States is throwing his toys out of the proverbial pram to make a point — that, too, a dangerous message loaded with threats.”

In Mexico, La Jornada newspaper expressed concern at the scale the unrest could reach north of the border. “The U.S., seems to be on the edge of an abyss with incalculable consequences for its own population, but also for the rest of the world. And it doesn’t seem likely that the insanity reigning in the White House will contribute to avoiding a catastrophe.”

Most Popular on TIME
1
Third Wave of COVID-19 in U.S. Is the Worst
2
Amazon’s Pandemic Conspiracy Thriller Utopia Is the Wrong Show at the Wrong Time
3
Why Trump's Re-Election Is Likely Hinged on Florida 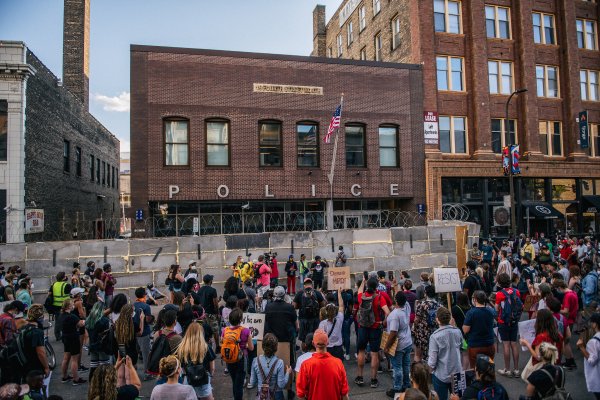 Texas Man Accused of Shooting at Minneapolis Police Station
Next Up: Editor's Pick